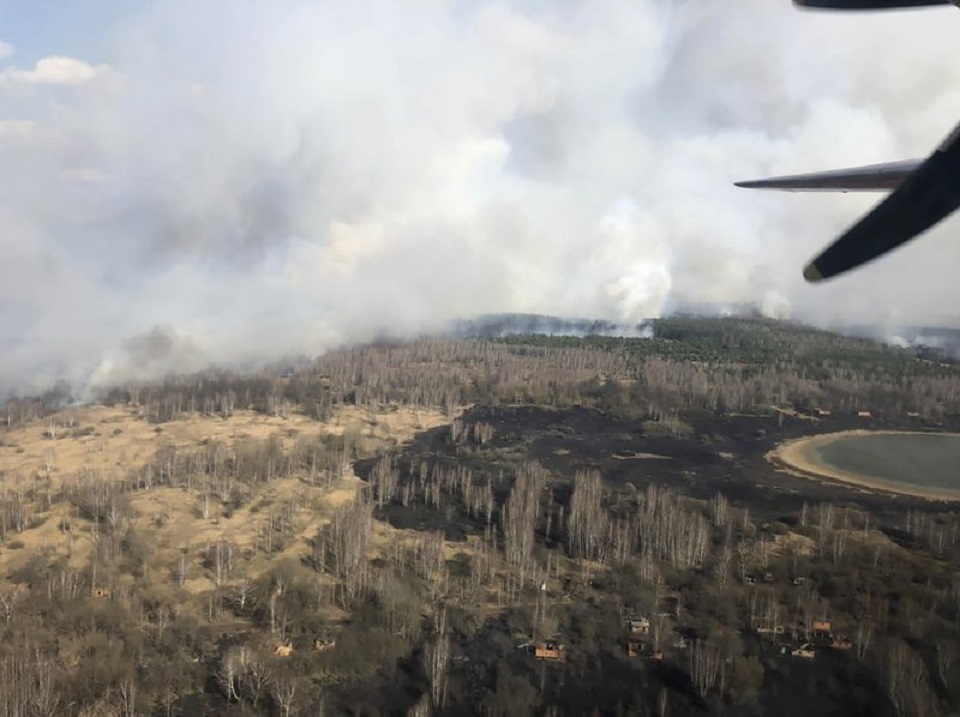 In this photo made on Saturday, April 4, 2020, an aerial view of a forest fire burning near the village of Volodymyrivka in the exclusion zone around the Chernobyl nuclear power plant, Ukraine. The fire was still burning on Sunday, April 5, Emergency Ministry firemen kept extinguishing the fire. (Emergency Situation Ministry via AP)

KYIV, Ukraine, April 6: Emergency teams in Ukraine on Monday continued battling a forest fire in the contaminated area around the Chernobyl nuclear power plant that has raised radiation fears.

Two blazes erupted Saturday in the zone around Chernobyl that was sealed after the 1986 explosion at the plant.

Firefighters said they have managed to localize one of the fires in an area of about five hectares (12 acres), but the second one continued burning, covering about 20 hectares (50 acres). They said they were using aircraft to extinguish the blaze.

The 2,600-square-kilometer (1,000-square-mile) Chernobyl Exclusion Zone was established after the April 1986 disaster at the plant that sent a cloud of radioactive fallout over much of Europe. The zone is largely unpopulated, although about 200 people have remained despite orders to leave. Blazes in the area have been a regular occurrence.

US urges Americans in Ukraine to leave country: State Dept

WASHINGTON, Feb 11: The United States has issued a new advisory urging Americans in Ukraine to leave the country at... Read More...