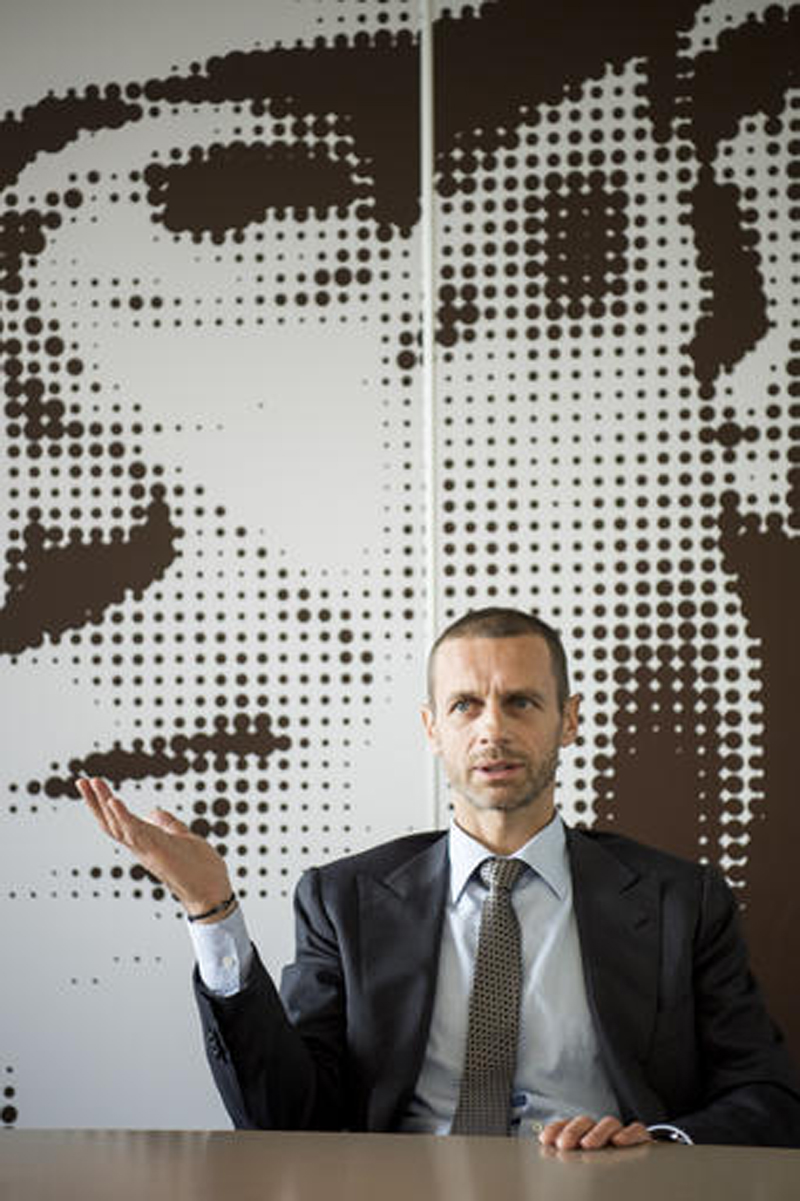 UEFA President Aleksander Ceferin gestures during an interview with The Associated Press, at the UEFA Headquarters in Nyon, Switzerland, Thursday, Oct. 20, 2016.

In an exclusive interview with The Associated Press, Ceferin said he will revive an open bidding process for the right to host the climax to the European club season and is open to the game being staged in New York.

"Iit might be an idea in future but we have to speak about it," Ceferin said, highlighting how travel times across Europe can be as long as flights to the United States. "To go from Portugal to Azerbaijan for example is almost the same or the same as if you go to New York. For the fans it's no problem but we should see. It's a European competition so let's think about it."

UEFA could gauge the appetite for taking its major finals beyond Europe by first experimenting with the less-regarded Super Cup, which is played in August between the winners of the Champions League and Europa League.

UEFA has until now been awarding the honor of staging its showpiece finals without any tendering process, with stadium hosts decided in secret by the leadership.

"The bidding process should be very clear because if you get the Champions League finals or Europa League finals as a political favor then it's not OK," Ceferin said. "With a clear bidding procedure I will protect also the administration and myself because whoever tries to call us, to push us, to ask us for such a favor we will have a clear answer, 'Sorry, there are clear rules we cannot do it.'"

In his first major interview since succeeding Michel Platini as UEFA president last month, Ceferin displayed a willingness to innovate while not damaging the organization's lucrative competitions.

"The Champions League is the best sporting product in the world," Ceferin said at UEFA headquarters in Nyon on the banks of Lake Geneva.

And the former Slovenia federation president will not sacrifice the success of the competition by shifting kickoff times to pander to expanding soccer markets in Asia just to sweep up more television viewers or sponsors in the region. Games are always played in the evening in Europe, when much of Asia is asleep.

Only the final is played on a Saturday, but one option would be to also move the semifinals from their current midweek slot.

"There are some ideas about that because then China is not asleep because it's Saturday and they can watch," said Ceferin, whose presidential term runs until 2019. "But there are many problems concerning that with the calendar of the leagues. National leagues are too important.

"You have the Premier League which is very strong. It's an idea (semifinals at the weekend) that came out but it's too early to say anything concrete on it."

While mulling modifications to the Champions League, Ceferin is also involved in talks on whether to expand the World Cup. In his first FIFA Council meeting last week since becoming one of the governing body's vice presidents, Ceferin heard President Gianni Infantino propose boosting the World Cup from 32 to 48 teams.

"We didn't want to vote on it as it was too early," Ceferin said. "We simply didn't get any information about it. Nothing. Just shall we expand or not. We said we cannot say."

Ceferin is awaiting "proper analysis" on the merits of such a significant overhaul of the tournament. He is already certain Europe should gain a fair share of the additional 16 places rather than expansion being used to correct disparities between how the slots are currently split between the six confederations.

Thirteen teams qualify for the World Cup from the 55-nation UEFA region and Ceferin believes that "fans in North America and Asia prefer to watch our teams."

"If you put it to a vote (on the number of additional UEFA places) we might lose but we are the strongest confederation, nobody should forget that — strongest in quality and all other aspects," Ceferin said. "We have the best national teams. So I doubt they will outvote us."

Ceferin said UEFA "doesn't want to hurt the other confederations" but sees additional European teams as adding to the quality of the World Cup.

UEFA has already ceded ground on the 2026 World Cup, with Ceferin approving FIFA blocking Europe from bidding given the 2018 tournament is in Russia. North America is now the favorite to host the event for the first time since the 1994 World Cup in the United States.

"It would really be hard for me to say it would be good if it goes to North America or Africa," Ceferin said. "But given the infrastructure possibilities, probably Africa will have a hard time to place a serious bid."

Taleju Bhavani Temple opened for a day
27 minutes ago