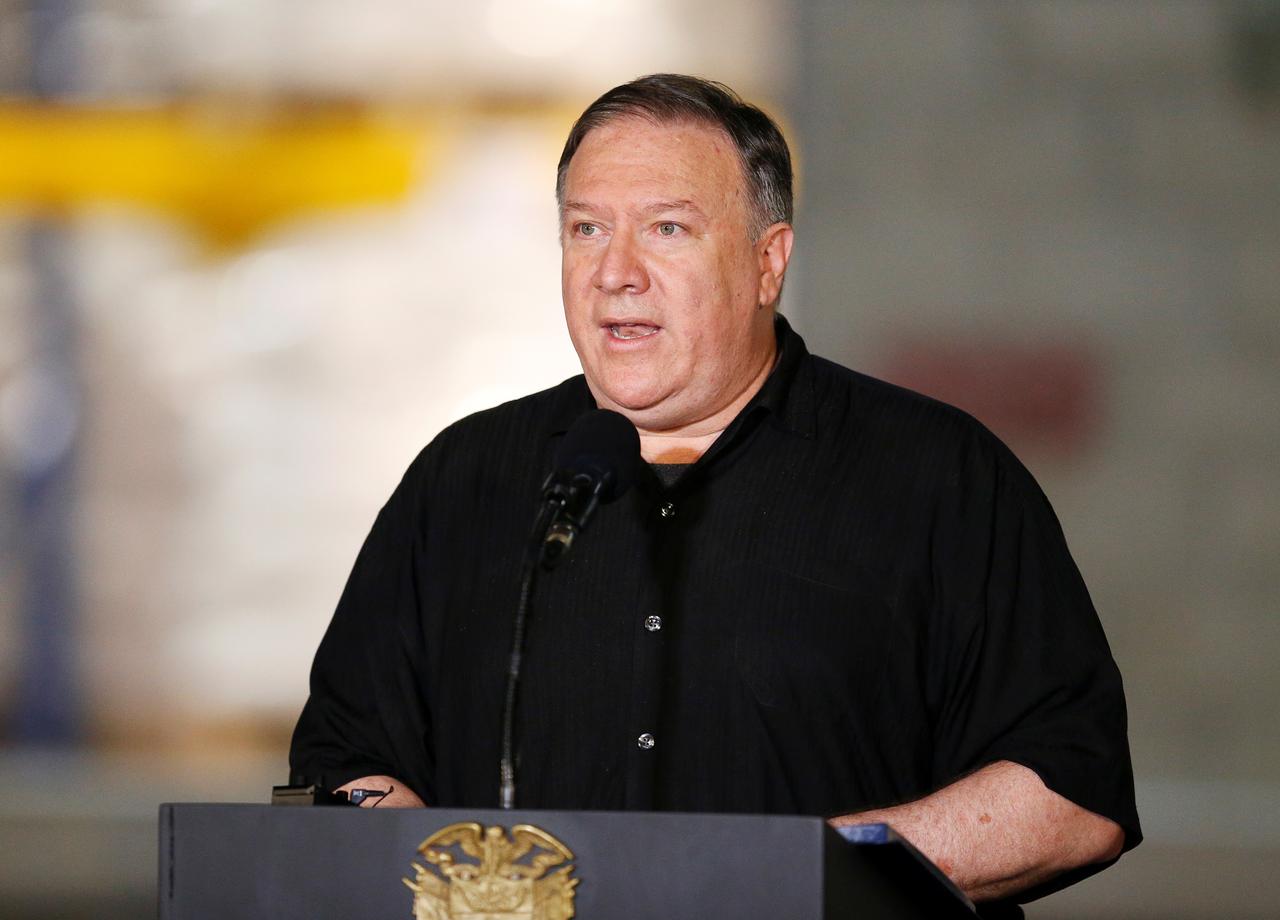 U.S. Secretary of State Mike Pompeo speaks during a news conference at a warehouse where international humanitarian aid for Venezuela is being stored, near La Unidad cross-border bridge between Colombia and Venezuela in Cucuta, Colombia April 14, 2019. REUTERS/Luisa Gonzalez

BOGOTA, April 15: The United States will use all economic and political tools at its disposal to hold Venezuelan President Nicolas Maduro accountable for his country’s crisis and will make clear to Cuba and Russia they will pay a price for supporting him, U.S. Secretary of State Mike Pompeo said on Sunday.

Pompeo made the comments in the Colombian border city of Cucuta, the final stop of a three-day trip to Chile, Paraguay and Peru, a clutch of fast-growing countries in a region where Washington’s concerns are focused on the Venezuelan crisis and China’s growing presence.

Maduro blames U.S. sanctions for the country’s economic problems and dismisses opposition leader Juan Guaido – who in January invoked the constitution to assume an interim presidency, arguing the socialist leader’s 2018 re-election was illegitimate - as a U.S. puppet.

“The United States will continue to utilize every economic and political means at our disposal to help the Venezuelan people,” Pompeo said after visiting with migrants at a Cucuta shelter and touring border bridges and a warehouse storing humanitarian aid.

“Using sanctions, visa revocations and other means, we pledge to hold the regime and those propping it up accountable for their corruption and their repression of democracy.”

Cucuta receives a significant portion of Venezuelan migrants arriving in Colombia, many of whom come with only what they can carry.

Although most Western nations, including the United States, have recognized Guaido as interim head of state, Russia, China and Cuba have stood by Maduro.

“You watch the political and diplomatic noose tighten around Maduro’s neck,” Pompeo told reporters accompanying him on the trip before taking off for the United States.

“Cubans must understand too that there will be cost associated with continued support of Nicolas Maduro,” he said. “And we’re going to have that same conversation with the Russians as well.”

Washington has imposed a raft of sanctions against Maduro’s government in an attempt to dislodge him from power, but he retains the backing of the country’s military. On Friday, the U.S. Treasury Department added four firms and nine ships to its blacklist, some of which it said carried oil to Cuba.

President Donald Trump’s national security adviser, John Bolton, said on Friday he would deliver a speech in Miami to Cuban exiles on Wednesday about actions the White House is taking on Venezuela, Cuba and Nicaragua, countries he has called a “troika of tyranny.”

While no final decision has been made on punitive measures Bolton is expected to announce, the Trump administration has been considering a range of options, including new targeted sanctions and further tightening of business restrictions on the Communist-ruled island that had been eased by former President Barack Obama, according to two people familiar with the matter.

Critics have warned that heavy sanctions on Venezuela could hurt ordinary Venezuelans.

Pompeo urged Maduro to leave his post and Venezuela so the country can return to normalcy.

China, whose booming economy over the past two decades has driven up demand for raw materials, is already the top trade partner for nations from tiny Uruguay to Brazil, Latin America’s largest economy and the world’s top soybean exporter.

MOSCOW, March 3: Russia is ready to take part in bilateral talks with the United States over the issue of... Read More...