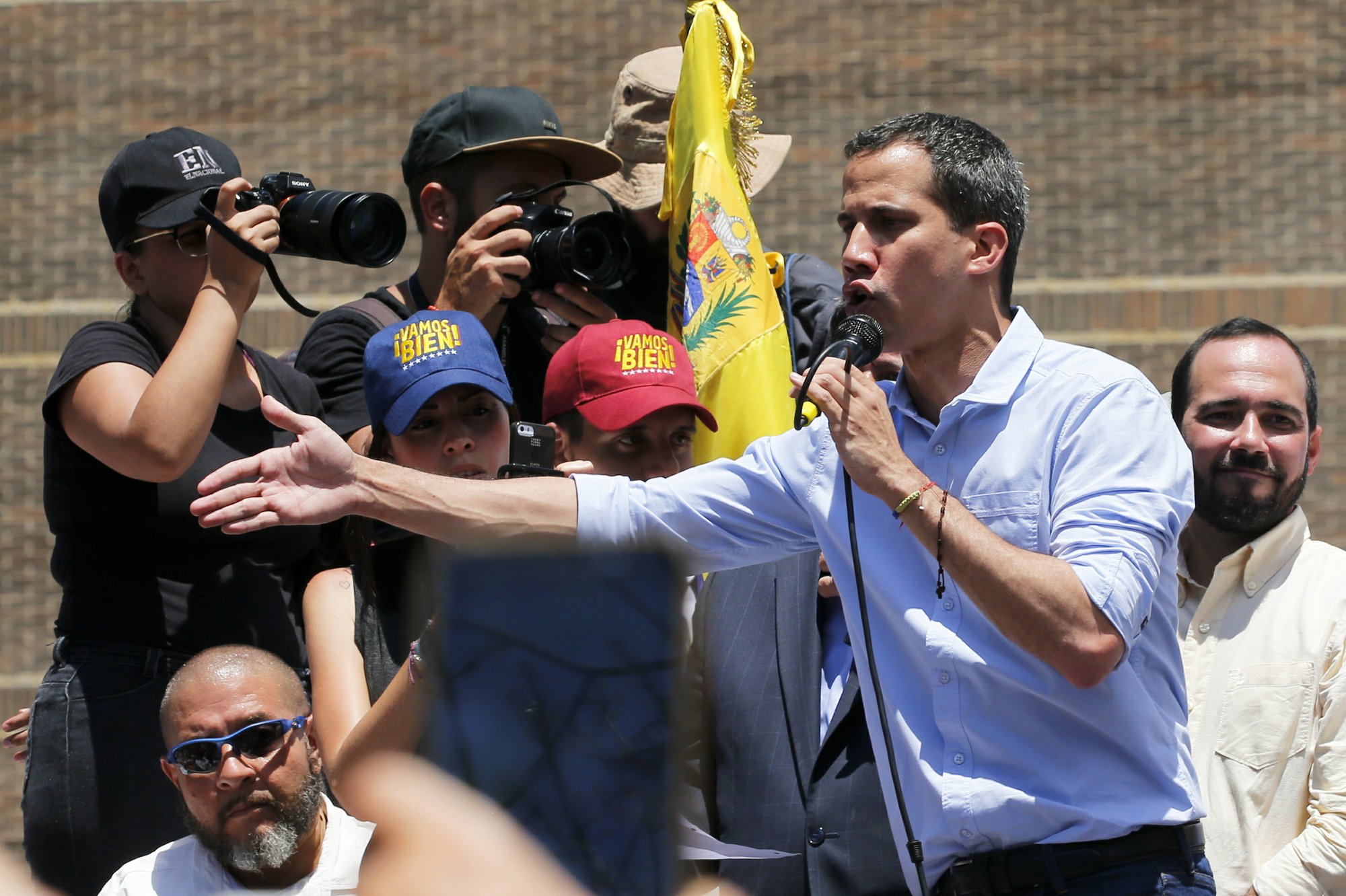 Opposition leader and self-proclaimed interim president Juan Guaido speaks to supporters during a rally to protest outages that left most of the country scrambling for days in the dark in Caracas, Venezuela, Saturday, April 6, 2019. Rival political factions are taking the streets across Venezuela in a mounting struggle for control of the crisis-wracked nation recently hit by crippling blackouts. (AP Photo/Fernando Llano)

CARACAS, April 7: Rival political factions took to the streets across Venezuela on Saturday in a mounting struggle for control of the crisis-wracked nation, where U.S.- backed opposition leader Juan Guaidó is attempting to oust socialist President Nicólas Maduro.

It was the first march Guaidó has led since Maduro loyalists stripped him of legal protections he’s granted as a congressman, opening a path to prosecute and possibly arrest him for allegedly violating the constitution.

The rallies also follow crippling power failures that left most of the country scrambling in the dark for days and without running water or phone service, which Maduro blamed on “terrorists” acts launched by political opponents.

Speaking before several thousand people who packed a broad Caracas avenue, Guaidó urged them to stay united and to keep up pressure until Maduro leaves power.

“Something is evident today,” Guaidó said. “Venezuela is not afraid and continues taking the streets until we achieve freedom.”

Guaidó tried to channel Venezuelans’ ire by calling crowds in the capital to march to the headquarters of the national power utility, Corpoelec. His supporters said the blackout is another failure of the socialist government.

“This regime has made big mistakes,” said Beatriz Cisneros, a 62, critical of Venezuela’s deteriorated petroleum industry, its broken educational system and hospitals that fail to provide basic care. “We’re fighting for Venezuela to have liberty.”

Many opposition supporters marched along a sunny main avenue carrying Venezuelan flags. A nun draped the national colors around her shoulders. Another protester carried a sign listing the lack of power, water and other basic services, along with the slogan: “Don’t get used to it.”

Across the country in Maracaibo, the hub of Venezuela’s once-thriving oil production, members of the National Guard fired tear gas at anti-government protesters, causing some injuries, local media reported. The area has been among those hardest hit by blackouts over the past two years.

Meanwhile, large crowds of Maduro backers, many dressed in bright red and gathered in the center of Caracas, waved flags and danced to blasting music as they marched to the presidential palace.

Maduro made a new call for dialogue toward reaching peace in Venezuela with help from the fellow Latin American countries, including Mexico and Uruguay. But he also against accused his opponents inside Venezuela of staging attacks and said they should stop.

Guaidó, 35, rose from relative obscurity in January when he was named head of Venezuela’s opposition-dominated National Assembly and said he was assuming presidential powers to force Maduro from power. He says Maduro is illegitimate due to allegedly fraudulent elections last year.

He has gained support from Washington and roughly 50 nations, but he has yet to budge Maduro, who maintains control over the government and military and is backed by foreign allies including China, Cuba and Russia.

Washington on Friday added to pressure on Maduro by imposing financial sanctions on two companies involved in shipping oil from Venezuela to Cuba, along with nearly three dozen ships. Maduro blames the recent blackouts on U.S. “cyber-attacks” as part of a coup attempt to topple his government.

Guaidó, meanwhile, has come under increasing pressure from Maduro’s government, which recently jailed his chief of staff and has taken legal actions that could lead to his own arrest, though the administration of President Donald Trump has warned of a strong response if the opposition leader is harmed.

Socialist party chief Diosdado Cabello told reporters on Saturday that the authorities acted in accordance with the laws in taking the legal action against Guaidó. Cabello also dismissed the new sanctions, saying the United States has to resort to such measures because “it has no more arguments.”

Amid several thousand Maduro supporters was Ana Margarita Urbina, 57, who wore a bright red shirt, the color of Venezuela’s socialist party, saying she marched to defend the country she said is under threat from the imperialist United States.

“We’re on a mission,” said Urbina. “We have a common cause. Our country is our mother.”