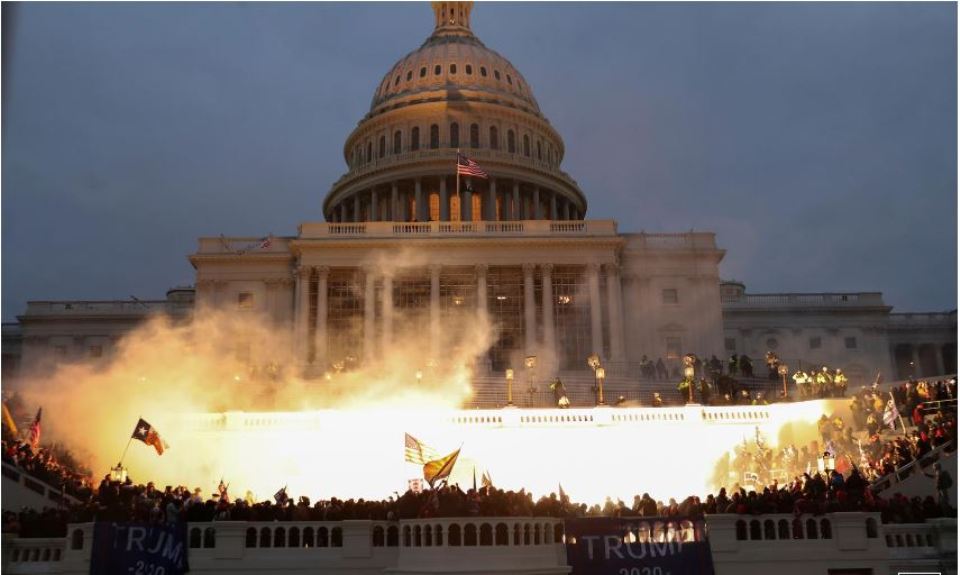 WASHINGTON, Jan 7: A Democratic congresswoman on Wednesday said she was drawing up articles of impeachment against President Donald Trump after mobs broke into the U.S. Capitol here following Trump's urgings to his supporters to fight to undo his election loss.

“We can’t allow him to remain in office, it’s a matter of preserving our Republic and we need to fulfill our oath,” U.S. Representative Ilhan Omar of Minnesota wrote on Twitter even though there are just two weeks left before President-elect Joe Biden takes office.

Alexandria Ocasio-Cortez, another Democratic lawmaker and member of the liberal “Squad” often targeted by the Republican Trump, echoed Omar’s call in a one-word tweet: “Impeach.”

Hundreds of protesters marched from a Trump rally near the White House to the Capitol and stormed the building. Video showed people breaking windows and pressing past barricades to get inside. Lawmakers from the Senate and the House of Representatives were evacuated as they met to confirm Biden’s victory in the Nov. 3 election.

“The fabric of our democracy and the principles of our republic are under attack by the President. Enough is enough. President Trump should resign or be removed from office by his Cabinet, or by the Congress,” Scott said in a tweet.

Representative David Cicilline, a Democrat, said Congress should “impeach and convict” Trump on Thursday. “This is outrageous and the president caused it.”

“Inciting a coup has to warrant impeachment,” NAACP Chairman Leon Russell wrote on Twitter. Russell and others said Trump’s cabinet should initiate the 25th Amendment of the U.S. Constitution, which transfers power to the vice president if the president becomes unable to do his job.

New York Times columnist Thomas Friedman said Senate Majority Leader Mitch McConnell should lead a delegation of Republican leaders to the White House “to tell Trump that he has to resign immediately - or they will join with Democrats and impeach him.”

Some Republican lawmakers had been attempting a last-ditch effort to challenge the election results when the Capitol was breached, encouraged by Trump and his unfounded claims of voter fraud.

Trump’s former White House Communications Director Anthony Scaramucci told Reuters via text: “Donald Trump and elected officials need to be impeached and removed from office. They have damaged our standing in the international community and are now threatening our way of life.”

A senior congressional source said Democrats could issue a quick one-count bill of impeachment against Trump for inciting or encouraging rioting and proceed with a vote, but the move would likely flounder in the Republican-controlled Senate.

The Senate acquitted Trump in February 2020 after an impeachment trial led by the Democratic-controlled House on charges of trying to pressure Ukraine to investigate Biden and his son Hunter Biden.