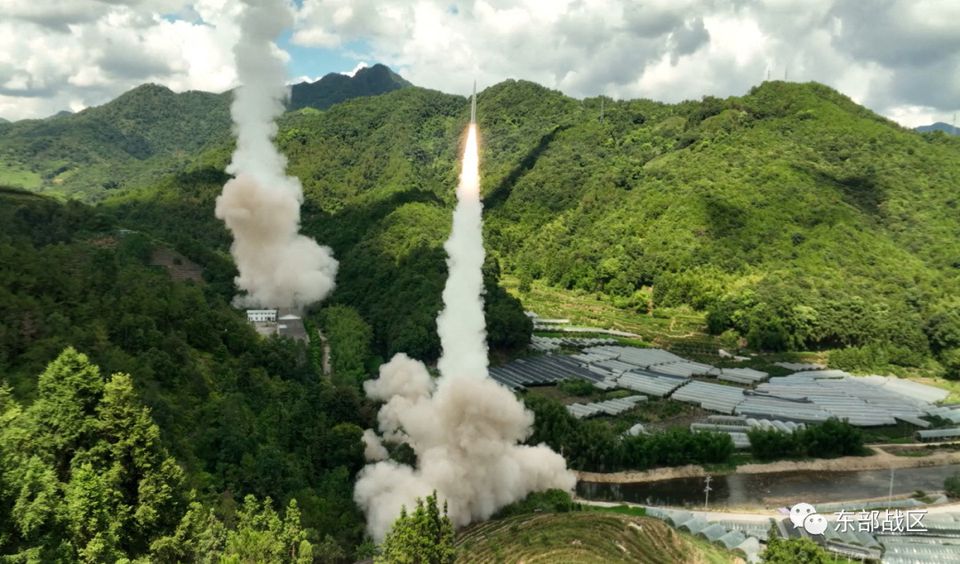 The Rocket Force under the Eastern Theatre Command of China's People's Liberation Army (PLA) conducts conventional missile tests into the waters off the eastern coast of Taiwan, from an undisclosed location in this handout released on August 4, 2022.

TAIPEI, Aug 5: China's firing of missiles during military drills around Taiwan was an unjustified escalation, U.S. Secretary of State Antony Blinken said, as Beijing said it would impose sanctions on House of Representatives Speaker Nancy Pelosi for visiting the island.

Diplomatic relations spiralled further downward on Friday, as China's foreign ministry followed up by saying it would cancel dialogues between U.S. and Chinese military leaders, and suspend bilateral talks on climate and maritime safety. read more

Blinken said Washington has made it repeatedly clear to Beijing it does not seek a crisis, as diplomatic ructions continued over Pelosi's visit this week to the self-governed island that Beijing regards as its sovereign territory.

"There is no justification for this extreme, disproportionate and escalatory military response," Blinken said, speaking at a news conference during the sidelines of the ASEAN Regional Forum in Cambodia. He added, "now, they've taken dangerous acts to a new level".

China launched its largest ever military drills in the seas and skies around Taiwan on Thursday, a day after Pelosi enraged Beijing by making a solidarity trip to the island, the highest-level U.S. visitor to Taiwan in 25 years. The live-fire drills are scheduled to continue until noon on Sunday.

On Friday, China's military conducted air and sea drills to the north, southwest and east of Taiwan "to test the troops' joint combat capabilities", the Eastern Theatre Command of the People's Liberation Army (PLA) said in a statement on its official Weibo account.

Blinken emphasised that the United States would not take actions to provoke a crisis, but it would continue to support regional allies and conduct standard air and maritime transit through the Taiwan Strait.

"We will fly, sail and operate wherever international law allows," he said.

China's foreign ministry announced on Friday that it would impose sanctions on Pelosi and her immediate family in response to her "vicious" and "provocative" actions. read more

"Despite China's serious concerns and firm opposition, Pelosi insisted on visiting Taiwan, seriously interfering in China's internal affairs, undermining China's sovereignty and territorial integrity, trampling on the one-China policy, and threatening the peace and stability of the Taiwan Strait," a foreign ministry spokesperson said in a statement. read more

The foreign ministry said it was also suspending co-operation on cross-border crime prevention and counter-narcotics, and cooperation on repatriation of illegal migrants.

Speaking in Japan, Pelosi said her trip to Asia was never about changing the regional status quo. read more

Earlier, Taiwan's defence ministry said the island's military had dispatched aircraft and ships and deployed land-based missile systems to monitor the situation there.

Japan's defence ministry, which is tracking the exercises, first reported that as many as four of the missiles flew over Taiwan's capital. It also said that five of nine missiles fired toward its territory landed in its exclusive economic zone (EEZ), also a first, prompting a diplomatic protest by Tokyo.

Later, Taiwan's defence ministry said the missiles were high in the atmosphere and constituted no threat. It gave no details of their flight paths, citing intelligence concerns.

Some Taipei residents, including Mayor Ko Wen-je, criticised the government for not putting out a missile alert, but one security expert said that could have been done to avoid stoking panic and playing into China's hands.

"It counteracted the effect of the Chinese Communist Party's psychological warfare," said Mei Fu-shin, a U.S.-based analyst. "The shock and fear were not as great as they could have been."

Asked to comment on the missiles, Taiwan Premier Su Tseng-chang did not directly respond, but referred to China as the "evil neighbour showing off her power at our door." read more

"In my view, the larger threat is that China is doing a rehearsal for a blockade, demonstrating it can block Taiwan's ports and airports, and prevent shipping," said Bonnie Glaser, a Washington-based Asia security specialist at the German Marshall Fund of the United States.

Responding to the Chinese drills, President Tsai Ing-wen said Taiwan would not provoke conflicts but would firmly defend its sovereignty and national security.

Taiwan has been self-ruled since 1949, when Mao Zedong's communists took power in Beijing after defeating Chiang Kai-shek’s Kuomintang (KMT) nationalists in a civil war, prompting the KMT-led government to retreat to the island.

Beijing has said its relations with Taiwan are an internal matter. It says it reserves the right to bring Taiwan under Chinese control, by force if necessary.

In Tokyo, Pelosi addressed the diplomatic furore caused by the congressional delegation's week-long trip to Asia, and most specifically to Taiwan.

"We have said from the start that our representation here is not about changing the status quo in Taiwan or the region," she told a news conference after meeting Japanese Prime Minister Fumio Kishida.

"I have informed speaker Pelosi that the fact China's ballistic missiles had landed near Japanese waters including EEZ threaten our national safety and security and that Japan had strongly condemned such actions," Kishida said.

China's foreign ministry said it had summoned the ambassador for Japan and a Canadian diplomat in Beijing on Thursday over an "erroneous" Group of Seven (G7) nations statement on Taiwan, and also made complaints to EU envoys.