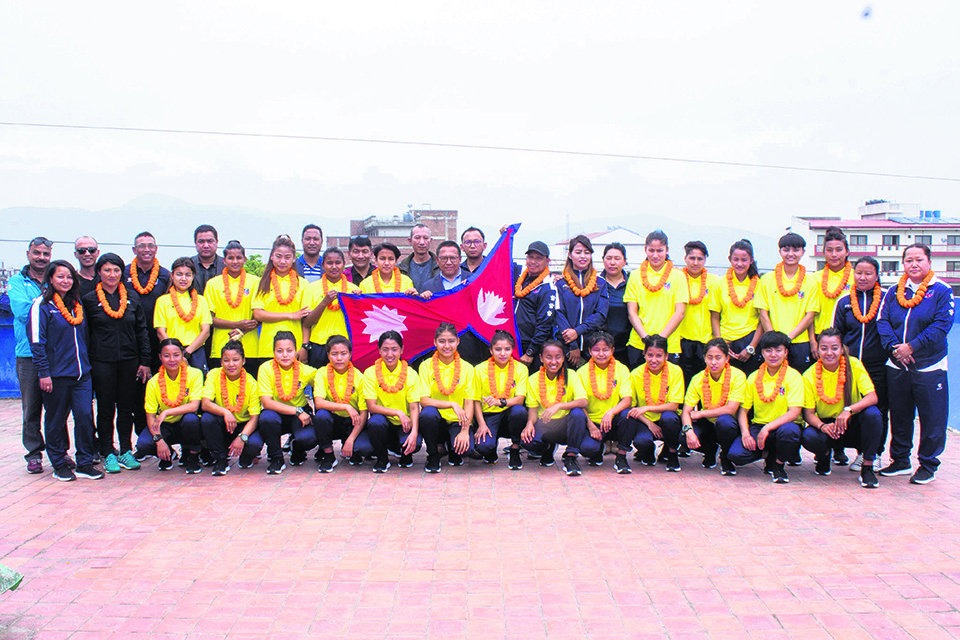 Members of Nepal U-19 women’s football team pose for a group photo with ANFA President Karma Tshering Sherpa at the ANFA Complex in Satdobato, Lalitpur on Wednesday, before leaving for China to play two friendlies against the Chengdu-based teams. The team will then travel to Myanmar to participate in the second round of the AFC U-19 Women's Championship Qualifiers 2019. Photo Courtesy: ANFA

KATHMANDU, April 18: Nepal’s 14-member U-16 cricket team has been announced to participate in Asian Cricket Council (ACC) U16 Eastern Region 2019 which is going to be held in Chiangmai, Thailand.  A selection committee headed head coach of senior national team Jagat Tamata selected finalized the squad on Wednesday.

The eight-team premier Asian age-level tournament will be held from April 20-28.
The squad includes players who participated in recently concluded U-16 National Cricket League played at Tribhuvan University Cricket Ground earlier this month.

Province 3 had won the league registering a 33-run win in the final against Province 5. The losing team’s skipper Bishal Bikram KC had been adjudged player of the series. Winning team’s Asish Bhattarai, and Province 5’s Ramesh Kurmi were selected as batsmen and bowler of the tournament respectively. Similarly, Arjun Kumal was awarded with emerging player. All of these players have made it to the squad set to tour Thailand.

Dhangadhi’s starlet Suwash Ayer, who played for Biratnagar Kings in Dhangadhi Premier League (DPL) under domestic quota, also made it to the squad among others.

National Sports Council (NSC) coach Basant Shahi has been appointed as the head coach of the team for the 10-day event. Sudeep Sharma will manage the team with Dinesh Bhatta as a physiotherapist completing a three-member support staff.

Seven provinces had participated in the selection tournament overseen by the Youth and Sports Ministry in coordination with NSC.

Defending champion Nepal will start its campaign to retain the trophy against Myanmar on April 20 at the Prem Tinsulanonda School Cricket Ground. The team will leave for Thailand on Thursday.