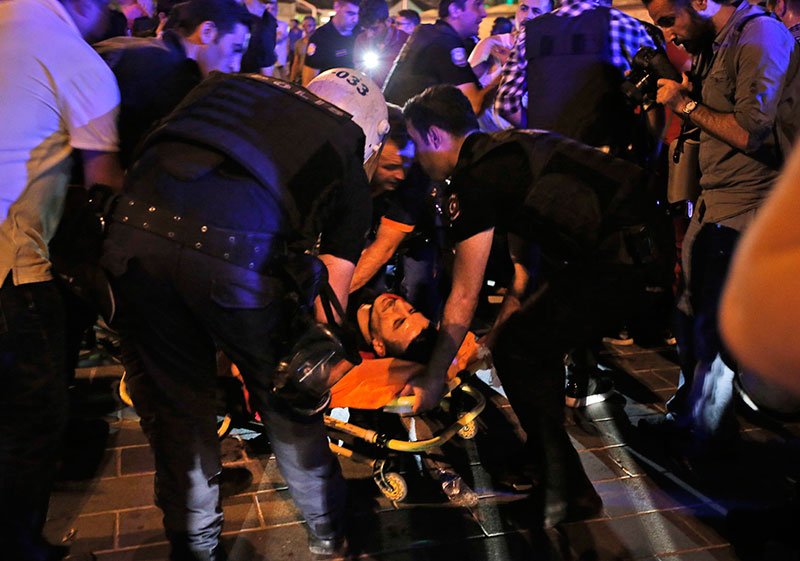 ANKARA, Turkey, July 16: Turkish President Recep Tayyip Erdogan told the nation Saturday that his government is in charge after a coup attempt brought a night of explosions, air battles and gunfire across the capital that left dozens dead. The state-run news agency said more than 750 soldiers have been detained across the country.

However, fighting continued throughout the morning, with the sounds of huge blasts echoing across the capital, Ankara, and Istanbul, including at least one bomb that hit the parliament complex. Government officials said the coup appeared to have failed as Turks took to the streets overnight to confront troops attempting to take over the country.

"There is no where they have they have proper control," Bozdag said. "God willing, they will be defeated in the remaining areas and those in the air will be brought down."

It was not clear who was in control of the military headquarters and Erdogan had not left the airport as dawn broke. CNN-Turk quoted Prime Minister Binali Yildirim as saying that commander of Turkey's 1st Army, Gen. Umit Dundar, has been appointed acting chief of military staff.

Erdogan said he had no information concerning Chief of Staff Gen. Hulusi Akar, who was reportedly taken hostage at the military headquarters by coup plotters. There also was no word on the whereabouts of other top commanders, including the commander of the land forces.

Earlier, Erdogan said the government was arresting coup supporters in the military and warned "they will pay a heavy price for their treason to Turkey," according to a transcript of his remarks provided by his office. "Those who stain the military's reputation must leave. The process has started today, and it will continue just as we fight other terrorist groups."

An official in the president's office says at least 60 people have been killed and more than 330 people have been arrested. The official spoke to The Associated Press on condition of anonymity because he wasn't authorized to speak to the media.

In images broadcast on CNN-Turk, dozens of soldiers walked among tanks with their hand held up, surrendering to government forces on Istanbul's Bosporus Bridge. Discarded gear was strewn on the ground. People, some holding flags, climbed onto the tanks.

Anadolu reported that 754 members of Turkey's armed forces have been detained across the country. At the Etimesgut armored units training command, in the outskirts of Ankara, some soldiers who took part in the attempted coup were arrested by fellow officers or soldiers and handed over to police, the agency reported.

Erdogan, who said his general secretary had been abducted by the coup plotters, flew into Ataturk airport early Saturday and was greeted by large crowds. Hours earlier, as the coup attempt got underway, his office declined to say where he was, and he was forced to give an interview over FaceTime to a television station.

Yildirim has called all legislators for an emergency meeting Saturday, Anadolu reported.

Turkey, a NATO member, is a key partner in U.S.-led efforts to defeat the Islamic State group, and has allowed American jets to use its Incirlik air base to fly missions against the extremists in nearby Syria and Iraq. A coup against the democratically elected government could make it difficult for the United States to continue to cooperate with Turkey.

The coup attempt began late Friday, with a statement from the military saying it had seized control "to reinstall the constitutional order, democracy, human rights and freedoms, to ensure that the rule of law once again reigns in the country, for law and order to be reinstated."

Fighter jets buzzed overhead, gunfire erupted outside military headquarters and vehicles blocked two major bridges in Istanbul. Soldiers backed by tanks blocked entry to Istanbul's airport for a couple of hours before being overtaken by pro-government crowds carrying Turkish flags, according to footage broadcast by the Dogan news agency.

But the military did not appear unified, with top commanders taking to television to condemn the action and order troops back to their barracks.

"Those who are attempting a coup will not succeed. Our people should know that we will overcome this," Gen. Zekai Aksakalli, the commander of the military special forces, told the private NTV television by telephone.

Fighter jets under the control of loyalist forces were flying over the capital to strike at helicopters flown by coup supporters, the Anadolu news agency said. NTV reported that one helicopter was shot down. Gunfire and explosions rang out.

Erdogan called on Turks to take to the streets across the country, and many did, marching through the streets of Izmir and Istanbul, waving Turkish flags and gathering in the main square in Ankara. The Dogan news agency reported that soldiers fired on a group of people trying to cross the Bosporus bridge to protest the attempted coup, and that some people have been hurt. TV footage showed people running for cover amid gunfire.

Troops also fired in the air to disperse a growing crowd of government supporters at the Taksim monument in Istanbul as military helicopters flew overhead. A nearby mosque made an anti-coup announcement over its loudspeakers. Several blasts and the screech of fighter jets were heard in central Istanbul as dawn approached.

At least 42 people were killed in the capital, NTV quoted the prosecutor's office as saying. Parliament Speaker Ismail Kahraman said a bomb hit one corner of a public relations building inside the parliament complex, injuring some police officers. Turkish media broadcast images of plaster and debris strewn on the ground there.

Special forces police appear to be deployed in the grounds of the parliament complex, just across the street from the military headquarters.

In Istanbul, an official at Haydarpasa Numune Hospital said at least 150 people were admitted with wounds but would not comment on whether there were fatalities. NTV reported six dead had been brought to that hospital. An official at Istanbul's Sisli Hamidiye Etfal Training and Research Hospital said they had also received dead and wounded. Both officials spoke on condition of anonymity because they were not allowed to comment publicly.

In his TV address, Erdogan blamed the attack on supporters of Fethullah Gulen.

Erdogan has long accused the cleric and his supporters of attempting to overthrow the government. The cleric lives in exile in Pennsylvania and promotes a philosophy that blends a mystical form of Islam with staunch advocacy of democracy, education, science and interfaith dialogue.

By Saturday morning, a top Turkish official said the coup attempt appeared to have been repelled. The senior official told The Associated Press that all government officials were in charge of their offices. The official requested anonymity because of the sensitivity of the issue.

Election code is not creating problems for government: PM Deuba

BIRATNAGAR, September 12: Prime Minister Sher Bahadur Deuba said the government is not facing any difficulties due to the election... Read More...