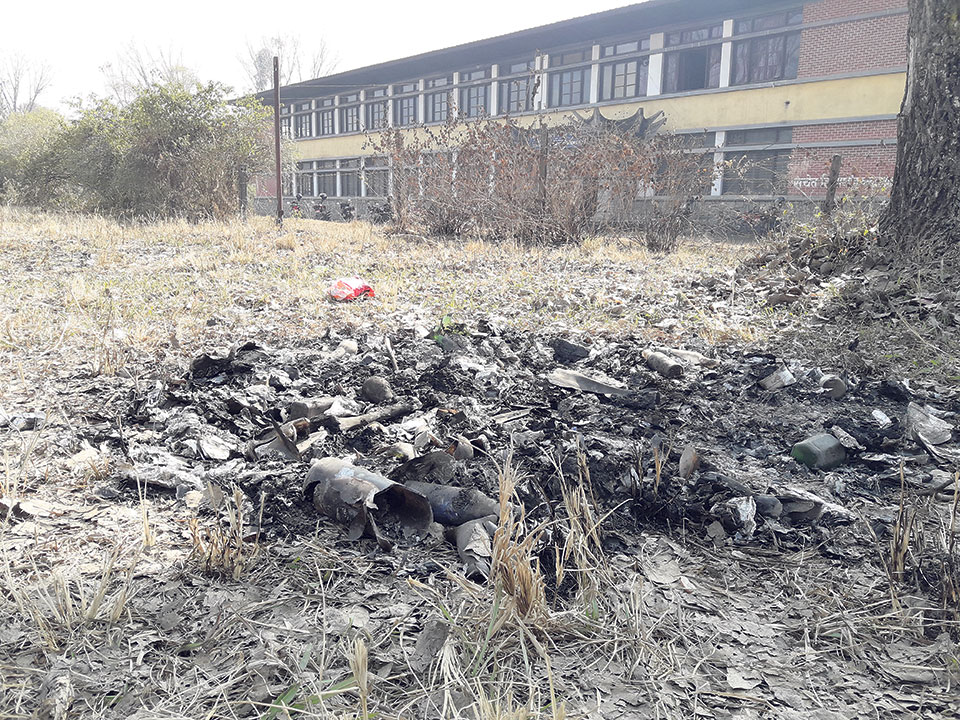 Burnt plastic waste on the premises of Tribhuvan University.

KATHMANDU, Jan 15: Burning waste materials, which is restricted by national and international laws, is a normal phenomena in Tribhuvan University (TU), the oldest and biggest university of the country. Plastics are openly burned on the premises of TU in Kirtipur.

However, TU officials and authorities have done nothing to stop burning plastics, which has dangerous impact on human health and environment. It has been found that the TU staffers and senior officials themselves are involved in burning plastic materials.

“When the metropolis stopped picking waste materials from the university premises, we started burning them,” said TU's Principal Krishna Prasad Acharya, who is responsible to manage the infrastructures, sanitation, and environment of the university. “If we don't burn these wastes, it will litter the whole university ground in the absence of garbage disposal facility,” Acharya said.

“On one hand, the dustbins kept inside the university get stolen in every two-three days. On the other hand, the municipal office never collects waste from the university,” he said.
Kirtipur's Mayor Ramesh Maharjan said that the municipality is not directly involved in collecting wastes as it has delegated the responsibility to the private sector. “The private sector collects and manages waste matter in the city,” he added. “However, we will discuss waste management in TU in the upcoming municipal assembly which is being held within two weeks,” he added.

The vicinity of TU is littered with plastic bags and water bottles, packets of noodles, biscuits, tobacco, chocolates and chewing gums. It has been found that the number of tobacco packets is more than any other plastic materials that are littered around TU.
“According to our analysis, boys are littering the area more than girls,” said Nirashraya Khatiwada and Pratiksha Pant, students of CDE.

“Everyone should behave responsibly to keep the university neat and clean. This does not look like a university now,” one of the students.

Out of 39 central departments of TU, 32 central departments are located at the main complex of TU in Kirtipur where about 4,200 students pursue their Master's Degree in different courses. The university, which is spread across 4,200 ropanis of land, does not have proper fence or compound walls. Anyone who lives around can walk through the university premises without any problem.

People even enter the university premises for dating, having drugs and involving in sexual activities inside the vast area of the university.
Prof Dr Tirtha Raj Khaniya, vice-chancellor of TU, said that the principal of TU and departmental heads are responsible for managing these things.

“We constructed the main gate of TU recently but locals did not allow us to regulate mass entry into the TU premises. They threatened to demolish the gate,” VC Khaniya said.
“We had erected compound walls about two decades ago but the locals broke it down,” he added. “We have now begun the process for constructing compound walls of the university again.”

TU continues to burn plastic on its premises