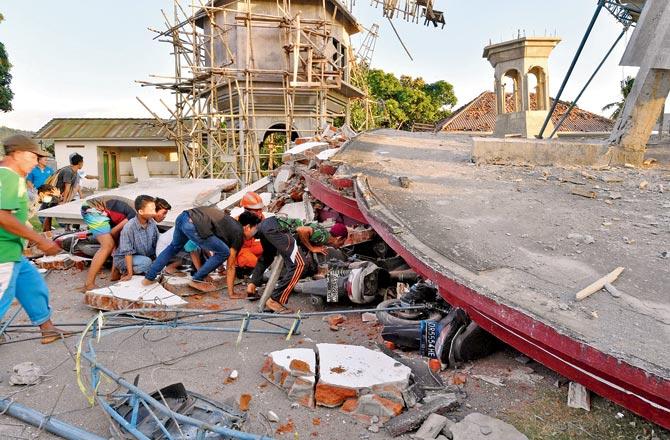 WANI, Oct 3: He survived the earthquake and tsunami, yet days have passed since. Taking refuge on the shaded porch of an empty house, Darjan didn't feel relief as he looked out at the mix of broken concrete and shattered lumber that littered the narrow street cutting through his village.

"No help has come at all," he seethed.

Residents of smaller villages suffering from the lack of food, medical attention, fuel and shelter are angry that aid hasn't arrived in the days since Friday's earthquake and tsunami. Indonesia's government has struggled to help those who need it after such a large-scale disaster, and relief efforts have focused on the city of Palu, the provincial capital. For days authorities acknowledged they had little idea about the plight of those in three outlying regencies, home to some 1.2 million people.

In the fishing village of Wani, 33-year-old Darjan, who uses one name, said he and his family were safe, but they had lost their home.

"This banana is all we have left," he said Tuesday, nodding at the half-eaten piece of fruit in his hand.

As information from Donggala, Sigi and Parigi Muntong regencies has started to trickle in, residents in their cutoff townships and villages — many closer to the quake's epicenter — are pleading for help and saying they are being overlooked by rescuers focusing their efforts on the city.

Yet even in Palu there was desperation, with signs propped along roads reading "We Need Food" and "We Need Support" and children begging in the streets.

Overwhelmed by the crisis, Jokowi has authorized for the country to accept international help. The government said it has nearly 6,400 rescue personnel taking part in the operation and said it still needs time to take care of all of the problems.

Donggala is a sprawling regency that sits on both sides of a narrow bay, where the shores were devastated by tsunami waves as high as 6 meters (almost 20 feet). Officials have said that assessing the damage there has been made difficult by downed communication lines and impassable roads.

In Wani, villagers said the seawater receded after the earthquake and was quickly followed by an "extraordinary wave" that hit the shore. Buildings along the coast appeared to have either disappeared, with their tin roofs flattened to the ground, or been obliterated into ruins.

The waves washed fishing boats ashore and a large passenger ship sits on dry land pinned against a building. A green-roofed mosque stands intact, surrounded by wreckage from destroyed homes.

Darjan estimated at least 30 people in Wani have died. The official toll of at least 1,234 dead is acknowledged to be low and not yet include those from the outlying, harder-to-reach localities.

He said there was an urgent need for food and medicine in Wani, to which another resident, Muhamad Tofik agreed, saying many children were hungry and sick because there was no milk or medicine.

"We feel like we are stepchildren here because all the help is going to Palu," the 38-year-old said.

PALU, Sept 30: More than 400 people were confirmed killed, many swept away as tsunami waves triggered by a massive... Read More...