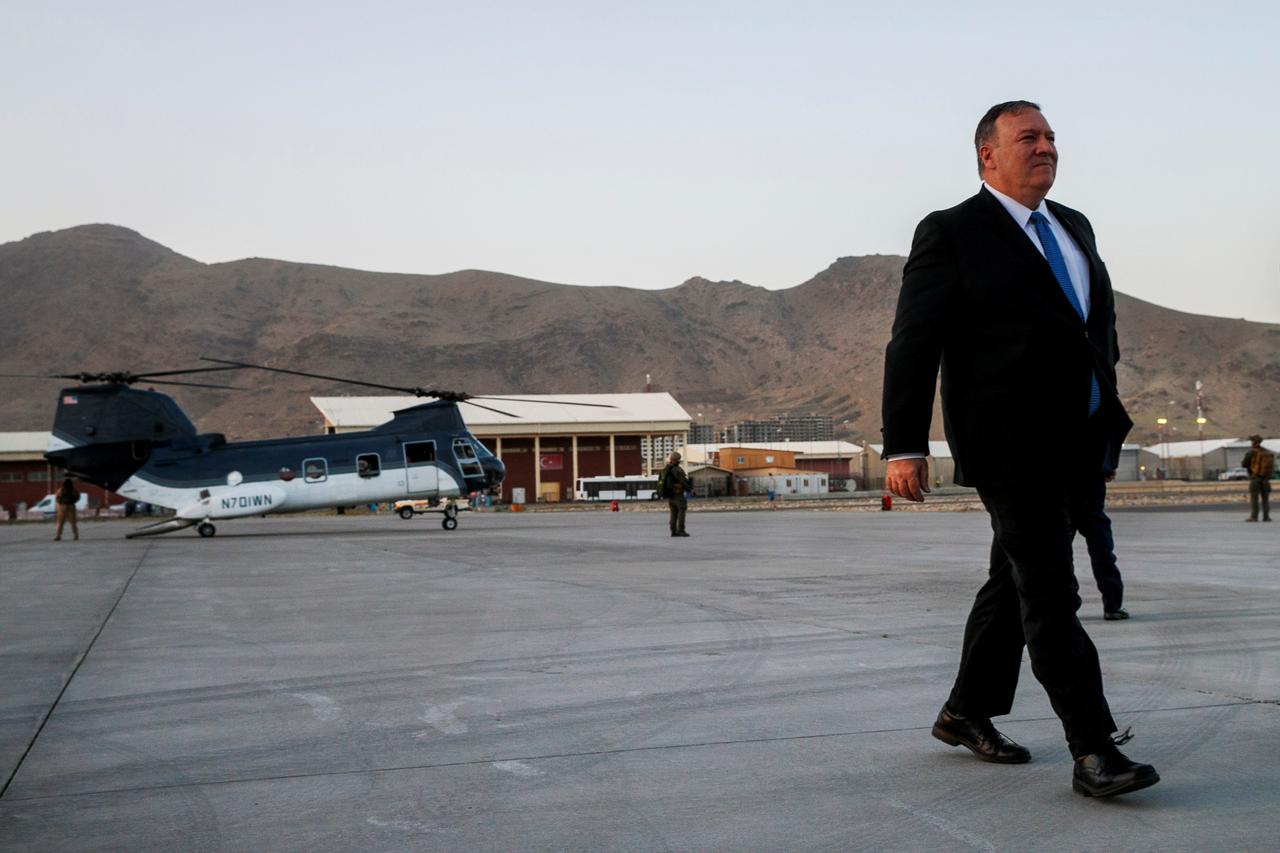 FILE PHOTO: Secretary of State Mike Pompeo walks from a helicopter to return to his plane at the end of an unannounced visit to Kabul, Afghanistan, June 25, 2019. Jacquelyn Martin/Pool via REUTERS

WASHINGTON, July 30: U.S. President Donald Trump wants combat forces reduced in Afghanistan by the next U.S. presidential election, Secretary of State Mike Pompeo said on Monday, in comments that underlined the growing pressure from Washington to cut troop numbers there.

Trump’s South Asia strategy, unveiled in August 2017, called for an open-ended deployment of U.S. forces with the goal of compelling the Taliban to negotiate peace with the Kabul government to end nearly 18 years of war.

However, Pompeo’s comments underscored a shift that has apparently taken place since talks with the Taliban opened last year.

“That’s my directive from the president of the United States,” Pompeo told The Economic Club of Washington D.C. when asked whether he expects the United States to reduce troops in Afghanistan before the next election in November 2020.

“He’s been unambiguous: end the endless wars, draw down, reduce. It won’t just be us,” he said, referring to Trump’s directive. “We hope that overall the need for combat forces in the region is reduced.”

The disclosure of a timeline will add to speculation that Trump is prepared to strike any deal with the Taliban that will allow for at least partial U.S. withdrawal before American voters go to the polls, irrespective of the concerns of the U.S.-backed government in Kabul.

“Now suddenly adhering to the date suited to Trump’s election date has become more important than the meticulous task of bringing peace to Afghanistan,” said a senior Afghan official who is also a close aide to President Ashraf Ghani.

“The American haste to pull out foreign troops has only provided more leverage to the Taliban. Afghan forces will be soon abandoned to fight the war alone,” said the official, who declined to be identified.

Pompeo’s comments come at a delicate moment, as Afghanistan prepares for a presidential election of its own in September and the United States prepares to engage in another round talks with the insurgents.

Disclosing Trump’s goal of withdrawing forces could weaken the U.S. negotiating position if the Taliban believe Trump wants to get out, no matter what.

On Friday, the State Department said Pompeo and Ghani agreed in a telephone call to “accelerate efforts” to end the war, and that the United States remained committed to a “conditions-based” drawdown of troops.

Pompeo said he was optimistic about the negotiations with the Taliban to end the nearly 18-year-old war.

Washington wants a deal under which foreign forces would pull out in return for security guarantees by the Taliban, in particular a pledge that the country will not become a safe haven for terror groups.

“We want them to take their country back, and we want to reduce what is, for us, tens of billions of dollars a year in expenditures,” Pompeo said.

More than 20,000 U.S. and other NATO coalition troops are in Afghanistan as part of a mission to train, assist and advise Afghan forces, which remain heavily dependent on U.S. air support, and to carry out counterterrorism operations.

While U.S. diplomats say the peace process must be “Afghan owned and led”, senior Afghan officials and Western diplomats said the timetable being imposed by the White House to get U.S. troops out risked overshadowing the wider aim of peace among Afghans.

“Ensuring that the Afghan government and the Taliban hold direct talks has clearly slipped below the radar, the main aim is to cut a deal with the Taliban before Afghan elections in September,” said one European diplomat in Kabul.

While the Taliban have held meetings with Afghan politicians and civil society representatives, they have refused to deal with the Afghan government, which they deride as a U.S. “puppet”.

Some U.S. allies fear that once a timetable for a U.S. pullout is announced, the Afghan government will have little leverage over the militants in their talks about how to run the country.

But those so-called intra-Afghan talks will only come after the United States has struck and announced its troop withdrawal plan with the Taliban.

“The bargaining power to protect democracy and basic freedom will be surrendered once the pullout is announced,” the second diplomat said.

Officials at the NATO’s Resolute Support in Kabul said they were working on a drawdown plan while maintaining support for Afghan forces in their fight against the militants.

“There is a massive churning, some bases could be vacated and some could be merged together but security and counter-terrorism operations are not being compromised,” said a senior NATO officer.