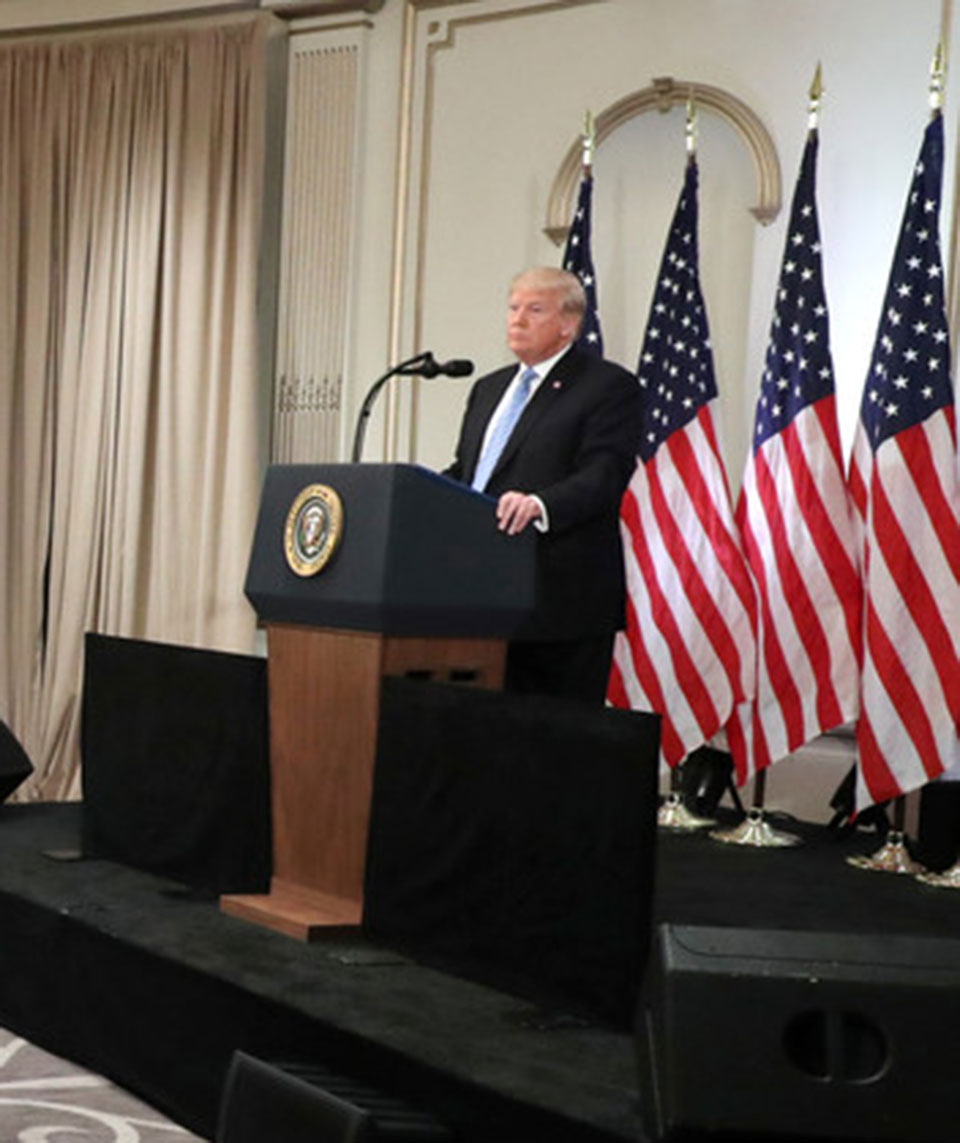 NEW YORK, Sept 27: US President Donald Trump's chat with the media after his appearance at the UN was a roller coaster of bizarre claims, boasts and jabs at the media. Even one of the Founding Fathers got involved. Here are the best takeaways.

UN audience was laughing 'with' Trump, not 'at' him

The press conference dipped into the realm of the surreal a few times, but this was perhaps the most eyebrow-raising moment. When asked about his Tuesday bragging bout at the UN General Assembly and some of the world leaders' reaction, Trump has this to say.

“They weren’t laughing at me, they were laughing with me. It was fun.”

That was when he said that he had accomplished more in two years than any administration ever had. The giggles it provoked were a sign that "the United States is respected again," according to Trump.

Democrats would vote against George Washington

As establishment journalists swiped at Trump again and again for an answer about Brett Kavanaugh's nomination, he turned to the iconic figure of George Washington. As Trump put it, the Founding Father "may have had some accusations made" against him, as well, suggesting that modern-day Democrats would be his fans at all.

"George Washington would be voted against 100 percent by Schumer and the con artists."

CNN's Jim Acosta did his best to turn the briefing into a women's rights discussion, by asking why Trump wasn't taking questions from female reporters (Acosta was the fourth man in a row Trump called up). "What does he mean by that?"Trump asked.

"Wouldn't make any difference to me."

What Acosta meant, of course, was to prod Trump about the nomination of Brett Kavanaugh and the sexual assault allegations against him. This was followed by questions on why Trump was willing to give the accused the benefit of the doubt instead of believing the accusers' words without reservation. Trump said several times he would be listening to Kavanaugh accuser Christine Blasey Ford when she testifies, and even admitted that if he thought Kavanaugh was culpable, he could withdraw his nomination.

Women 'were paid' to accuse Trump of sexual misconduct

As a natural segue from the allegations against Kavanaugh, Trump was asked if his own experience with similar allegations was coloring his opinion. Trump answered at length about how he believes those allegations came to be.

"I was accused by four or five women who got paid a lot of money to make up stories about me."

One of those, according to Trump, had her mortgage paid off to the tune of $52,000. Another, he said, was offered $750,000, but she "reported it instead of taking the money." He didn't say who he believed was throwing cash around to smear him. He did say why, though: all because he is "a very famous person, unfortunately."

The US media has been rife with speculation that Deputy Attorney General Rod Rosenstein will be either shown the door by Trump or resign in the wake of a New York Times report that he suggested recording Trump in the White House to expose him for being unfit to run the country.

“We’ve had a good talk. He said he’d never said it, he said he doesn’t believe it, he said it with a lot of respect for me, and he was very nice and we’ll see,” Trump said.

"My preference would be to keep him and to let him finish up."

Trump did say he would call Rosenstein to reschedule the meeting due to the other big story of the week: Thursday's Senate Judiciary Committee hearing with Supreme Court nominee Brett Kavanaugh.

No rush on North Korea

Stepping away from the guerrilla warfare of American internal politics, Trump was asked about the timeline for the North Korean denuclearization. He said there was no rush, since the nuclear testing has stopped.

He then gushed with praise for North Korean leader Kim Jong-un, calling his recent letter “a beautiful peace of art,” and saying he "likes me, I like him, we get along.” Trump wouldn't be Trump if he forgot to praise himself, too: were it not for him, the US would be at war with North Korea now, said the man who less than a year ago was boasting about how his nuclear button was bigger than Kim's.

There was room for the bizarre in the international part of the briefing, of course. When it came to Syria (though the question was actually about the US relations with the Kurds), Trump claimed responsibility for averting an offensive on the militant-held Idlib province.

“I think millions of people would’ve been killed,” Trump said, had he not picked up the "failing New York Times," read about the upcoming battle and ordered Secretary of State Mike Pompeo and National Security Advisor John Bolton to stop it.

“Nobody is going to give me credit, but that’s OK.”

He most generously gave credit to Russia and Syria “for not doing it.” It was them and Turkey, after all, that actually hammered out a deal on September 17 that created a buffer zone between government troops and rebels.

Trump hinted that Canada might be left out from a new trade deal, because if the negotiations with Canada do not work out, the US is “going to make a much better deal” while putting "billions of dollars into our treasury" from import taxes.

“What we are probably going to do is call it USMC… But it will probably or possibly be just USM, United States and Mexico."

He said he had declined a one-on-one meeting with Canadian Prime Minister Justin Trudeau during the UN General Assembly, because of how poorly Canada treats American farmers with its dairy tariffs. Trudeau's spokesperson said they never requested a meeting.

Trump says he is making Iran suffer like never before

Stressing that, unlike his predecessor Barack Obama, he favored the people of Iran against their government, Trump then boasted that he has brought them unprecedented misery.

The most important thing is that Iranians are having it much worse now than they were ”during the green period with President Obama.” It doesn't matter that other nations are acknowledging the success of the 2015 nuclear deal and trying to save it, Trump said, it was still the "worst deal ever."

“I’m happy if they’re happy. I’m a facilitator. I want to see if I can get a deal done so that people don’t get killed anymore.”

This coming from a US President who has been taking Israel's side and ignoring Palestine's at every turn. One of the moves that caused the most outrage was his moving the US embassy from Tel Aviv to Jerusalem, which derailed talks and caused Arab protests worldwide.

Trump 'has evidence' of China's meddling

Trump doubled down on his claims that China had been interfering with the US midterm elections, insisting that the accusations “didn’t come out of nowhere."

“We have evidence. It will come out."

As an example, Trump cited an advertisement the Chinese government had placed in Iowa’s largest newspaper, which called the soybean farmers “the fruit of a president’s folly” and outlined the adverse impact of the Trump administration’s protectionist trade policy on farmers. Xi Jinping is still a good friend, though, Trump said. Or "maybe he’s not anymore."

America is the best, Iran is the worst, globalism is bad: 5 things we learned from Trump’s UN speech

WASHINGTON, Nov 6: After a divisive campaign marked by fierce clashes over race, immigration and other cultural issues, Americans will... Read More...