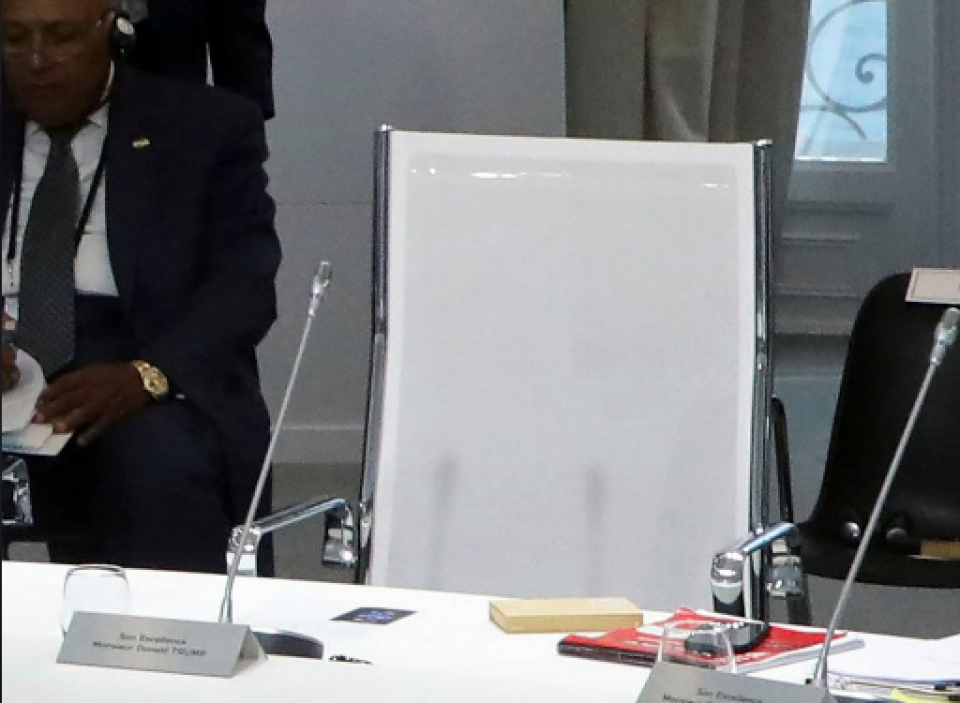 The empty chair of U.S. President Donald Trump is seen during a working session focused on climate change during the G7 Summit in Biarritz, France, August 26, 2019. Ludovic Marin/Pool via REUTERS

BIARRITZ, FRANCE, Aug 27: U.S. President Donald Trump, responding to a question about climate change after skipping a G7 session on the issue, said on Monday that American wealth is based on energy and he will not jeopardize that for dreams and windmills.

Trump, who in 2017 pulled the United States out of the landmark 2015 Paris climate accord involving nearly 200 countries and has described global warming as a “hoax,” also sought to portray himself as an environmentalist at a news conference at the close of the Group of Seven summit in France.

“I feel that the United States has tremendous wealth. The wealth is under its feet. I’ve made that wealth come alive. ... We are now the No. 1 energy producer in the world, and soon it will be by far,” Trump told reporters when asked about his views on climate change.

The Republican president skipped a session on climate change and biodiversity at the summit, instead holding bilateral meetings with German Chancellor Angela Merkel and Indian Prime Minister Narendra Modi.

The G7 leaders discussed the rainforest fires in Brazil and agreed to draw up an initiative for the Amazon to be launched at the U.N. General Assembly in New York next month.

“He wasn’t in the room, but his team was,” Macron said. “You shouldn’t read anything into the American president’s absence. ... The U.S. are with us on biodiversity and on the Amazon initiative.”

Trump called himself an environmentalist, noting that he had filled out so many environmental impact statements as part of his work as a real estate developer.

Institutions, trust, and soft power are more likely to erode if Trump is in office for eight years rather than... Read More...

BIARRITZ, Aug 25: U.S. President Donald Trump on Sunday said he was getting along well with his Western allies at... Read More...