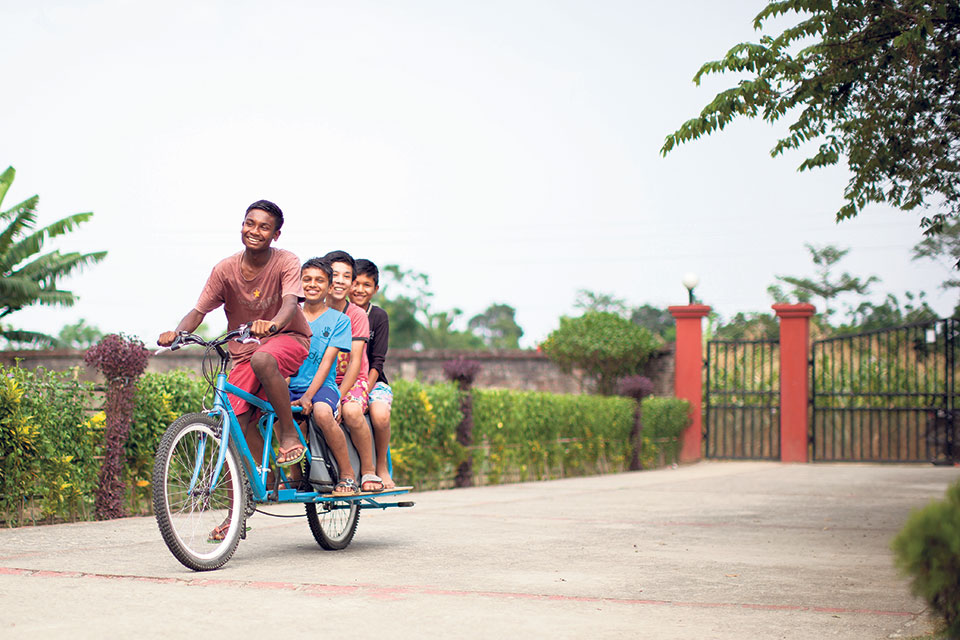 For most tourists and expats, Nepal appears to be a beautiful Shangri-La with delicious food, friendly people, heavenly places, and adventurous journeys. But according to Caleb Spear, founder and CEO of Portal Bikes and a citizen of the United States, it is only after living here that one understands the magnitude of challenges people face each day.

Spear, however, is determined in turning these challenges into strengths. Hence, he works tirelessly to create opportunities out of these never ending obstacles.

Portal Bikes is a company that works to make innovative and adaptable bicycles. Their simple inventions aim at powering business and transforming lives. They believe that creating small opportunities and empowering the underprivileged can help them get out of the vicious cycle of poverty.

“Creating opportunities does not require huge funds. It can be initiated with something as small as a cycle. And that is what we are working on,” says Spear.

The beginning of their journey
A close friend of Spear’s used to live in Nepal and he loved serving people. Spear and his wife wanted to join him in his journey to empower people in the Himalayas. Unfortunately, they lost him in an accident. So Spear and his wife decided to come to Nepal and pick up where his friend left off.

When they arrived in Nepal in 2013 they noticed that in their neighborhood women were shelling dry corns with their thumbs. They sat with them to help and soon realized that it was a difficult job. Their fingers had become red and sore in about half an hour.

That is when they started to explore simple inventions that could make a huge difference in peoples’ lives in Nepal. One of such inventions was the hand cranked corn shellers that were used in the USA many years back. Spear then decided to incorporate these corn shellers in a bicycle. Apart from being a great and simple source of mobility, the energy generated from the bikes could also be converted to operate the shelling machine.

Spear also invented an elongated bicycle for his family and children. On that, they would get around the town without having to worry about the fuel expenses. “Our elongated bike that could fit an entire family often turned heads around and attracted a lot of attention. Many even asked us if they could buy it from somewhere. That is when we began thinking about manufacturing these cycles in a larger scale,” says Spear.

Unique utilities
Portal Bikes currently sell three kinds of bikes that can be modified and adjusted according to the demands of their customers. Portal PTO (Power Take Off) transforms a bicycle into a peddle powered machine. But it does not compromise on the bicycle’s ability to move forward like a normal bicycle.

The PTO can be very useful for pumping water, shelling corn and makes day to day work easier for the marginalized section of our society. “If a woman takes two days to shell a certain amount of corn, the same thing can be done in two hours with this simple machine. She can then do some other work to generate more income in a given time. You can shell your own corn, grind your own wheat, or become an entrepreneur and start a business out of portal bikes,” says Spear.

The second kind of bikes created by this organization is the long-tail bikes. “We call these bikes agents of transformation as they will enable you to carry the heaviest of loads,” says Spear. These bikes can transport a family, help people in delivering goods and is great for delivering gas cylinders or water jars around the city.

Finally, they have mid-tail bikes that are slightly shorter than long-tail bikes and have a great carrying capacity. These bikes can easily handle 140 kilograms cargo and fits everyone’s need. This bike ensures that your entire family can travel in a single bicycle in a comfortable manner. The kickstand is sturdy and ensures that the bike can withstand heavy load even after it has reached its destination.

Clean and green city
The air quality in Nepal is degrading day by day. Environmental index put up by Yale and Columbia University shows that Nepal falls under the category of countries having the worst air quality in the world. Every year thousands of people lose their lives due to air pollution in Nepal.

“Air pollution is a crisis that we have to deal with everyday, especially in Kathmandu,” says Spear. “And the marginalized section of our society are most affected by it,” he adds.

Hence, Portal Bikes also aims to make a difference for people living at the margins of the society. They want to help people who are immediately impacted by pollution and are vulnerable to environmental change. According to Spear, when the marginalized section suffers from pollution related diseases it affects their earning capacity creating a vicious cycle of poverty.

“We have bikes that are emission free and easy to use. Kathmandu is a small city and everyone can ride a bicycle and get anywhere. We believe that a small step towards change can make a great difference to this challenging situation,” says Spear requesting people to ride a portal bicycle instead of gas guzzling vehicles whenever possible to reduce harmful emissions.

Researching for possibilities
“When we came to Nepal, we realized that a bicycle can change people’s lives and offer commerce and opportunities to many in the developing world. So we wanted to experiment and understand whether this small invention could really turn into a big possibility,” says Spear.

According to Spear, Nepal was the perfect place to research for the Portal Bikes team. Nepal has soft fills, the hot Tarai belt, remote areas, and extremely populated and polluted places like Kathmandu. “For us, Nepal was the best place to test the hypothesis of whether a cycle could change the developing world,” says Spear.

Spear says that Nepal is a microcosm of so many dynamics and that being in Nepal and working here make him keenly aware of so many things that people take for granted in the western world.

“We have seen developed countries such as Netherlands benefit from bicycles. I want to make Nepal a model country and show to the world that even a developing country can make a lot of progress merely with the help of a small creative invention,” says Spear.

Changing lives
Portal Bikes believes in building productive lives and enhancing the living standards of the marginalized sections of our society. These bikes have helped salesmen carry grocery and good across Kathmandu. One of their customers delivers flowers and shrubs to a nursery. They have also sold their bikes to Kathmandu Guest House in Thamel. “After Thamel became a vehicle free zone, portal bikes have played an integral role in helping hotels pick up their customer’s luggage and transport it to various places,” says Spear.

Portal Bikes also strongly believes in encouraging underprivileged people to make their own investments rather than just funding them to buy a bike. “We want to help people live a dignified life and we realize that giving them money to buy a bike to improve their living standards won’t work. Also, people will not value a product that they have received for free,” says Spear.

The idea behind Portal Bikes is to break the deep-rooted prejudices in our society. They intend to empower people and help them save and invest in something that can become a business. “The confidence that a person gets after running his own business and creating a better future for his family is what we are aiming for,” says Spear.

Active members
Portal Bikes has a great team of young and charismatic workers. According to Tenzing Gurung, social media manager at Portal Bikes, their working motto has always been ‘Meet, Customize and Deploy’. Before creating any product all of them sit together, discuss, and give their own inputs. “There is no hierarchy in our working space. Everyone’s views and opinions are equally respected,” says Gurung.

Gurung also encourages the youth of our country to work. He says that no job is small or big. “What Nepal needs right now are the brain power, muscle power, and will power of its youth. If all of us get together, we can make a huge difference. You can see that even a cycle has the potential to transform many lives,” adds Gurung.

Portal Bikes has also changed the lives of their women employees such as Pushpa Gurung who works as a mechanic there. “This is my first job. I now realize that you get to learn a lot of new things by meeting new people outside the comforts of your home. I also recently learnt how to cycle and it has empowered me quite a lot. I don’t have to depend on others for simple things such as reaching the office. It’s a liberating feeling,” she says. And this is exactly the kind of change that Portal Bikes aims to bring about through its endeavors. They intend to open a new showroom as well as expand their services all over Nepal as a step toward their goal. Meanwhile, they are also working to convince people in Kathmandu to make cycles their primary means of transport. They believe even if the government might not declare Kathmandu a cycle-only zone, if everybody took to cycling it would greatly help ease the traffic congestion as well make the city’s air breathable. 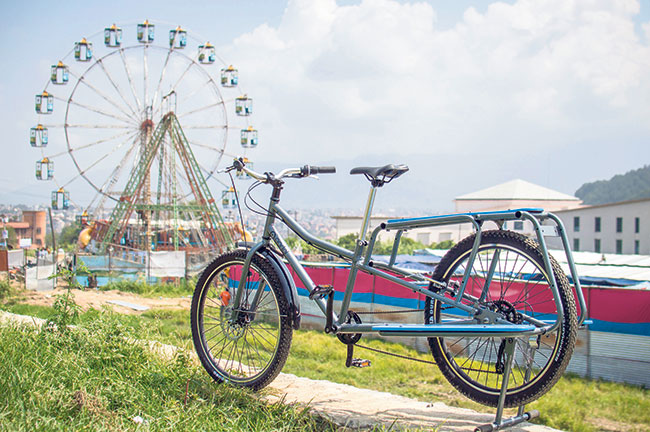 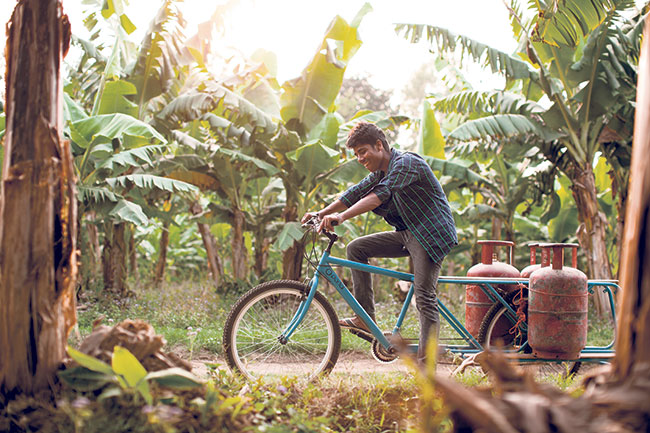 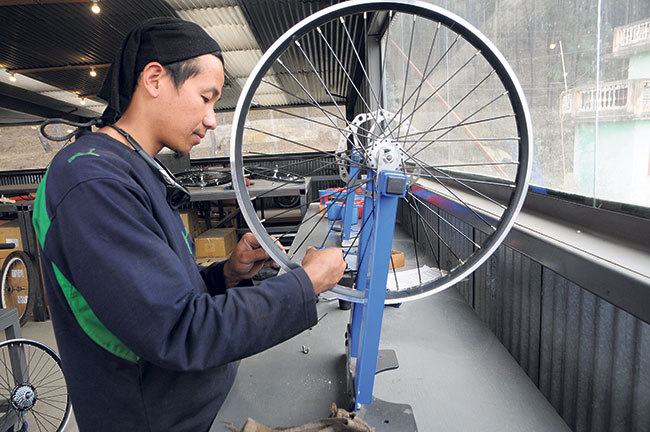 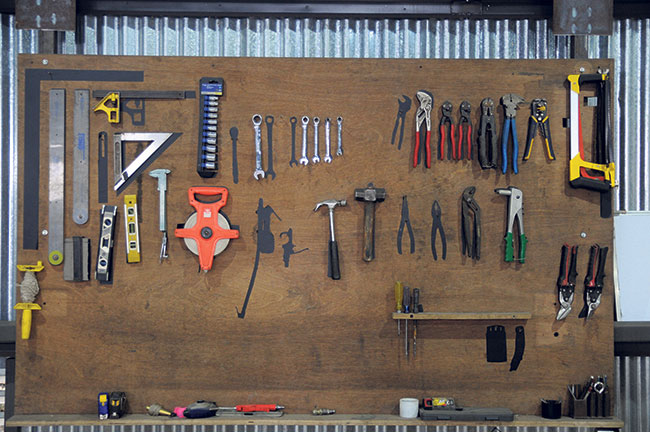 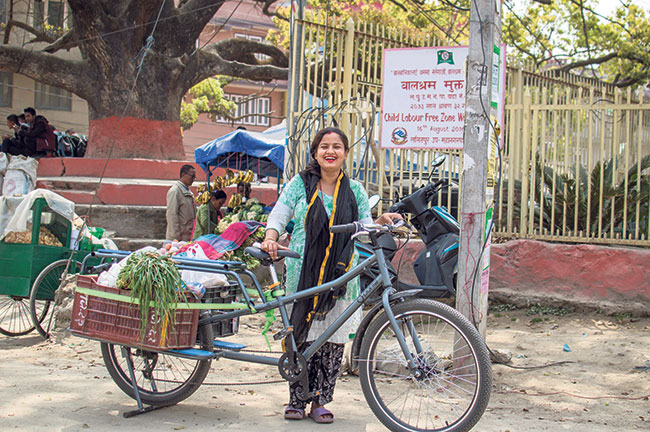