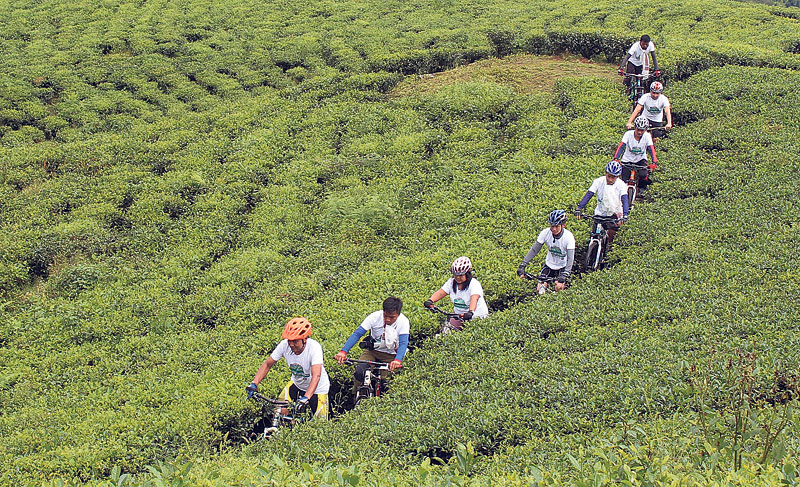 ILAM, Sept 28: The beautiful hills of Ilam and thrilling bicycle ride there. What could be more thrilling than this, claims well known cyclist Pushkar Shah. On Monday the 37th world tourism day was marked by bicyclists across the globe through countless formal and informal programs. The same day, a group led by Shah was paddling their cycles hard in the muddy fields of eastern hills. Though incessant rainfall in the past few days had left the cycling trek muddy and slippery, it could not stop the group from going ahead of their plans to ride bicycle in green hills to mark the tourism day.

Ilam is known for tea, bio diversity and beautiful mountains, among others. Shah stated that Ilam must be known also as the city of cycle tourism as it has enough potential to be so. “We are riding cycle here as the hills are quite suitable for cycling and along with that we are exploring the potentials that these hills have as a destination for cyclists,” Shah said.

The cycling that kicked off on Monday will end in four days. Eight youths participating in the ride including Shah had been through tea farms and other few hills on Monday traveling 22 kilometers. They had started from Kanyam tea farm which is 1500 meter above the sea level and reached Nayabazar getting through Fikkal bazaar and Barbote. “Though it was very muddy path, the journey was pleasant,” Shah said adding that he expects the four-day-long-ride to be a memorable one.

On Tuesday, the cyclists continued their journey from Nayabazar and crossed 18 kilometers towards Dhappokhari of Jamuna where they had received mega welcome from each household of the village. The team members were garlanded and cheered. Biplav Bhattarai, president of Dhappokhari Conservation Committee stated that the locals were honored to welcome cyclists 'who are spreading Ilam's name in the world'. “Everyone here was excited to receive them. They had cycled through muddy paths to reach here today. We are happy that they are making efforts for the fame of this place,” Bhattarai said.

“There is difference between riding cycles in the hills of the west and the east. Eastern hills are far more attractive and rewarding,” Shah stated. He added that cycle tourism has immense prospects in Ilam and other eastern districts unlike in the west. “Foreigners will love cycling here. They can cycle around villages, through the awesome tea and organic vegetable farms, and in parallel to the snow capped Himalayan range while enjoying the weather and flavors of local food and culture,” he added.

What Ilam could offer to 'cycle tourists' is something hardly available anywhere else, according to Shah.  He stressed that both rural tourism and cycle tourism in Ilam will go hand in hand if necessary initiatives are taken. “If we could attract international tourists to Ilam through cycle tourism, this is going to automatically boost tourism in the remote alleys of the villages,” he opined.

According to Shah, rough routes give a different pleasure to cyclists. If there is no risk, the thrill diminishes, he said. “But then, there are few things we must take care of or improve to develop this place as a destination for cycle tourism,” he added.

Among several organizations which have supported the cycling are 'Cycling Dharan' and 'Tusk Mountain'. One of the participants in the cycling team, Binu Rai stated that the journey was thrilling beyond words. “It is the first time that I got an opportunity to ride mountain bike in hills. It was hard to paddle through to the top, however, it was simply amazing,” she said.

Tika Odari, president of Hotel Association Ilam stated that tourists in Ilam could be offered cycle tourism in tourism package itself. “We are sure that tourists would be overwhelmed to get it within tourism package. Once they are lured to it, it can immensely boost tourism in Ilam,” he said. For this, the government and other concerned stakeholders should prioritize improving infrastructures in the region, he added.

Border security emerges as a major challenge in Ilam

ILAM, Oct 20: Suryodaya Municipality of Ilam has been adversely affected by garbage piled up in the city. The problem emerged... Read More...