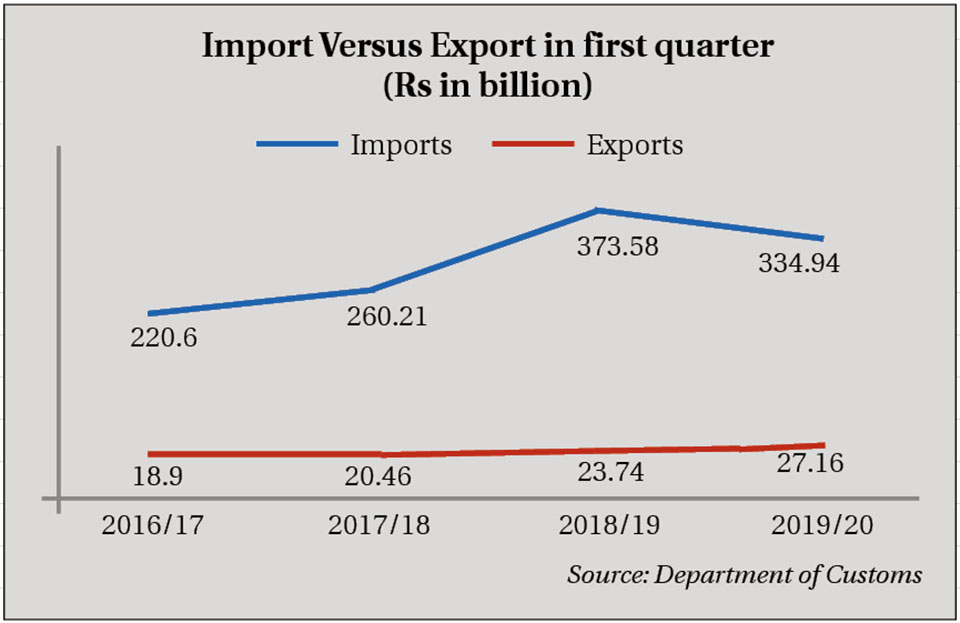 KATHMANDU, Nov 2: Nepal’s trade deficit in the first three months of the current fiscal year declined by an impressive 12 percent, giving the country some respite from the ever-worsening balance of trade over the past several years.

Figures maintained by the Department of Customs show that the improvement in the trade situation is the result of a significant reduction in imports and notable rise in export earnings.

According to the department, Nepal had spent Rs 334.94 billion in imports between mid-July and mid-October, which is down by 10.34 percent compared to the imports of the same period in the last fiscal year. On the other hand, the country’s export earnings soared by 14.41 percent to Rs 27.16 billion during the period.

With an improvement in trade balance, the import to export ratio has also declined to 12.3:1, which means that Nepal spends Rs 12.3 for import for every export worth Re 1. During the same period last year, the ratio was 15.7:1.

Baikuntha Aryal, secretary at the Ministry of Industry, Commerce and Supplies, said the improvement in trade balance is an outcome of the policy reforms made by the government to tackle the ever-expanding trade deficit. “The government has now implemented measures to restrict import of luxury goods and boost exports and this has slowly started showing the results,” said Aryal.

Navaraj Dhakal, spokesperson at the Ministry of Commerce, said the government in recent days has been working to effectively implement its trade deficit minimization strategy, which was enforced a few months ago.

In the past few months, Nepal had also carried out several rounds of trade talks with its major trading partner countries including India, Bangladesh, Bhutan and China. “This has also enabled the exporters to benefit from the simplification in the transit operations and eased the customs procedures in these countries,” said Dhakal.

Dhakal said the government’s revision in the rate of export incentives, simplification of the banking procedures to receive the incentives and extension in the basket of exportable goods for the incentives had also played role in boosting the country’s export earnings.

Implementation of one-door system for exporters and diversification on the issuance of the certificates of origin to the traders have also helped increase the exports, according to Dhakal.

“The ministry has now allowed a number of traders’ associations at the local levels also to issue the certificates of origin to traders to facilitate the exports.”

KATHMANDU, March 22: Imports have risen as economic activities, which slowed down due to COVID-19, have resumed in the country.... Read More...