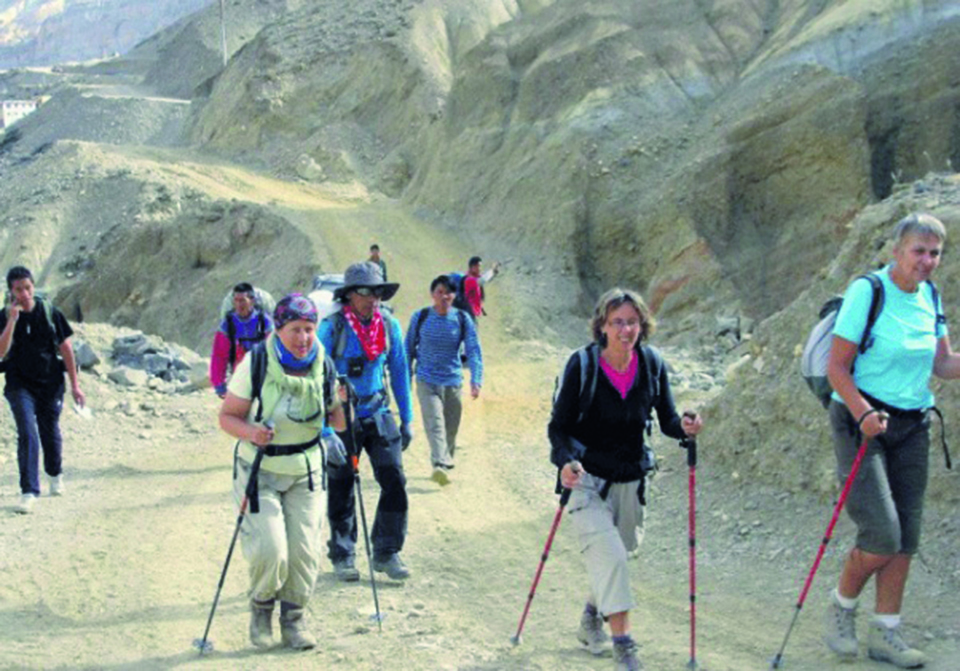 Dilip Poudel/Republica Files A group of tourists trek along the Mustang section of the newly opened Annapurna trekking circuit in this file photo.

POKHARA, April 8: In mid-March, a Korean tourist Ji Ae went missing while she was on her way back to Pokhara after Annapurna Base Camp trek. After eight hours of the ‘disappearance’, a search team rescued her. She had lost her way as she had chosen to tread on an uncommon route during the return.

Last week, police rescued two Czech Republic tourists from the Dhaulagiri trekking route. When rescued it came to fore that Kamil Morovic had broken his leg and Jiri Kalabin was severely injured while they trekking in Aabalbari of Gharjhoba Rural Municipality - 2.

On February 20 this year, Corrie Van Veggel of The Netherlands went missing while she was trekking along the Annapurna range. Her whereabouts remain unknown. Van Veggel sent her family a picture of reaching Mardi Base camp on February 20. Since then, she ahs never been in contact with anyone so far.

The same month, Rajesh Agrawal of India also went missing from Pokhara. He had called his wife from the town but since then he has also not been in touch with any of his family or friends.

French national Nicolas Fin Guardamino who was trekking on the Annapurna circuit has not been in contact since March 3. His family members have expressed worries over his whereabouts and urged the government to expedite the search.

Israeli national Amit Mosche Reichman has not been in contact for the last one and half year. While trekking along the Mardi Mountain route, he had last contacted his friends on 17 October on 2016.

These are examples of the missing tourists in the Annapurna range. Some have even lost their life during trekking. For the searchers looking out for the missing, the question remains: Where are they?

According to Deepakraj Adhikari, president of western regional office of TAAN, trekkers who set on their journey all alone are in high risk of going missing. Going solo is very much dangerous, he said.

“Solo trekkers are going missing at an alarming rate. This is getting quite dangerous,” Adhikari said. “We have been warning them not to trek alone. We discourage them from taking such an extremely risky move. But some of them continue to do it,” he added.

Adhikari said that though the government and trekking entrepreneurs have been taking all the precautions and putting more and more safety measures in place, still much depends on the solo trekkers’ willingness to abide and follow them. Most of the solo trekkers thoroughly follow the guidelines and remains well connected with their friends and concerned authorities, he said. While conceding that there is much to be done on their part, he also pointed that trekkers should be more responsible in remaining safe.

“As per existing provisions, trekkers are restricted on trekking on certain routes unless they meet all qualifying criteria. They must have a professional tourist guide. Along with that, they are advised to travel in group and should be equipped with all safety equipments and materials,” Adhikari said while elaborating on the provisions put in place by his office for safeguarding the tourists. “As these provisions are not strictly implemented, our tourists are continuing going missing.”

One of the factors influencing the choice of trekkers is reducing their travel expenditure. “Some of them considering going solo to cut down cost of guides and porters and some do so that they can explore on their own,” he said. “But most often than not, that’s illegal,” he added.

When tourists go missing, concerned embassies and their family members urge for search. But due to very difficult geography and other technical difficulties, it becomes very much hard to relocate them for the search team.

“In the wilderness, trekkers also face danger from wild animals. Therefore we stress on not going on solo trekking, but unfortunately, some of them bruise aside such recommendations and go ahead” Adhikari stated.

TAAN is going to take the matter more seriously and even tourists themselves must realize, he said. “Unless the tourists realize the magnitude of the risk they take in going solo, it is not going to improve, “he added.

Tourism officer at the ACAP, Rashmi Acharya nods in affirmation. She also puts the blame largely on ‘negligent attitude’ of trekkers, though she feels the government must come very strict on implementing precautionary measures. “The government must be very strict in monitoring and regulating the sector. We must provide all the infrastructures required for safe traveling for the tourists. But on the other hand, the trekkers should also be responsible for their own safety,” she remarked.

KATHMANDU, Augusts 27: Incidents of tourists going missing in Nepal have increased in recent years, posing a serious challenge to the... Read More...

KUALA LUMPUR, Malaysia, Jan 29:  A boat carrying 31 people, including around 20 Chinese tourists, is missing after sailing out... Read More...

KATHMANDU, Dec 25: Thamel - the popular tourist district of Kathmandu - is transforming. It now boasts of better roads and... Read More...