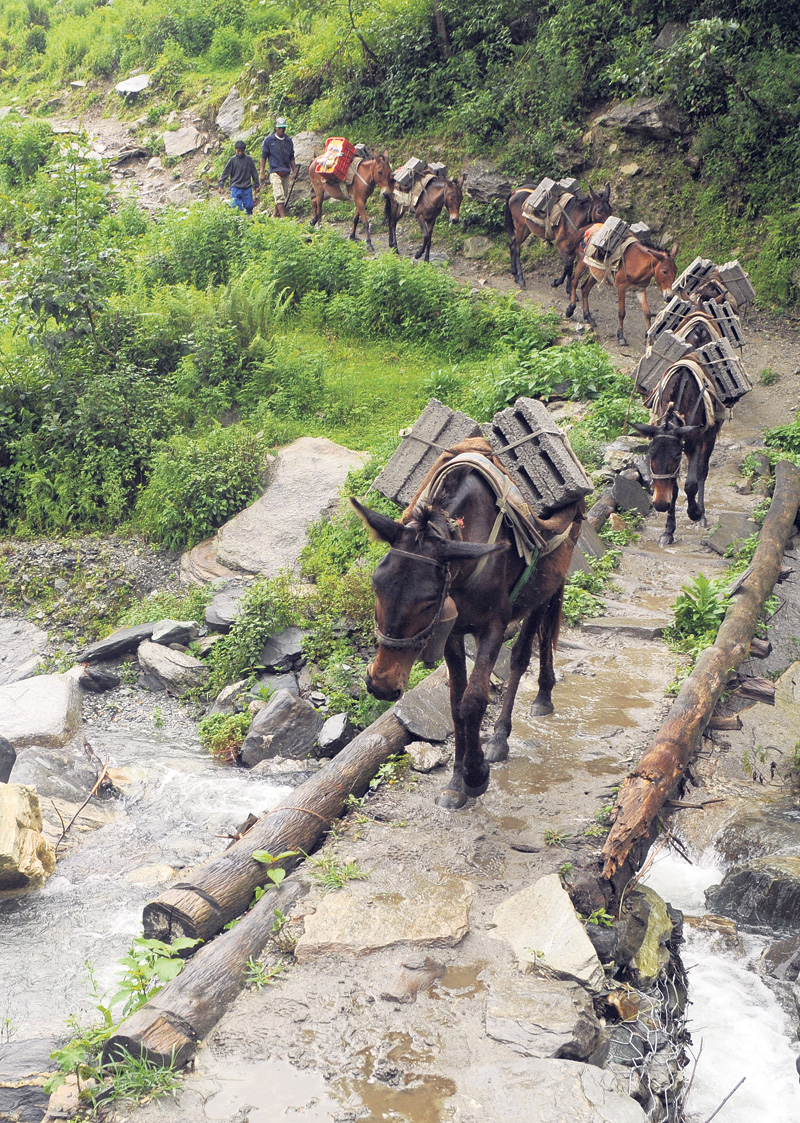 Whoever has ventured into the wilderness of the Himalayas must have heard the constant jingling of bells throughout their journey. Besides the towering peaks, misty weather and steep terrain, the first thing everyone notices during a trek to the Everest Base Camp is the sound of the bells hanging around the necks of mules and yaks that they come across throughout the way.

The pleasant sound is often a warning sign about the impending danger that the seemingly harmless animals might pose in the narrow trails of the Himalayas. Newcomers are warned to give way to the beasts as they might knock the trekkers off the steep cliffs while navigating their way in the narrow and tricky lanes.

“Some animals are unruly. You should stay away from the mules and jopkes – a cross between yaks and cows – that have ropes tied through their nose to control them. Most of them are tied with bells,” said a local Sherpa.

But there’s more than what meets the eye.

“These are harmless animals but people are afraid of them,” says Uttam Kafle, executive director of Animal Nepal.

Most of the animals are hard-working gentle breeds, that carry goods upon their backs to fulfill the needs of the humans.

“Such animals have become alternative means of transportation in places where there aren’t any roads,” says Kafle.

Tourism industry in the Everest region, like many other remote places of Nepal, thrives on the sacrifice of the animals. The mules, jopkes and yaks carry every bit of essentials including rice, gas, kerosene, cement and other goods needed for survival of humans in the unforgiving terrain of the Himalayas. In return for their hard efforts, they only get mistreated.

“Transporting goods on animals is much cheaper than hiring human labor,” says Bhim Shrestha, a hotel entrepreneur in the region.

According to Shrestha, it costs a minimum of Rs 45 per kg to transport goods on mules while the cost of hiring porters is much higher. Ferrying goods through aircraft would be unimaginably high, he further says.

Shrestha informed that it takes three days for mules to transport goods from district headquarters Salleri to the popular tourist destination Namche – the gateway to Everest – due to lack of roads.

Interestingly, the cost of food high up in Namche is said to be much lower than in lowland Lukla since the latter imports food through aircrafts.The cost factor has made animals the first choice in transporting goods.

“Normally, the animals can carry up to 30 kilos of goods. But they are often overloaded with goods,” said one of the benevolent herd leaders of Lukla, who did not mention his name.

According to the newly-released Animal Welfare Directive 2073, owners are not allowed to make animals carry goods more than 40 percent of their body weight. The directive also mentions the distance that working animals should travel every day. However, the new rules have been flouted in the remote mountains as people there are unaware about any such laws.

“There isn’t any animal welfare act in Nepal,” laments Kazi Sherpa, unaware about the latest development.

Nirmal Sharma, communications officer at Animal Nepal, informed The Week that the new regulations have been already published in the Nepal Gazette and it will take some time before people become aware about the rules.

Sherpa, on the other hand, recalls the brutality with which herd owners treat the animals. According to Sherpa, mules are prone to infection on their heels caused by friction and heat.

“On sunny days, the heat in this cold place is unbearable, especially for animals because their hooves get heated due to friction on the rocky trail.  It often leads to infection and they cannot walk. If left untreated, either they have to be amputated or they will die soon,” says Sherpa, adding, “But the herders here are not bothered about it at all.”
Sherpa further says that the cuts in the bodies of animals due to overload are nothing compared to the infection on the heels. “The body wounds are visible but the infections on the heels cannot be seen. And people here are unable to understand the problem,” he said.

“I feel really sorry for the poor animals. They cannot complain and so they suffer in silence,” he added.

Another interesting fact is that the mules that transport goods in the mountains are not the native species. According to Animal Nepal, the mules are bred in Indian cities and then sold to Nepal. Then from the bordering towns, the mules are sent across the country to toil for the rest of their lives.

“The mules are not meant to walk on the rocky trails. But they adjust slowly,” says Animal Nepal’s Executive Director Kafle.

As long as the region lacks roads, the animals will continue to suffer such cruel fate.
Tourists visit the mesmerizing mountains and see the beauty of the peaks but they fail to notice the darker side of animal abuse going on unabated in the region. Or probably, they see it but choose to remain silent. For most, it’s a matter of convenience over care.

May 31: In Paris, the Louvre Museum closed for a day this week because workers said the crowds were too... Read More...

Department of Tourism pledges to do more for Everest cleanup

Goods worth Rs 7.87 billion traded via online system in the first nine months of the current FY
22 hours ago