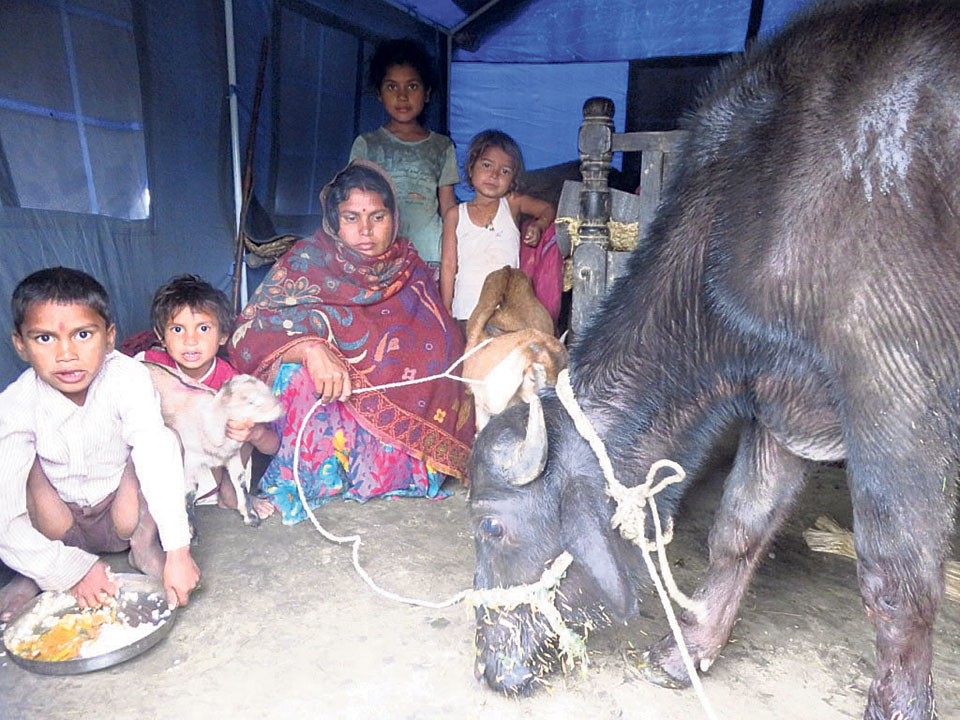 BARA, April 10: On Tuesday, Ram Kumari Devi Mandal, 42, of Rampurwa along with her six little children were found sharing their makeshift tent with their buffalo and six goats. As they cannot keep their cattle outside due to the torrential rainfall, the victims of the-ever recorded tornado in Nepal are obliged to sleep with their cattle.

As they have got nothing left in the name of asset, Ram Kumari and her family members fear that they might lose their cattle to wild animals and rain. The tent offered by the Nepal Army is not enough for a family of eight members.

“We have been provided with just one tent. Even after ten days of the disaster, no authority has made efforts to help us repair our damaged houses,” she laments. According to her, she would have gone to her parental home for shelter if she had a small family.

As they have been sleeping and eating with the buffaloes and goats, they fear that they might get infected. However, they have no other option as they have to protect the cattle, which are their only source of income.

Since the disaster damaged her house, Ram Kumari is having sleepless nights thinking how long will her small children have to spend their nights under the open sky.

It has been difficult for her to cook meal in the same place where the cattle defecate.

Many other victims in Bara and Parsa districts have been sharing their little tents with their large family and cattle.

Hailstorm creates panic among the victims

Tuesday’s rain accompanied by hailstones troubled a large number of victims living a miserable life in tents. The hailstones that occurred simultaneously were so powerful that it wiped out several fields and huts in tarai. Adham Miya of Purainiya says the downpour frightened little children.

As the incessant rainfall resulted in the drop in temperature, children and elderly people struggled in the cold in lack of warm clothes. The recently repaired tower of Radio Simara fell due to the recent storm.

Most Bara ‘tornado’ victims were poor, with weaker homes

BARA, April 8: Ijhar Miya of Puranaiya village laments his inability to build a strong house like that of his... Read More...

BARA, April 8: Krishna Sah, 35, of Kalaiya Sub-metropolitan city lost his home to the first ever tornado recorded in... Read More...