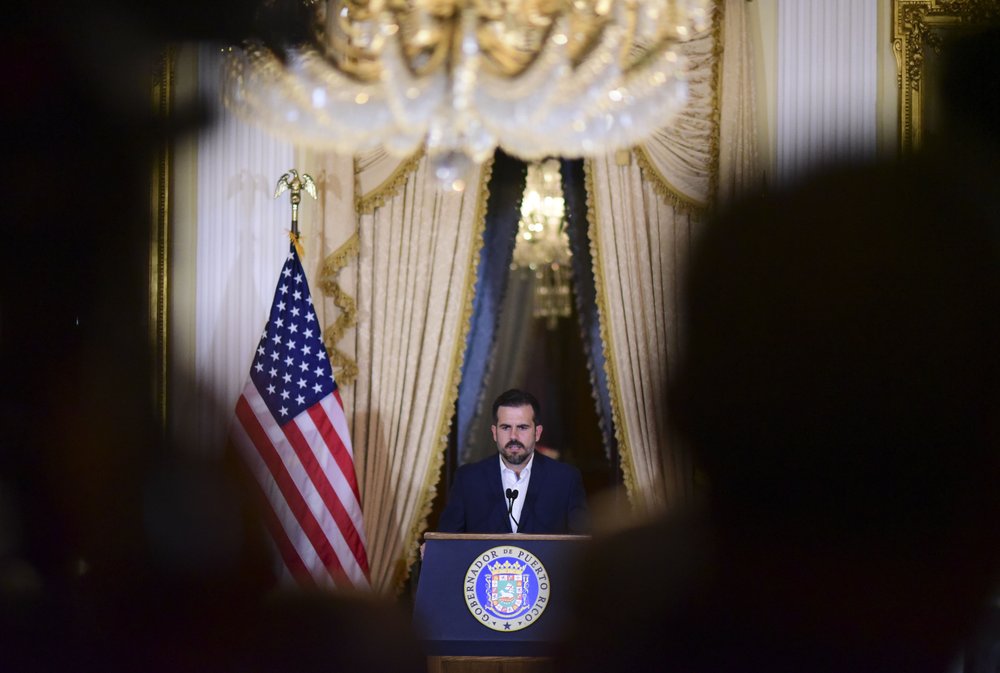 Puerto Rico governor Ricardo Rossello holds a press conference, almost two days after federal authorities arrested the island's former secretary of education and five other people on charges of steering federal money to unqualified, politically connected contractors, in San Juan, Puerto Rico, Thursday, July 11, 2019. At the time of the arrests, Rossello was in the middle of a family vacation in France, which he canceled to travel back to the Island. U.S. Attorney for Puerto Rico Rosa Emilia Rodríguez said Gov. Ricardo Rossello was not involved in the investigation. (AP Photo/Carlos Giusti)

SAN JUAN, July 14: Puerto Rico’s Gov. Ricardo Rosselló announced Saturday that his chief financial officer and secretary of state will step down following their participation in a private chat that used profanities to describe an ex-New York City official and a federal control board overseeing the island’s finances.

The U.S. territory’s CFO Christian Sobrino, who is also the governor’s representative to the control board, announced he was stepping down via Twitter on Saturday. Its Secretary of State Luis G. Rivera Marín also offered his resignation.

Rosselló later released a statement saying he would let go members of his administration who participated in the chat on a messaging system used by government officials. The release of the chat’s contents in local media had led to calls for the governor’s resignation.

Rosselló apologized for the comments late Thursday, saying he’d been working 18-hour days and releasing tensions when he called former New York City Council speaker Melissa Mark-Viverito the Spanish word for “whore” and in English told the oversight board to “go f--- yourself” followed by a string of emojis with the middle finger raised.

“Aware that the current environment cannot be maintained, I have communicated to all the other public officials involved in the chat that I will have to dispense with their services and/or their advice,” he said in the statement.

He said he would ask Ricardo Llerandi to remain as Puerto Rico’s secretary of the interior and Anthony Maceira to stay as secretary of Public Affairs.

“This is a very painful situation for me, as Governor, as a human being and as a Puerto Rican,” Rosselló said. “But I recognize there is no other way out and there is no worthwhile forgiveness on my part that does not include corrections and clear signs of intent to change.”

Justice Secretary Wanda Vázquez announced that she was appointing a special task force to determine whether any laws were broken regarding the chat and comments made.

The comments had drawn the ire of many Puerto Ricans who said they were ashamed of his language and of how this might affect the reputation of the U.S. territory, which had already come under scrutiny earlier this week with the arrests of former government officials including the island’s education secretary.

Rosselló said late Thursday that he had not yet spoken to Mark-Viverito, who posted a lengthy statement on Twitter that read in part, “A person who uses that language against a woman, whether a public figure or not, should not govern Puerto Rico ...this type of behavior is completely unacceptable.”

In the chat, Rosselló wrote that he was upset Mark-Viverito had criticized Tom Perez, chair of the Democratic National Committee, for supporting statehood for Puerto Rico.

Puerto Rican pop star Ricky Martin, who was mentioned in the chat with a homophobic comment, urged Rosselló to step down.

Martin tweeted that the governor “lacks the abilities of a true leader, who inspires, stimulates and guides by example so that our people attain a higher level of life.”

Rosselló has also lost the support of top members from his pro-statehood party, including the presidents of Puerto Rico’s Senate and House of Representatives and the Federation of Mayors of his New Progressive Party.

Rosselló has said he will not resign.

The turmoil comes as Puerto Rico battles a 13-year recession, a debt crisis and tries to from devastating hurricanes in 2017.

Officials said the alleged fraud involves $15.5 million worth of federal funding issued between 2017 and 2019. They said $13 million was spent by Puerto Rico’s Department of Education while Keleher was secretary and another $2.5 million spent by Ángela Ávila Marrero when she was director of Puerto Rico’s Health Insurance Administration. Ávila Marrero was charged along with businessmen Fernando Scherrer-Caillet and Alberto Velázquez-Piñol, and education contractors Glenda E. Ponce-Mendoza and Mayra Ponce-Mendoza, who are sisters.

Officials said there was no evidence that Keleher or Ávila-Marrero had personally benefited from the scheme.