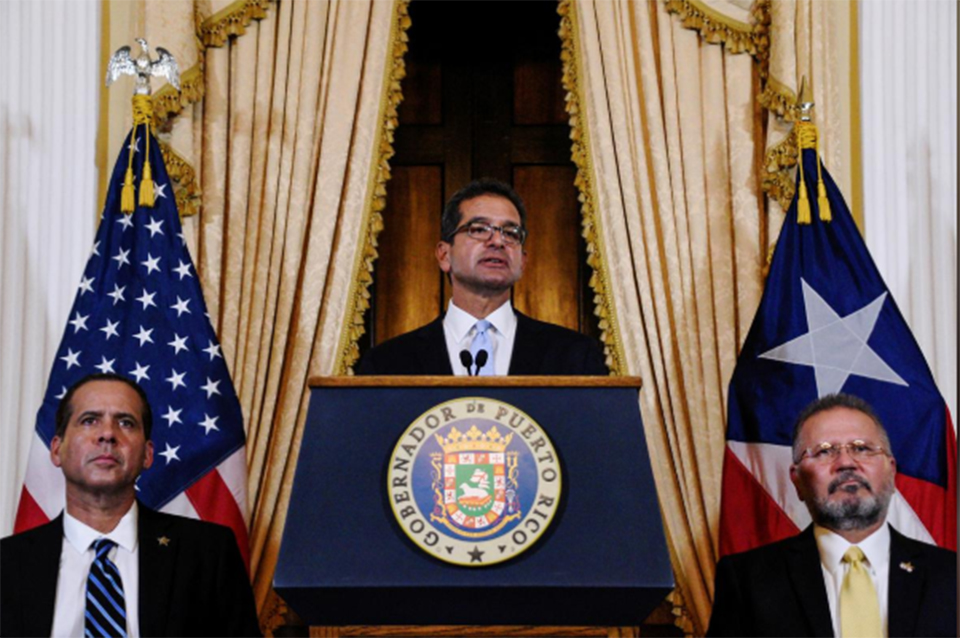 SAN JUAN, Aug 3: The handpicked successor to disgraced Puerto Rico Governor Ricardo Rossello was sworn in on Friday after Rossello stepped down, but lawyer Pedro Pierluisi said his term as governor might be short as the island’s Senate still had to ratify his position.

At his first news conference as leader of the bankrupt U.S. territory, Pierluisi said Puerto Rico’s Senate would meet on Wednesday to vote on whether to confirm his position as governor.

Pierluisi, a lawyer who formerly advised the despised, federally created board supervising Puerto Rico’s bankruptcy, was sworn in even though his appointment had not yet gone before the Senate for a vote. Senate President Thomas Rivera Schatz, who calls Pierluisi “the lawyer for Puerto Rico’s number one enemy,” termed the controversial move “unethical and illegal.”

“The Senate will have its say and by the end of Wednesday we’ll know whether I am ratified,” Pierluisi, who until last week was a corporate attorney for Washington law firm O’Neill & Borges, told reporters. “If I am not ratified then the second in line, the secretary of justice of Puerto Rico, will take over the governorship.”

Rossello, a 40-year-old, first-term governor, had tapped Pierluisi as secretary of state, a position that would put him first in line as successor to the governor.

The island’s leading newspaper El Nuevo Dia subsequently reported that Schatz had rescheduled the session to vote on the appointment for Monday.

Hundreds of people, many waving the Puerto Rican flag, chanted and rang bells outside the governor’s mansion in the historic center of San Juan, after Rossello’s resignation. Police on several occasions warned they would fire tear gas to disperse protesters, but by 9.30 p.m. they had yet to do so or move in on demonstrators.

Pierluisi’s instatement capped off a week of political chaos in Puerto Rico after Rossello said he would resign over offensive chat messages that drew around a third of the island’s 3.2 million people to the streets in protest. The chats between Rossello and top aides took aim at female politicians, gay celebrities like Ricky Martin and poked fun at ordinary Puerto Ricans.

The publication of the messages unleashed anger building for years in Puerto Rico over the island’s painful bankruptcy process, ineffective hurricane recovery efforts and corruption scandals linked to a string of past governors, including Rossello’s father.

The departure of Rossello began a succession battle, with leaders of his ruling party opposing Pierluisi on grounds his work for the control board, known for targeting pensions and bonuses, posed conflicts of interest.

Puerto Rico’s House of Representatives on Friday approved Pierluisi as secretary of state.

Until an appointment was confirmed by both chambers, Schatz and other senators said the next in line for governor, under law, was Justice Secretary Wanda Vázquez

“He did not respect the wishes of the people. In fact, he mocked them using new accomplices,” Schatz said in a tweet after Rossello announced that Pierluisi would be sworn in. “The disrespect, the lying the unethical and illegal behavior went viral.”

The island’s political stability is a concern to the U.S. federal government which has allocated $42.5 billion to hurricane recovery efforts. Investors are watching its efforts to restructure $120 billion in debt and pension liabilities from the largest ever bankruptcy in the U.S. municipal bond market.

Puerto Rican law professor Julio Fontanet saw the risk of a “constitutional crisis,” which could involve the island’s supreme court, given the law, in his opinion, made clear the justice secretary should have been appointed governor.

“This constitutes a completely unnecessary crisis, the fruit of the irresponsibility and immaturity of Ricardo Rossello,” Fontanet said in a television interview.