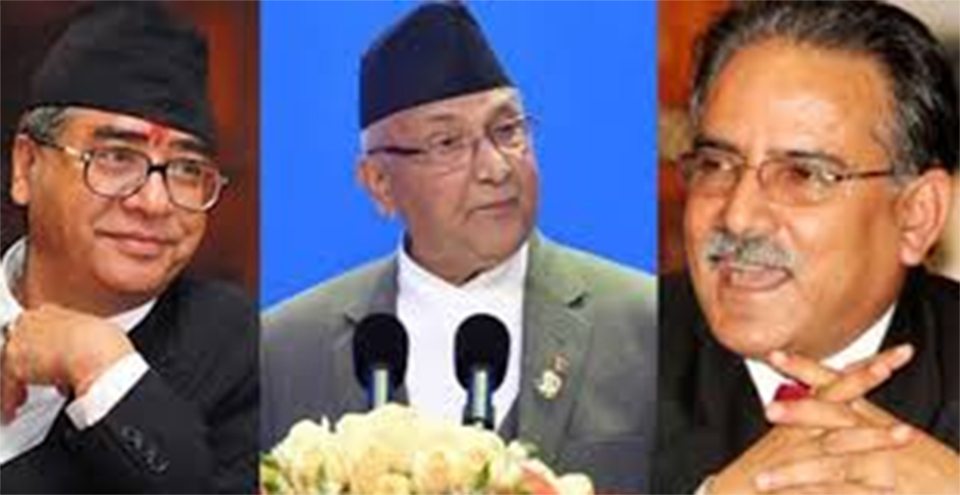 KATHMANDU, June 6: Top leaders of major political parties have started consultations on how to settle Maoist conflict-era cases, as pressure mounts on them for delaying justice for conflict victims.

Chairmen duo of the ruling Nepal Communist Party KP Sharma Oli and Pushpa Kamal Dahal and main opposition Nepali Congress President Sher Bahadur Deuba assembled at the prime minister's official residence at Baluwatar and discussed possible modalities for wrapping up the much prolonged TJ process. The consultations were initiated a day after Australian Ambassador Pete Budd warned that Nepali leaders directly or indirectly involved in rights violations could face arrest while traveling to any foreign country including Australia if the TJ issues are not resolved in time.

The government is facing pressure from the international community for the delay in settling conflict-era cases. Efforts to settle the cases, however, hit a snag after the conflict victims threatened to boycott the TJ process if the commissioners of the TJ bodies were appointed without first clearing the legal ambiguities.

It is amid this mounting pressure from various stakeholders that the political leaders gathered on Wednesday.

Law Minister Bhanu Bhakta Dhakal and party leaders with legal backgrounds including Subas Nembag were present at the meeting. According to them, the meeting was focused on how to take the un-reconciled conflict victims into confidence for settling the conflict-era cases at the earliest.

“We are in the process of finalizing the law, taking the conflict victims into confidence, and resuming stalled investigations into the conflict-era cases,” said one party leader involved in the discussions.

Both the TJ bodies--Truth and Reconciliation Commission and Commission of Investigation on Enforced Disappeared Persons—are currently without their commissioners as the incumbents retired back in April.

Established in February 2015, the CIEDP and TRC were mandated to complete their investigations into the conflict-era cases and ensure justice to the victims, all within two years. The government subsequently extended the deadlines for these bodies by two years.

Most recently, the government extended the terms of both TJ bodies by a year in the last week of February. The terms of the commissioners at both commissions, however, were extended just for three months and they were asked to wrap up their work and submit their reports to the government by that deadline.

Before the extension of terms for the TJ bodies, a section of human rights activists and politicians had floated the idea of forming a High-Level Political Mechanism to settle the cases of human rights violations under a so-called 'home grown model'. But the conflict victims opposed the idea of any powerful cross-party mechanism to settle the cases, suspecting that under such a model the human rights violators could enjoy impunity under political protection.

Meanwhile, a committee formed to recommend new commissioners for the TJ bodies has not been able to appoint any commissioners, following protests from the conflict victims.

Informed sources said the government is preparing to revise the TJ- related law, taking the conflict victims into confidence. They, however, have not disclosed anything about how the victims' demands will be addressed.

TJ process prolonged as victims insist on no impunity