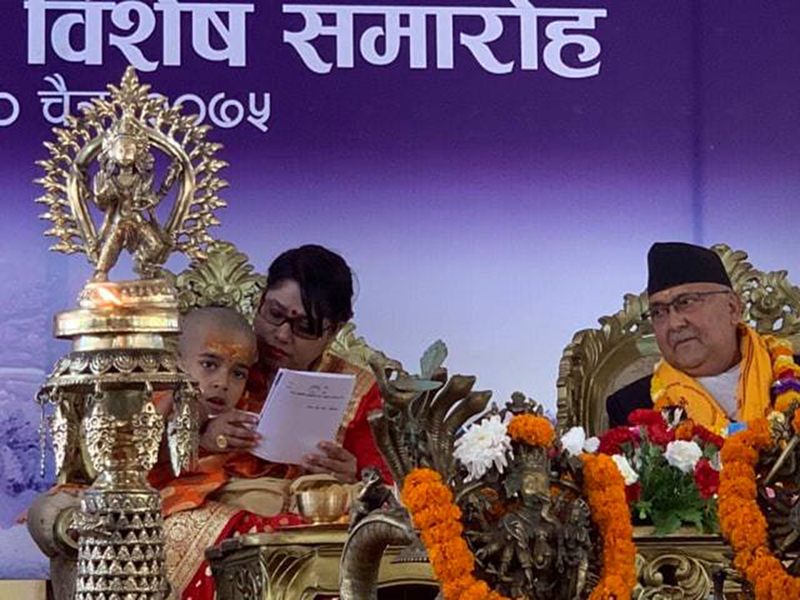 KATHMANDU, April 14: Nine-year-old Aaditya Dahal, more popularly known as Balgyani Guru Acharya, has become a household name among Hindu worshipers across the country. His followers consider him an incarnation of god himself and claim that his intellect and wisdom know no bounds.

On the occasion of his bratabandha (scared thread ceremony) which took place on Saturday, hundreds were seen crowded in Trigajur Shivalaya, which was designed by Aaditya himself. Prime Minister KP Oli, who is also one of the two chairs of the ruling Nepal Communist Party (NCP), the other NCP chair Pushpa Kamal Dahal, and Nepali Congress President Sher Bahadur Deuba, were among those attending Aditya's bratabandha.

People of all ages, from youths to adults were crowded around his temple, hopeful of catching a glimpse of the boy. People were lined up in a long queue, yet the enthusiasm and devotion of the worshipers was least affected.

Nineteen-year-old Prashna Paudel, currently enrolled in Dilli Bazar Kanya Multiple Campus said that such vast knowledge in a mere child is no less than a miracle. The worshipers stated that alongside having immeasurable knowledge of the Vedas and other holy Hindu scriptures, Aaditya is also equally adept in Science, Technology, Finance, and Language among others. What is intriguing is that the child has never had any prior schooling or tutoring of any forms.

Yugraj Pandey believes that Balgyani Guru Acharya is a form of God brought to life. “His power is limitless,” he said.

Despite certain physical disabilities in walking and speaking, the young child has performed certain miracles. Dr Upendra Mahato, Chairman of the organizing committee for today's program says his intelligence is untold.

Some have even begun drawing parallels between him and Lord Gautam Buddha. Mahato stated, “He is an asset to the county.”