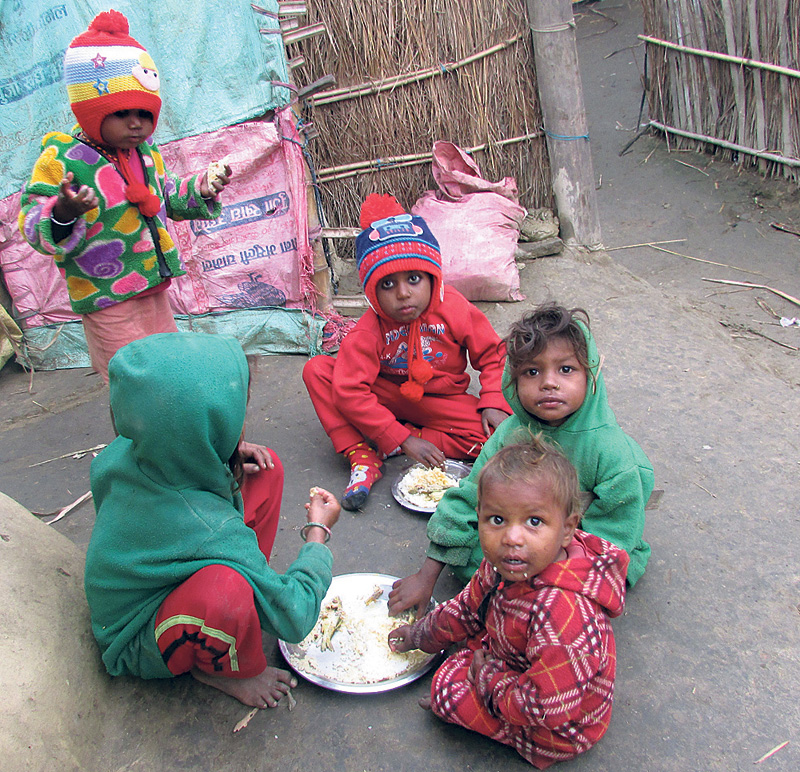 Our children do not go to school as they feel humiliated. They do not like to mix up with others, as they are treated very badly.
– Bramhadev Majhi

SARLAHI, Feb 14: Ramkali Devi, 65, and her husband Shaheb Majhi, 70 had a dream. Locals of Babargunj, they wanted a toilet for their big family. However, the couple now thinks that their dream would not come true. “In fact, it is not for us.

We never grew using a toilet and now we are dying soon,” said Ramkali. “It is for the young family members we wanted a toilet. We feel ashamed when we see our daughter-in-laws doing it in the open field,” she added.

Ramkali and Shaheb feel even more for their newly-wedded granddaughter-in-law. They do not like it when she has to go far away from the house to relieve herself. “We sneak into the fields at favorable times for peeing and defecating. But seeing her looking for a place for this embarrasses us,” Ramkali stated.

They curse poverty for making their life so miserable. Neither did they ever have enough to eat, nor warm clothes and comfort ever came their way. And now, though toilets have become too common in towns and even in villages, Musahars are still deprived of them, he added.

The family has two small huts where three generations of the family live.

There are 46 Musahar families in Babargunj. Due to the lack of toilets, they visit roadsides and fields for defecation. They do not have their own land. Even though they have been living in huts in the area for ages, nobody owns a land registration paper. And landless families cannot apply for grant or expect support from non-government organizations for toilet construction.

The tragedy does not end here. The government has given so much priority to toilet and sanitation that people in the rural areas have to produce certificates for having a toilet in order to claim other government services. Even important official documents like citizenship, birth and death certificates might not be provided in the lack of evidence of having a toilet in the house. In Madhes, construction of toilets in the last two years has grown by manifold due to this reason. Interestingly, open defecation however still remains a challenge in the plains as the locals feel ‘suffocated’ while peeing or defecating in a toilet.

“Now what could we do?” questions Shaheb. “We got to repair our hut every year. Even for that we do not get enough material. If not repaired, it gets useless and cannot stand rain or winter. We cannot earn and collect money for other purpose. From where would we get the money to buy land and then construct a toilet there?” he added.

Not all Mushahar families are yet aware that the lack of a toilet might invite troubles for them. However, those who have heard of it are extremely worried. “We may not get anything from the government. This is what we have heard. If so, we are going to live even a miserable life,” Shaheb said. “But is it that we are not willing to construct a toilet? We have no means to do that. We feel our life has become meaningless,” he added.

Meanwhile, Pramila Majhi, another local of Babargunj, asserted that the government’s plan to ensure proper sanitation and hygiene would be successful only if the marginalized people are seriously considered. Despite huge budget spent for open defecation free projects, rounds of awareness campaigns held time to time, Musahars are not included. “What is the use then?  It’s a sheer failure of the government,” she claimed.

The Drinking Water and Sanitation Division Office informed that 22 VDCs in Sarlahi have so far been declared as Open Defecation Free (ODF) zones. There are a total of 84 VDCs and five municipalities in the district. According to Shiva Shankar Rauniyar, engineer at the Division, construction of drinking water and sanitation facilities is underway in poor communities.

School, too, a far-fetched dream

The Musahar community is deprived not only of sanitation but also education facilities. Even though there are government schools around, the children do not go there. There are over 50 children in Babargunj and they do not go to school. They are also deprived of facilities meant for Dalit children as they do not have birth certificates.

“Our children do not go to school as they feel humiliated. They do not like to mix up with others, as they are treated very badly,” said Bramhadev Majhi. He added that there is no electricity either in the Musahar settlement.

PALPA, Mar 12: Pushpa Rana does not go to school during menstruation. The eighth grader stays at home the whole five... Read More...

A Midsummer Night’s Dream at the British School

LALITPUR, Nov13: A Midsummer Night’s Dream written by William Shakespeare will be staged at the British School as a tribute to... Read More...