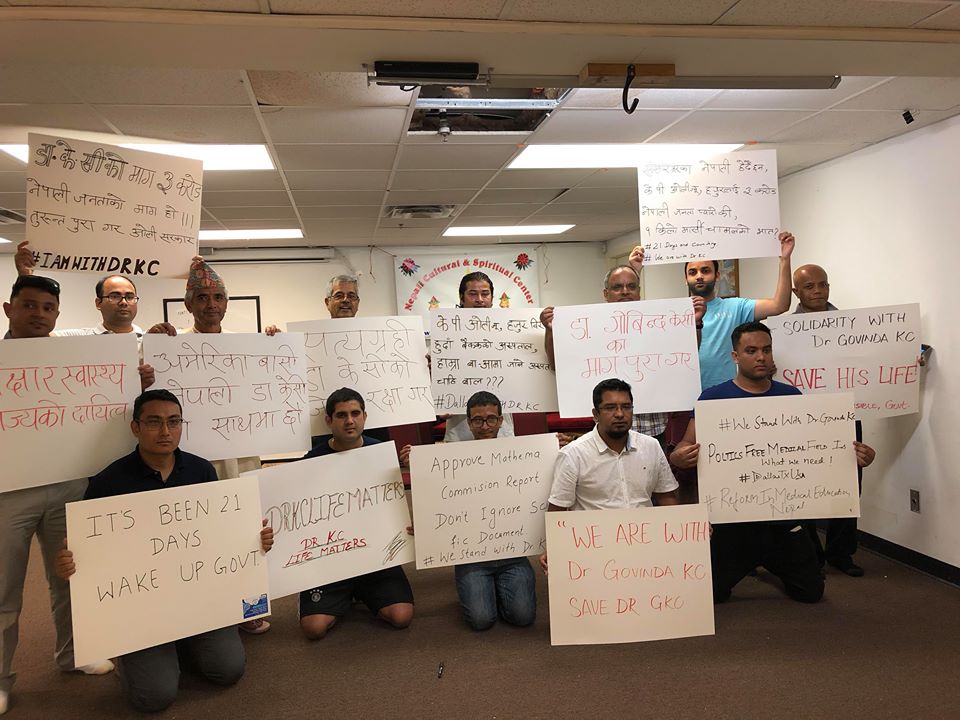 UNITED STATES, July 21: A petition filed on Change.org in the United States urging the government to save life of Dr. Govinda KC and fulfill the raised demands he’s championed for has seen support of 15,000 people so far. Once 100,000 people sign the petition, the organizers aim to submit it to the United Nations, according to activist Shiva Prakash.

Suman Neupane, a social activist in Texas said that the demands raised by Dr. KC were for the benefit of the country and its people. “Hence it is important that everyone pours support to Dr. KC.” The Non Resident Nepali –America’s youth coordinator, Swaraj Khati echoed the same.

Likewise, at Boston, Nepalis have also made attempts to draw attention of the UNHCR. Shiva Prakash, who initiated the campaign, has urged everyone to join hands to save Dr. KC’s life by sharing messages through social media.

While 100,000 signatures are required to appeal a hearing at the UNHCR, with deteriorating health conditions, petitioners have registered a complaint against government’s human rights violation at the UNHCR.

Shiva Prakash said that they had initiated the petition after recognizing possibilities of reaching higher international authorizes including the United Nations, Human Rights Commission among others.  “If we’re able to put together 100,000 signatures, we’d be able to draw attention of the Commission,” Shiva Prakash said.

Public Rally on Saturday in support of Dr Govinda KC

KATHMANDU, Oct 13: A public awareness rally in support of Dr Govinda KC has been scheduled to be organized on Saturday,... Read More...

KATHMANDU, July 25: Dr  Govinda KC, who had been staging a fast-unto-death demanding reforms in the medical education sector and... Read More...