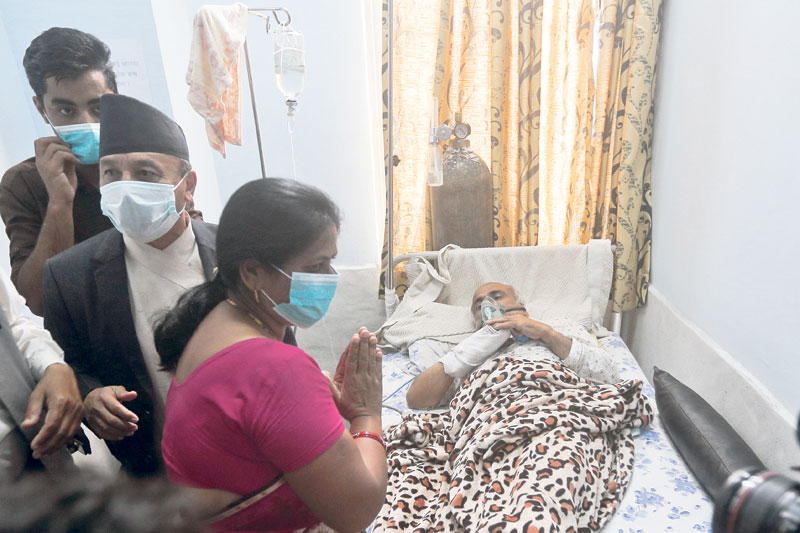 Members of the parliament’s Social Justice and Human Rights Committee visit Dr Govinda KC at TU Teaching Hospital on the ninth day of his fast-unto-death on Monday.(Dinesh Gole/Republica)

TUTH residents to shun OPD services from Tuesday
KATHMANDU, July 19: The parliament's Social Justice and Human Rights Committee (SJRC) on Monday has asked Prime Minister KP Sharma Oli to take immediate action to save Dr Govinda KC, who is on a fast-unto-death for the last nine days, demanding reforms in the medical education sector.

The committee sent a letter to the prime minister asking him to save the doctor's life after a group of lawmakers from the same committee visited the TU Teaching Hospital, Maharajgunj and gathered first-hand information about the deteriorating condition of Dr KC on Monday.

Sushil Kumar Shrestha, chairman of the parliamentary committee, who led the team of lawmakers said that they found KC's situation fast deteriorating. "We would like to draw the attention of the prime minister toward the deteriorating condition of Dr KC and request the government to ensure his constitutional right to live and take necessary steps to save him," reads a letter sent to the prime minister on Monday.

The committee also asked the prime minister to fulfill the demands put forth by Dr KC as per the agreements reached in the past.

Doctors attending to Dr KC have informed that his condition has deteriorated further on Monday. They said Dr KC is feeling drowsy and having difficulty in breathing. "He needs continuous oxygen supply to maintain oxygen saturation in blood," stated a health bulletin issued by Dr Dibya Singh Shah, who is attending to him.

Dr KC is also complaining of persistent chest pain, severe body aches and muscle cramps. His blood pressure and blood sugar too are on the low side. "Considering his deteriorating condition, he may need emergency medical support any time," reads the bulletin.

Resident doctors pursuing MD/MS degrees under the Institute of Medicine (IoM) have decided not to attend to patients at the Out-Patient Department (OPD) at the Tribhuvan University Teaching Hospital (TUTH) from Tuesday.

Accusing the concerned authorities of turning a deaf ear toward the demands of Dr KC, who is on a fast-unto-death for the past nine days, the resident doctors have decided not to serve OPD patients. However, other doctors at TUTH will continue to provide OPD services.

Hundreds of patients, who visit TUTH for medical care, will suffer from Tuesday, as resident doctors are the ones who provide medical care to majority of patients. Thousands of patients from across the country visit the TUTH for quality care at affordable rates.

“We are compelled to take this step to save Dr KC's life,” said a statement issued by the National Resident Doctors' Association on Monday.

The OPD at TUTH provides medical services to around 1,800 patients every day.

Protesting students, who have been shunning classes to pile pressure on the govenrment to heed Dr KC's demands, however, said that they will continue to provide in-patient services, emergency services and services at the intensive care unit (ICU) and coronary care unit (CCU).

For the past few days, the doctors have been wearing black arm bands while treating patients since last few days to draw the attention of authorities toward Dr KC's demands and his deteriorating condition.

Meanwhile, Dr KC, who had been staging hunger strike in a small congested room, has been shifted to a spacious hall.

Dr Pradeep Krishna Shrestha, and Dr Dibya Singh Shah, who are attending to Dr KC had requested him to move to a big room.

Dr KC started the eighth hunger strike from Sunday last week putting forth his four-point demand that includes reform in the medical education sector and impeachment of Lokman Singh Karki, the chief commissioner of the Commission for the Investigation of Abuse of Authority (CIAA).

He has also demanded that all seats at medical universities run by the government be made free, at least one government medical college be established in all the federal provinces, no affiliation be given to any medical, dental or nursing college in Kathmandu Valley for the next 10 years, and fee ceilings be implemented from this year as fixed by the Ministry of Education, the universities and Nepal Medical Council.

KATHMANDU, Aug 5: Solidarity for Dr Govinda K C Alliance has submitted a memorandum to the Chairman the Good Governance and... Read More...

KATHMANDU, Nov 29: The National Human Rights Commission (NHRC) has called upon the government to find out a solution through... Read More...