To escape the crowd 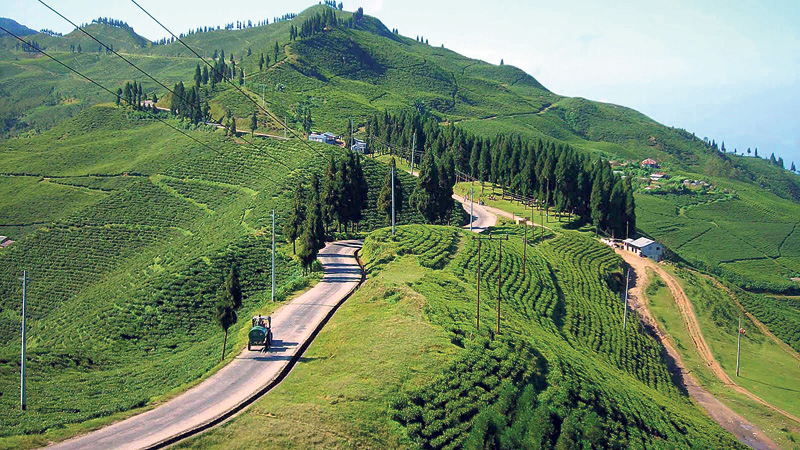 There are always two ways of traveling and discovering a place: There is the tourist’s route and then there is the local way. Even when you are trying to navigate your way through the same location, you will be surprised at the disparity in the things that these two routes have to reveal.

It’s not that we are saying one way is better than the other, we simply believe that both ways ought to be explored. This applies to when you are traveling internally in your country as well. So The Week brings to you the local point of view. If you catch yourself in any of these districts, after covering the touristy spots, you may want to check out these places and activities as well.

Namche bazaar and the Everest base camp are pretty much given recommendations if you happen to have a chance to fly to this famous destination. However, even if you don’t have any plans of cutting off an Everest ascend from your bucket list or have enough budget to enjoy the high altitude luxury of Namche (dollar) bazaar, Solu still has plenty to offer.

You can start from the first Sherpa settlement that you will find on your Everest trek, Junbesi. This is considered lower Solu. Once you are at Phaplu, you can trek to the picturesque Junbesi Valley that offers a rare insight into the daily village life of this predominantly Sherpa region. The fascinating Thubten Chholing Monastery, with its huge central gompa, is also one hour away from Junbesi.

What’s more, it’s highly recommended you visit this village around mid-October and mid-November because that’s when the festival of Manirimdu in Chiwang Monastery tends to take place. This is a major festival for the locals and it also provides an opportunity for everyone to gather and celebrate together. The public festival lasts for multiple days with 24-hour pujas and traditional dances.

In fact, Manirimdu is a re-creation of legendary events; the establishment of Buddhism in Tibet by the great saint, Guru Rinpoche (Padmasambhava). Through the dance, spectators are treated to a reenactment of positive forces clashing with those of chaos, symbolic demons are conquered, dispelled, or converted to Dharma Protectors, as the celebration continues. The dances convey Buddhist teachings on many levels – and are always a treat for visitors looking to understand and enjoy the culture of the region.

Illam is obviously synonymous with its tea gardens. Many choose to take the infamous windy roads up to this Far Eastern region in Nepal solely for it. However, even after you have had your picnic over at one of the famous tea plantations of Kanyam or Fikkal and taken photographs with the dokos on your head at the chiya bari, you might not want to pack up just yet.

Illam is especially recommended for those desperately seeking some peace and quiet, away from the city noise and daily grind, such are the lush, rolling hills of Illam. Not only is greenery all over the hills of Illam all around the year, there are many areas where vehicle accessibility is limited, thus you shall not be disturbed. Doctors even tend to suggest a visit to those recovering from illnesses. Illam can really do wonders to an exhausted soul.

Further many, for some reason, seem to be unaware of this but there are many places for hiking in Illam as well. One of the famous ones happens to be Antu Danda. It is situated at an altitude of 1677m in Illam district. It is famous for its unique views of Everest and Kanchanjunga. It is the best point for viewing sunrises and sunsets as well. There is also another motorable road from Illam to Chhipitar .This trekking along green hills takes three hours.

Then, there is the option of Chhintapu. It is the second highest peak in Illam district. The area has rich forests of Rhododendron, medicinal plants and various species of birds. Experts say you can find about 11 types of Rhododendron in this area. Yarcha gumba and rare animals like red panda and musk deer can also be seen here. The peak can be easily conquered by trekking for four hours from Illam Bazaar.

Lamjung is associated with some of the most commercial tourist activities available in our country. With trekking routes such as the Thorang la Pass, celebrations such as the Tamu cultural festival in December, it is already considered a busy tourist destination. However, there is one underrated way to further enrich your experience of the beautiful scenery and the cultural exchange of the place: honey hunting. You don’t exactly have to fight the bees here, you can simply observe (from a safe distance) as the villagers keep their ancestral traditions alive.

Honey hunting is the real and frequent activity of indigenous Gurung and Magar Community in Bhujung and Pasgaon. This ancestral job of honey hunting still continues in many remote villages of Nepal and a large section of foreign travelers are increasingly showing their interest in the activity.

The locals celebrate honey hunting as a festival by offering flowers, grains and sheep to the God before hunting. Honey hunting can be taken as a very old tradition. In the past, people used to organize religious ceremonies before collecting honey to protect themselves from the attack of honeybees and any bad incidents. The worship is organized also to respect the hard work of honeybees and their contribution to the survival of human beings.

Watching the honey hunters at work certainly makes for a thrilling experience. It is undertaken by experienced villagers who hang from cliffs as tall as 300m with the help of homemade ropes and bamboo ladders. The lead honey hunter collects honey in the bucket from the beehives and passes down to another person. Honey hunting is clearly a dangerous activity and ominously enough most of the cliffs are named and remembered by the names of honey hunters who died during honey harvesting.

This not only makes for an amazing chance to experience culture but the trekking routes to and from the honey bee hives also offer breathtaking views of the landscapes. Often the activities take place around Spring and Autumn season. Since this has already gained traction among foreign tourists, the places are easily accessible and there are also plenty of accommodation options.

MUGU, Jan 11: Unable to bear the extreme weather in the northern hemisphere during this winter, different species of birds have... Read More...

Devi Gyawali has continued to grab media headlines ever since the main opposition UML fielded him as its mayoral candidate... Read More...

RPP in favor of fully proportional elections
18 hours ago