Tihar: The festival of lights 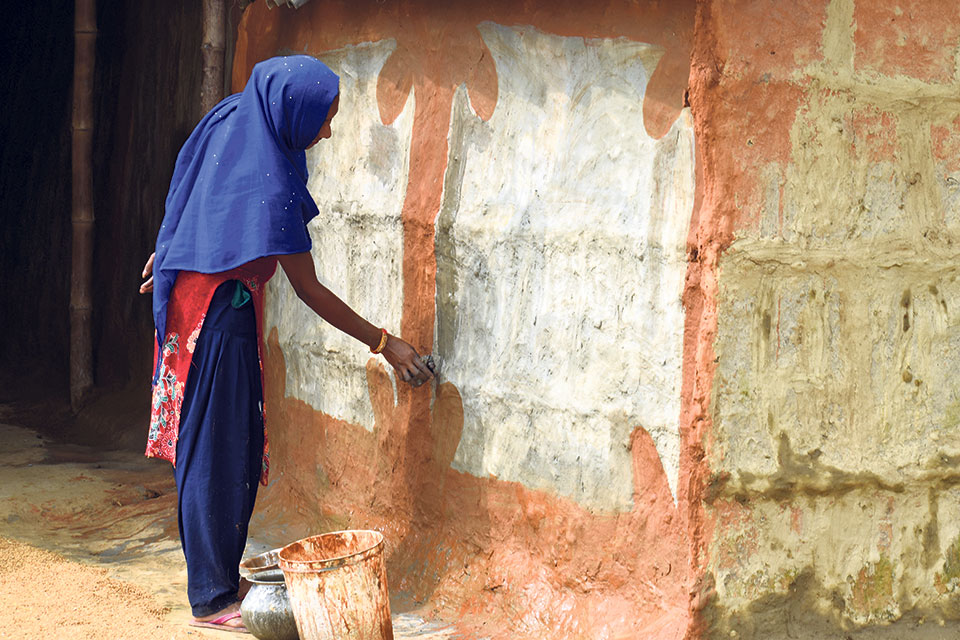 A woman in Lahan daubs her house with red mud as part of preparation for the Tihar festival in this recent picture. Photo: Mithilesh Yadav/Republica

LAHAN, Oct 24: With the festival of lights nearing, houses in rural areas of Madhes are becoming more colorful. To celebrate the festival, residents have started to paint their houses. Along with that, hustle bustle in local markets have increased and shops have piled commodities specific to the festival like lamps, candles, sweets, among others.

“In Madhesh, the festival of Tihar is considered more special than Dashain. We start preparing for it around two weeks prior to the festival,” said Sunita Yadav of Lahan. “We paint our house and decorate it with lamps and candles. So it takes time to decorate the house for the festival,” she added.

House paintings in the region reflect Mithila culture, wherein houses are painted with Mithila arts. The images of the Hindu gods and goddesses – Ram, Krishna, Ganesh and similarly that of Laxmi, Saraswati etc are painted on the walls. And these paintings last for months on the house wall.

According to Sunita, children in the villages learn to paint such images right from their childhood. It needs no professional teaching or learning, but everyone learns it as a part of their culture. However, girls and women are generally more skilled in this area.

“I also learnt it while I was a little girl. I learnt it from the elders of my family. Though boys also know how to decorate house or make such arts, it is basically daughters or women who actually participate in such beautifications,” she said.

Although several types of anecdotes are popular, Madhesi communities largely believe that Tihar or Deepawali is a celebration of Ram’s victory over Rawana. The two mythological characters are very popular among the followers of Hinduism.

While Ram symbolizes good energy, Rawana symbolizes the evil power. After Ram killed Rawana in a battle and got back home, he was given a very warm welcome by the people of Aayodhya. Deepawali is the continuation of the same celebration, according to people.

“Such stories or mythologies greatly impact our thinking pattern, our psychology. As we revere our gods and goddesses we derive similar energy,” Sunita stated.

Sunita has already daubed inside and outside the house with special color for Tihar. Similarly, she has done all the necessary shopping. She has brought home clay lamps, flowers and other decorative materials for the festival.

“Now I am planning my rangoli. Every year, we draw rangoli during Tihar, we try to come up with more creative designs,” Sunita said. “From a week before of Tihar, we stop eating non-vegetarian food, take extra care of cleanliness and hygiene, and ready ourselves to welcome the Goddesses Laxmi,” she added.

Most of the people in Madhes are still dependent on agriculture. They have cows and other livestock. During Tihar, cows are given special attention. According to Sunita, she uses only cow ghee for special Puja during the festival.

“Like many others across the country we also worship cows during Tihar. And similarly, we use fresh and pure ghee for the purpose of puja or for the lighting the clay lamps,” she said. “I use cow ghee for this festival,” she added.

According to cultural expert Devendra Mishra, different communities in the Madhes celebrate Deepawali differently. However, the connection with the lights and decorations are common among all of them.

“The Mithila culture is very vast. Even in a small region, there are different communities who have different backgrounds and histories. But Tihar is a festival of everyone, everyone love the lights, colors, decorations and celebrate this festival with a great fanfare,” he said.

Punam Devi Mahato of Dhangadimai Municipality–12 stated that she cannot compromise with the rituals followed in Tihar – even the mud used for daubing her house. To collect a special mud used in the ritual, she said that she walked a long distance. “I walked for three hours to get the mud. Without it, how would I color my house?” she said.

Madar Baba Festival in the offing

NAWALPARASI, Feb 7: The annual Madar Baba Festival celebrated by the Muslim community will be held from February 16 to... Read More...

KATHMANDU, Nov. 4: The Chhath festival observed as common cultural symbol of the Tarai is being celebrated as per religious... Read More...

Kathmandu, Aug 19: The traditional festival of Gaijatra or the 'cow festival' is being observed from today in the three... Read More...