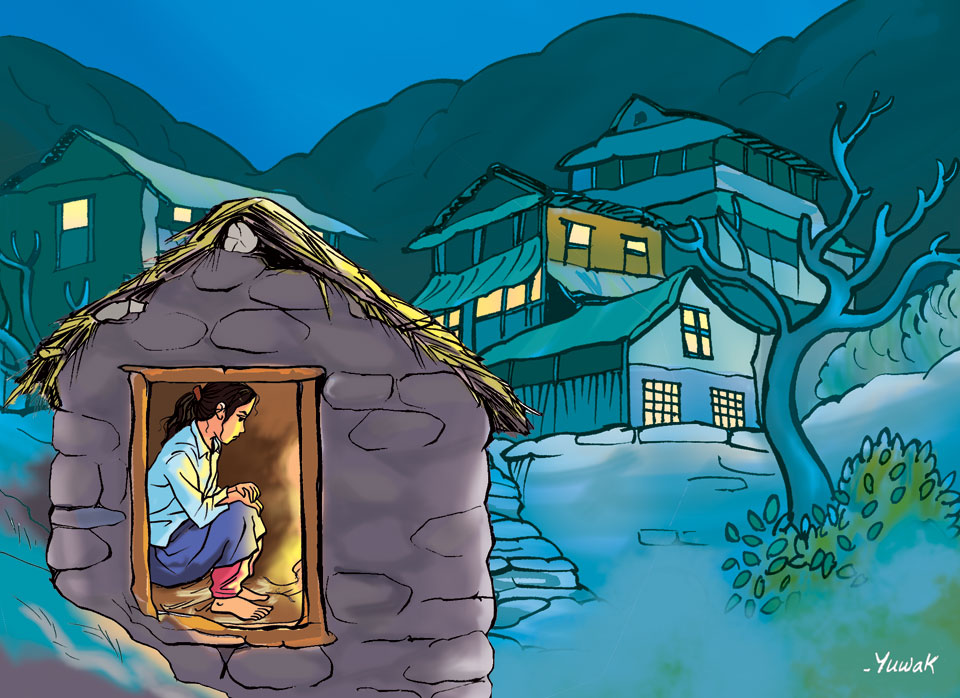 Though the tradition of chhaupadi, a practice that prohibits women from participating in regular activities during menstruation as they are considered impure, has received much criticism and even been condemned by health experts, it is still largely prevalent in many parts of Nepal. Despite the many mental, physical, and psychological ramifications of the tradition and repeated campaigns to do away with it, chhaupadi still seems to have a strong hold in our societies. How does the chhaupadi tradition affect our women and communities and why does it still thrive? Arun Bam reports.

The tradition of not letting menstruating girls enter the kitchen, or the prayer room and eating separately than the rest of the family has been a part of our society for so long that, many girls confess, it almost feels normal and like the right thing to do. But in the far- and mid-western regions of Nepal, this tradition goes a step further because here the myths and beliefs regarding menstruation are aplenty. People even believe that if a menstruating girl touches a plant, it will die. It’s also common for girls to miss school for five days a month. Often girls and women have to stay in dark, dingy sheds away from everybody, when they are menstruating. The belief that a girl is ‘untouchable’ when she’s menstruating is what keeps the chhaupadi tradition alive even today, despite numerous efforts and campaigns to do away with it altogether.

Just a week ago, 18-year-old Tulsi Shahi of Brindabasini VDC in Dailekh got bitten by a snake and died when she was staying in a chhaupadi shed with other menstruating girls. Two months prior to this incident, 14-year-old Lalsara BK of the same village had also succumbed to a similar fate.

In Achham, 26-year-old Dambara Upadhyay died of suffocation during her time in a chhaupadi shed. She was found bent over, with blood running down her nose. This incident had managed to shake the nation and shed light on the practice of chhaupadi in different places. The then prime minister Puspa Kamal Dahal had also made a statement saying he was concerned about the chhaupadi situation. In Achham, these kinds of incidents are fairly common occurrences. In the past nine years, eight girls have lost their lives while following the chhaupadi tradition.

This tradition puts women in vulnerable situations. Many women confess to feeling extremely scared and anxious. “For those who are scared to walk alone in the afternoons, staying all alone in cold, dark spaces for five days every month is a nightmare,” says Aguwa Maya Devi Kunwar, who has spent many cold nights alone in chhaupadi sheds. She says besides the threat of snakes and poisonous scorpions, she also fears wild animals and drunken men. She adds that, on top of this, the ritual to abstain from certain food deprives menstruating women of the essential nutrients required during this time of the month further worsening their condition during menstruation.

“When more than 50% of the population doesn’t work for at least five days a month, there is bound to be consequences,” says Achham based journalist Shiva Raj Khatri. Also, girls missing school when on their periods can have crucial long-term ramifications. “They will be missing classes and lessons and they won’t be getting a good education that way, which again is necessary for social and economic development of any nation,” he adds.

People believe that a woman being untouchable during menstruation was declared by the Gods themselves and that is why it shouldn’t be taken lightly. They fear they will have to face God’s wrath otherwise, and so they have to act within the limits set by our culture.
On Baisakh 19, 2062 BS, the Supreme Court of Nepal had declared chhaupadi to be a bad tradition. In 2064 BS, the government even issued a directive to bring an end to chhaupadi. Article 37, sub-article 3 in the constitution has also forbidden such activities in the name of tradition. But despite having these laws in place, it is people’s belief in god and their fear that allow the chhaupadi tradition to thrive.

“Even educated people believe in God beyond the limit of logic and reasoning,” says development officer Sabina Shrestha, of the Women and Children Office in Doti, adding that unless the fear of God goes away, the tradition of chhaupadi will continue.

Development officer Aryal of Achham agrees with Shrestha and says that it is this very reason why people in Achham too can’t seem to do away with the chhaupadi tradition. “Some people even go on pilgrimages to ask for forgiveness for stepping inside their homes while on their periods,” she adds.

When the campaign to end chhaupadi tradition was announced in Achham, Manisha Bada of Timilsen VDC destroyed the shed she used to stay in while menstruating and started living at home instead. But after staying at home for a few days, she started feeling uneasy after which she reconstructed a temporary shed and moved there.

“My in-laws told me that our Gods wouldn’t be pleased by this decision to stay in the house while menstruating but I had been adamant to put an end to the tradition,” she says adding that she felt compelled to move back into a chhaupadi shed after she herself felt disturbed by not practicing the tradition. Many girls in Achham, like Bada, have now gone back to staying in chhaupadi sheds during their time of the month.

In many places where the chhaupadi tradition is rampant, government and non-government organizations have time and again run anti-chhaupadi campaigns. These campaigns destroy the chhaupadi sheds and encourage girls to stay at home during their periods. But as chhaupadi sheds go down in an area, new ones are quickly built as replacements in another area.

However, out of the 75 VDCs in Achham, 31 VDCs were declared free from chhaupadi sheds. Similarly, many VDCs in Doti, Dadeldhura, and Baitadi districts were also said to be free from chhaupadi sheds. But the situation at these places remains almost the same. “Unless you can change the mindset of these people, destroying the sheds won’t solve the problem,” says Bhagwati Aryal, development officer at the Women and Children Office in Achham. “Even those who had started staying at home have gone back to living in the sheds during their menstruation cycle,” she adds.

Besides these campaigns, many projects from non-government sectors have spent millions of rupees to put an end to the chhaupadi tradition but the funds have just gone to waste with girls and women choosing to rebuild sheds and return to them.

Hope on the horizon

The awareness programs carried out by various organizations in efforts to abolish chhaupadi continues to prove to be crucial. Many girls and women from different parts of our country attest to the fact.

Bindu Upadhyay of Tikhatar VDC in Doti, for instance, is incredibly thankful to simply be able to sleep in the comforts of her own room and eat as she wants to while on her periods. But Upadhyay still remembers the overwhelming anxiety she used to feel every month.

“When I was forced to sleep outside in the shed, I used to have sleepless nights. My diet at the time also used to be only rice and salt,” she shares, adding that now those worries are a thing of the past.

In Durgamandu VDC in Doti, Devi Shahi also confirms that she and other girls of her area don’t have to miss classes at school anymore. Unlike before, when she wasn’t even allowed to touch her books while menstruating, she can now focus on her studies.

Initially, she says she was told that the Gods would be angry if she attempted to study while on her periods but these misconceptions no longer shadow the girls of Durgamandu.

It’s not only the youths either but these awareness campaigns have managed to change the mindsets of some from the older generation as well. Tikhani Jamuna Khada from Dipayal Silgadi is one example. She has found support in the form of her 60-year-old mother-in-law as well. These days she says women of her house can enter the kitchen as per their wish despite the time of the month.

CHITWAN, Sept 15: The 6th national lakhe dance competition is to be held in Narayangadh on coming September 19 and 20. Read More...

China for friendly ties between Nepal and India

KATHMANDU, March 30: Brushing asides speculations that China wants Nepal to be fully tilted toward it, China has said that it... Read More...