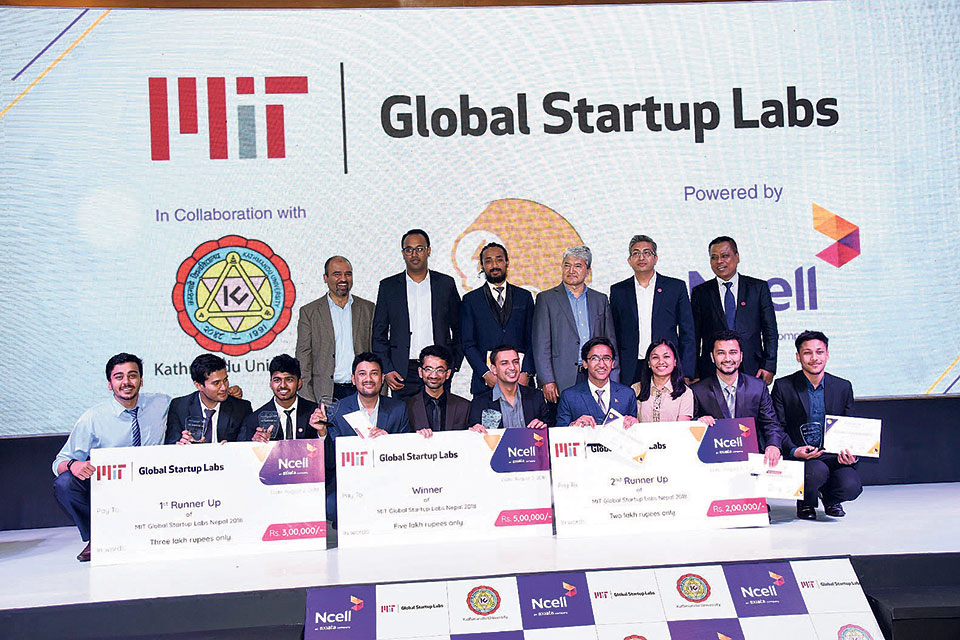 KATHMANDU, Aug 4: Three out of total nine start-up ideas have been awarded with an opportunity to participate in the Micro Master Course (MMC), an online course of Massachusetts Institute of Technology (MIT), along with cash prizes.

The three -- Sajilo Marmat Sewa, Kinder, and Opus -- also received a seed fund of Rs 500,000, Rs 300,000 and Rs 200,000 respectively on Thursday from Ncell, one of the organizers of the program along with MIT Global Start-up Labs and Kathmandu University.

Likewise, they have also been rewarded with space and mentorship facilities at Kathmandu University School of Management (KUSOM) Incubation Center.

Members of other teams have also been awarded with an opportunity to receive a certificate course from MIT through EdX, an online teaching platform.

Nine prospective start-up teams of Nepali students had pitched their ideas and business plans to a panel of judges at the end of a seven week-long innovation bootcamp in Kathmandu Thursday. They had also showcased their innovations and demonstrated public speaking skills to inspire start-up culture in Nepal. The program, called MIT Global Start-up Labs Nepal 2018, was organized to develop collaboration for best practices in entrepreneurship and technology education in Nepal.

The program was conducted for the first time in Nepal by MIT in collaboration with Kathmandu University (KU) and Ncell, with participation of 35 students from KU who formed 9 teams to work on their respective start-up ideas. The teams were mentored by 4 MIT instructors.

The participating students were chosen from among 150 students and alumni of KU. The panel of judges at the Demo Day comprised of Atulya Pandey (COO and co-founder of Pagevamp.com), Aayushi KC (founder and CEO of Khalisisi), Nikita Acharya (co-founder and CEO of Urban Girl, UG Cakes, and UG Chocolates), and Himal Karmacharya (founder and president of Leapfrog Technology).

Karmacharya, an MIT Alum of 2001, said: "It has always been our dream to have MIT involved in Nepal. I am excited about all the start-up ideas and the teams. They came very far in the 7-week-long MIT program. As I observed them as a judge, I saw a clear impact of the 24 steps of disciplined entrepreneurship developed at MIT. The next step really is to promote cross-learning by having MIT interns in Nepal."

Many people feel that they need to have their whole lives planned out before graduation. That’s a lot of pressure... Read More...

KATHMANDU, Nov 11: Grande International Hospital (GIH) has been awarded as the 'Best Hospital of the Year' by Frost and Sullivan... Read More...