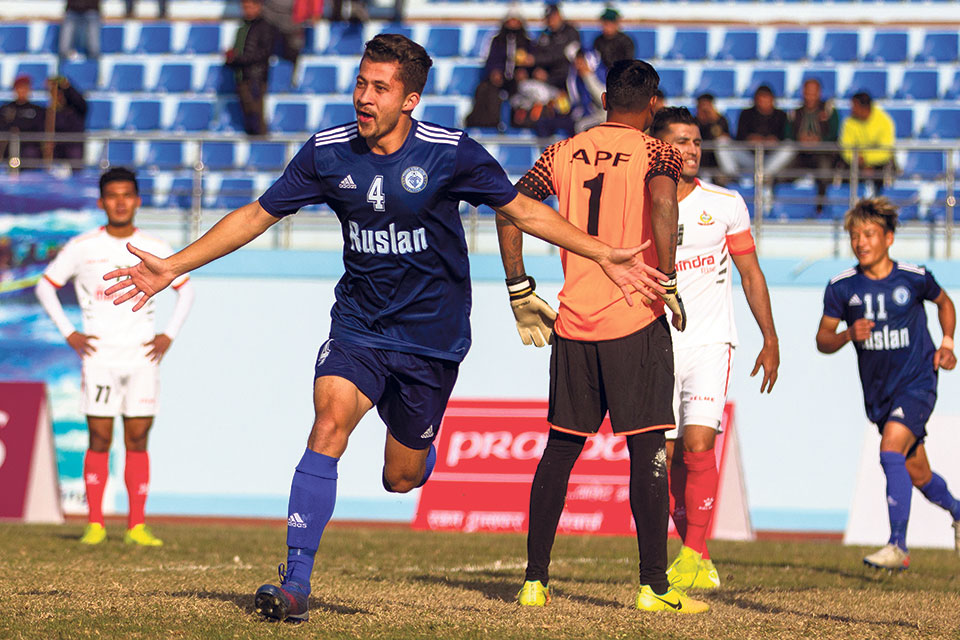 In the last match of the third round of the league campaign, Three Star center back Ananta Tamang scored the only goal of the game as the contender propeled the departmental team to its second defeat of the season. With the loss, APF is winless in the league with two losses and a draw.

“I could feel the players’ fearing the reputation Three Star has in Nepali football. The confidence of the players was seemingly down looking at the foreign players they had,” Tamang said.

However, the game was dull as far as a clinical performance is concerned. Both the teams were not creative and lacked composure in the final third as the forwards kept missing open goalscoring chances.

Three Star was authorative from the first whistle as it stamped its intent early on in the game with attacking football.

Sushil Rai gave a good cross looking for Dipesh Ghale, but the midfielder’s header was punched away to safety by APF goalkeeper Amrit Kumar Chaudhary in the third minute.

APF quickly turned defense into attack in the 11th minute as it got a good chance to take a lead. Nabin Lama dribbled past the defender, but could not take a shot as captain Bikram Lama closed him down quickly.

It was a superb performance from the Three Star backline as the duo of Lama and Ananta Tamang did not let APF work through the spaces. Lama again started as a center back for the team partnering Tamang.

Three Star finally took the lead after all the attacks in the 15th minute as Tamang brilliantly guided the ball into the net with a stunning header coming from a Ghale free-kick.

The Three Star fullbacks were sluggish yet again allowing a lot of possession back to APF, and were not creative in the final third as well. Sushan Shrestha could not head a ball from a Prabin Sainju cross in the 26th minute.

The winning team, however, could not keep on dominating the game as APF was quick on counters and utilized a lot of mispasses to carry the ball forward. But, it could not take advantage as the players were closed down quickly and the ball was retained by Three Star.

Ghale nearly scored a goal on his own in the 36th minute as he dribbled past two defenders, got inside of the defendse line and hit a shot. But, the ball hit the top crossbar.

Three Star started the second half as it ended a first with a lot of chances, but too little to show for in the final third. The story was pretty much the same in APF’s context, but it started on attacking mode getting balls into the box, but failed to score.

Both the teams were finding it difficult to break the opponent’s defense line. Both defended with a compact shape in the middle part of the field. APF tried to get in with crosses inside the box, but Three Star could not do so since the pressing was accurate from the departmental team.

Lama got a chance for himself as he was deployed as the defensive midfielder in the second period with first half substitute Jeevan Gurung playing as a center back. Lama hit a shot from outside the box in the 74th minute, but the ball was brilliantly saved by a diving Chaudhary.

Sushil Rai got a good chance to double the lead in the 83rd minute as he was given a pass by Sushant Shrestha after Sainju gave a brilliant throughball to the forward. But, the chance went off the target.

Mikchhen Tamang, who is a nationa team regular now, got a chance to score from the free-kick in the 85th minute, but the ball hit the top crossbar and went out.

Tamang, who was introduced to league football by head coach Megh Raj KC, was a pivotal part of Nepal’s gold winning campaign at the 13th South Asian Games (SAG) as he scored a stunning free-kick against Bhutan.  Still to concede, Three Star, who has seven points, has climbed up to the second position with two wins and a draw. APF has just one point after a draw and two losses and is lingering on the 12th place.

After the match, APF coach Tamang further added, “The league is not done as there are still 10 matches left for us to recover. We lost our first two last season against Manang and Three Star, but we recovered quite well.”

“The score did not come as we expected since our striking line played poor. We will improve that. We performed the same way we did in our last two games. We are trusting on young and new players this season,” KC said. “The players are talented, but have not been able to give their 100%. We missed some players as well as both our central midfielders were injured.”

“Some might find that Three Star has not been performing their usual game this season. But, I feel we are better than the past seasons.”