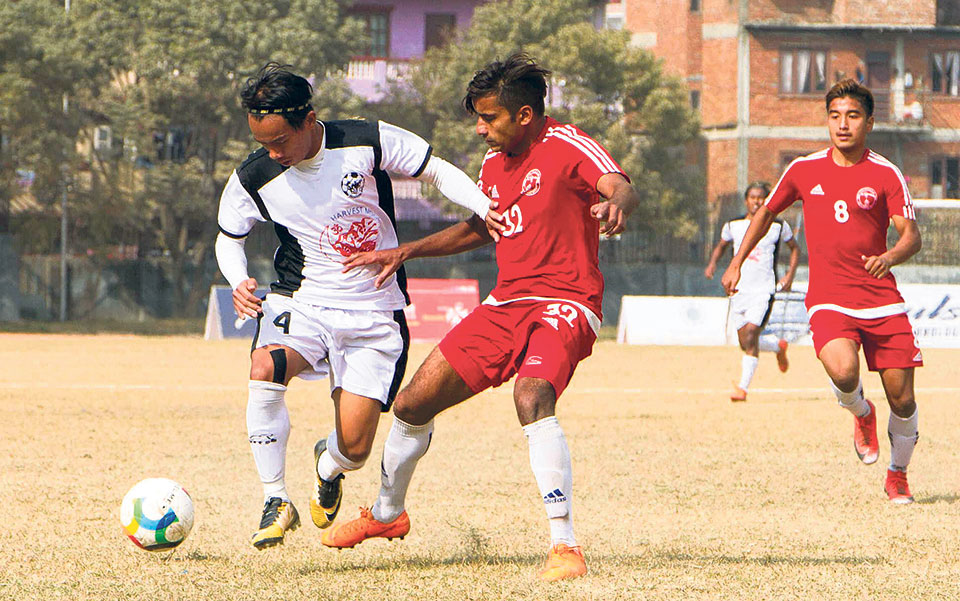 KATHMANDU, Dec 9: A late goal from Ellon Maxwell helped Sankata Club go joint-top registering its sixth win of the tournament with a slender 1-0 victory over struggler New Road Team in the ongoing Martyr’s Memorial A-Division League at Halchowk in Kathmandu on Saturday.

At the Armed Police Force (APF)’s Stadium, Sankata had created other chances to score as well, but could not capitalize. It scored only in the third minute of the five added minutes at the end of the game.

Cedric Aba passed the ball to Subhash Gurung in the 20th minute, but his strong shot went wide hitting the outside of the post.

Sankata had nearly taken the lead in the 41st minute after Gurung put a free-kick in the box, but Ravi Silwal’s header which went inside the post was flagged for offside.

Then, Maxwell scored in the third minute of the added time to seal the winner for Sankata.

In the other game played earlier on the same day, the departmental team Nepal Police Club and Himalayan Sherpa Club shared the spoils of a 1-1 draw.

Police failed to win the game after failing to hold on the ball for the last 20 minutes.  Police had taken the lead through Bharat Shah in the 31st minute after the Himalayan defense left the ball for offside, Tej Tamang passed the ball to Shah, who scored for the team.

Himalayan dominated the game fully from the start, also created the chances, but as its final third was missing and could not score. It missed a glorious chance when Tridev Gurung crossed the ball inside the box and Patrick Goha failed to score from the area in the 17th minute.

Police also created some chances as captain Bhola Silwal could not finish from the penalty box in the 27th minute.

Himalayan, who dominated the game and created a firm hold in it, could not score in the first half injury time.

Goha passed the ball to Bishwas Shrestha, but his shot from near the goalpost went over the bar in the 31st minute.

Police, who took the lead in the first half, could not present a balanced performance in the second period.

Shrestha equalized in the 70th minute to give a point to Himalayan after Rabi Magar hit a corner. Police keeper Arpan Karki failed to hold the ball and Shrestha, quite cleverly, put the ball into the back of the net.

Himalayan then kept on pursuing for the winning goal in the remaining time by playing counter attack, but could not score any more goals.

Police head coach Ananta Thapa said that his team had to share a point with Himalayan.

"The team could not present a balanced performance and the lack of coordination was clearly seen in the game.

We lacked the ability to judge the game of the opponent team full of young players," Thapa said. "This league is proving out to be a lesson for the players. The league next season will be a good experience for the young team and we are hopeful we will do well."

Himalayan Sherpa head coach Subhash Limbu said that even though his side came for the win, the tactics for the game were unsuccessful.

"Police has good wingers in the team, so I had made the tactics to play attacking football comprising both Nepali and foreign players," Limbu said. "We were in search of points. We were successful in getting a point at least after going a goal down."

Police has 11 points from seven games and is at the fifth place, while Himalayan is a place down with the same number of points. 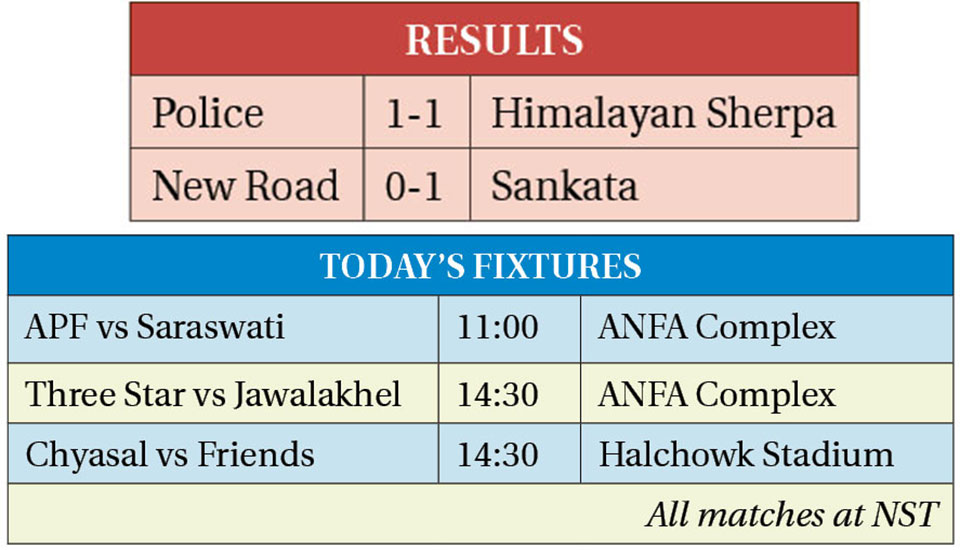 KATHMANDU, Dec 5: Sankata Club has climbed up to the second place continuing its rich vein of form as it... Read More...