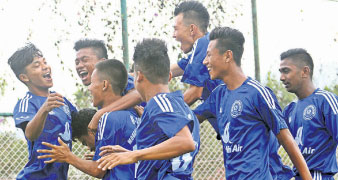 KATHMANDU, June 17: Ruslan Three Star Club crashed out of the Lalit Memorial U-18 Football Tournament facing 2-1 defeat at the hand of Sudur Biscuits Far-western Football Club at the ANFA Complex, Satdobato on Friday.

Three Star had faced 3-2 defeat against CMG Club Sankata in the opener of Group C that comprises of three teams. Sankata also entered into the last eight with the result.

The win saw Far-western book its place in the quarterfinal from its first match of the tournament.

Jeevan Chaudhary and Kamal Deuba scored a goal each for Far-western, while Susan Shrestha scored the only goal for Three Star.

Sachin Raj Basnet scored the opening goal for Morang; however Kshitiz Khadka of Saraswati leveled the score in 31st minute.

Morang again took lead when Bidur Rijal netted in the 65th minute, but Kshitiz again leveled the score with his goal in 80th minute.

Meanwhile, Nepal Police Club secured its place in the last eight with the result as it had recorded 5-3 win over Saraswati in the opener.

KATHMANDU, Aug 22: National League champion Ruslan Three Star Club, which is just a step away from making it to... Read More...

No one from Afghanistan will address world leaders at U.N.
22 minutes ago