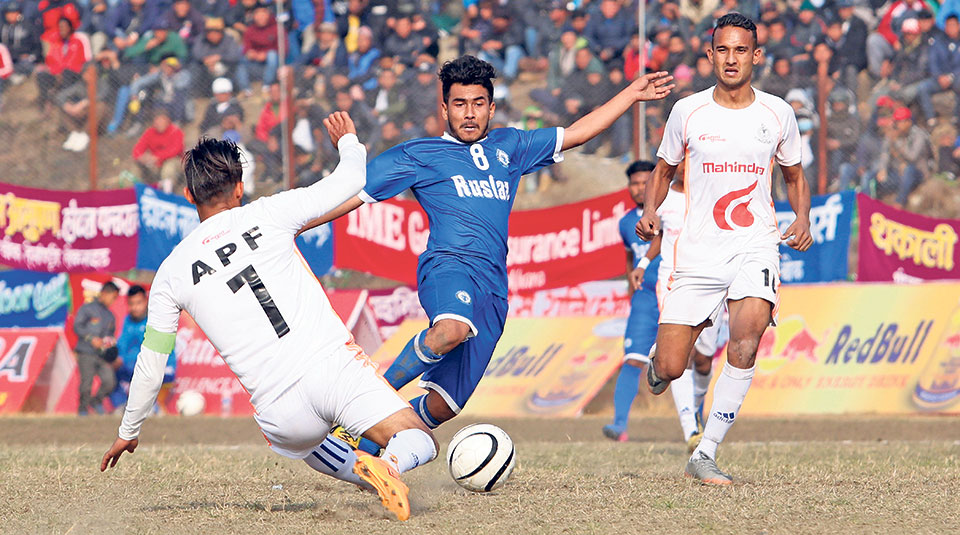 Photo: Umesh Pun / Players of Three Star Club (blue) and Armed Police Force in action during a quarterfinal match of the 16th Aaha Rara Gold Cup football tournament at the Pokhara Stadium in Pokhara on Monday.

The four-time champion TSC, which also lifted the Itahari Gold Cup title on January 27, saw off APF 5-3 in the tie breaker.

The quarterfinal match, played at the Pokhara Stadium, was pushed to penalties after the two sides were locked at 0-0 even at the end of the extra time.

Nabin Lama, Anjan Bista and Ranjan Bista scored for the APF. But, Rajendra Rawal’s miss from the spot cost the departmental side a place in the semis.

APF failed to convert a series of good chances into goal throughout the match. Top Bahadur Bista’s 30th minute shot from 40-yard was brilliantly saved by the TSC goalkeeper, while Yuvraj Khadka could not score failing to utilize Sudeep Sirakhar’s pass in the 54th minute. Likewise, Aaditya Chaudhary was unable to convert a free kick in the 56th minute.

APF head coach Ratna Kaji Maharjan said that they lost the match because of the lack of coordination between the players.

“The players played under pressure,’’ Maharjan said, “We played well in the second half, but unfortunately, could not score.’’

He added that it’s always difficult to create good chances to score against a top side.

TSC also missed several chances during the match among which Bal’s 12th minute strike hit the crossbar and Jeevan Gurung could not direct the ball goalwards with his head. Gurung also threw away another chance in the 85th minute, which could have been a decider. But the shot was punched away by the goalkeeper.

TSC head coach Megh Raj KC said that the match was pushed into the tiebreaker because they could not field their full team and play with their full strength. He also added that his players could not get proper rest having traveled straight from Itahari.

“The players will play well in the next match,’’ KC said, “This match was not like Three Star’s, we should have done better than this.’’

He informed that three foreign players will be included in the squad for the Monday’s semifinal match.