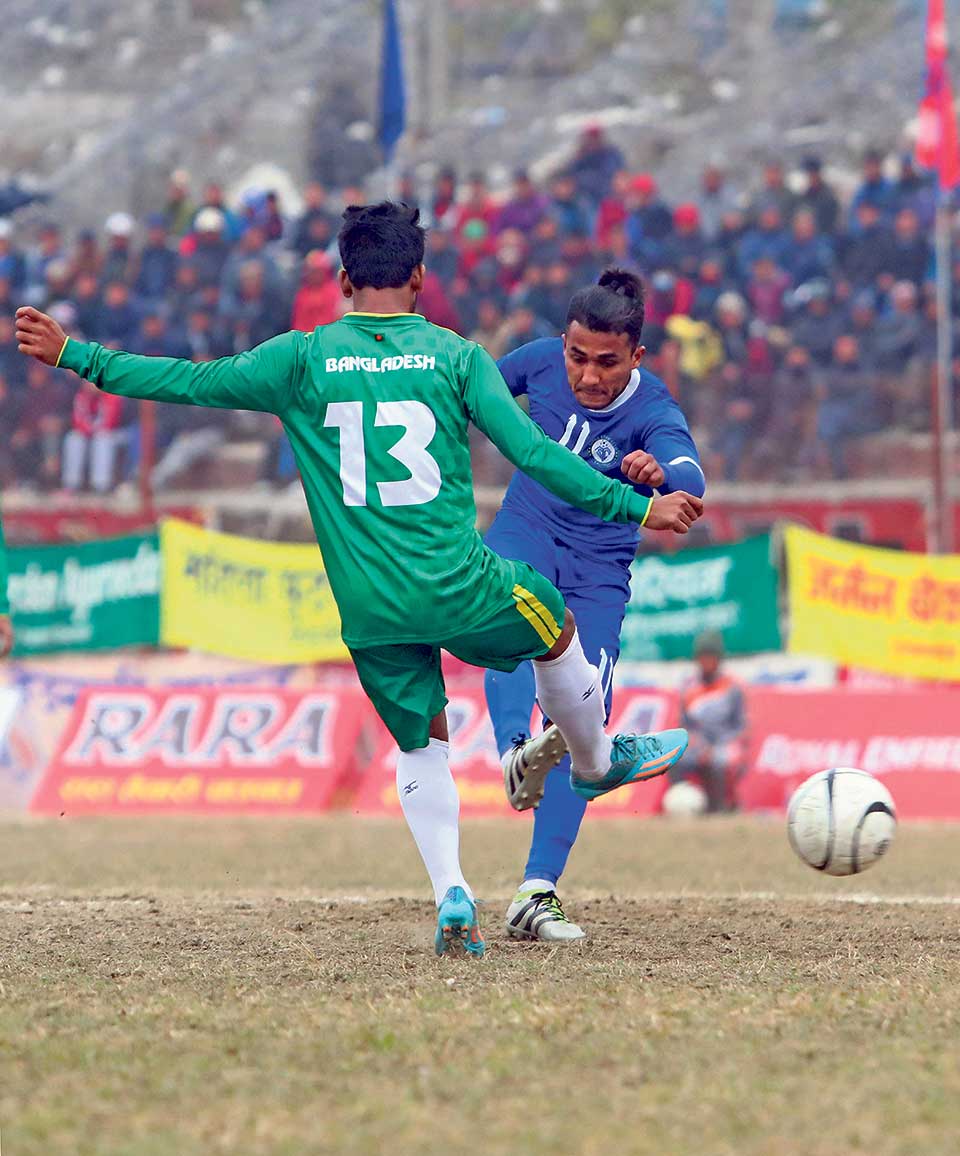 Bishwas Shrestha of Three Star Club in action against Uttar Baridhara Club of Bangladesh during a quarterfinal match of the 16th Aaha Rara Gold Cup football tournament at the Pokhara Stadium in Pokhara on Wednesday. Photo: Umesh Pun/Republica

This was the first time the Bangladeshi club, who beat Far-western XI to book its place in the last eight, took part in the tournament, while four-time champion TSC defeated the departmental team Armed Police Force (APF) to reach the quarterfinals.

At the Pokhara Stadium, TSC kept the match under control. TSC took the lead through Bishnu Gurung in the 41st minute utilizing a pass from Buddha Chemjong.

Nirajan Khadka doubled TSC’s lead scoring in the 45th minute utilizing a pass from Bishwas Shrestha. It was not over as far as the first half was concerned and Shrestha doubled his tally in the second minute of the injury time from a pass by Khadka.

Shrestha became the first player of this edition of the tournament to score a hat-trick with his 67th minute goal, again utilizing a pass from Khadka. Shrestha added more to his tally from a free kick by Sunil Bal in the 75th minute. Shrestha was declared the man-of-the-match for his contributions.

The two African players who were sent off against Far-western proved to be costly for Baridhara. Baridhara failed to hit even the target throughout the match as it played under pressure defending the match.

Baridhara’s senior vice-president Musiwar Rahawan admitted that his team lost because they failed to play with their full potential. However, he claimed they will come with good players next time.

“Three Star played very well,’’ Rahawan said. “There were no good players in our team as some good players were injured.” He added that some players failed to come with the team because of visa problem.

“Three Star has never played against such a team in the past, and it may not be the case in the semifinals,’’ KC said.

TSC will now face either the other departmental team Three Star Club (TSC) or Dharan Football Club in the last four match.

“Every opponent team is strong and we will not take any of them lightly. But we are fully prepared to face anyone, be it Police or Dharan,” KC added.