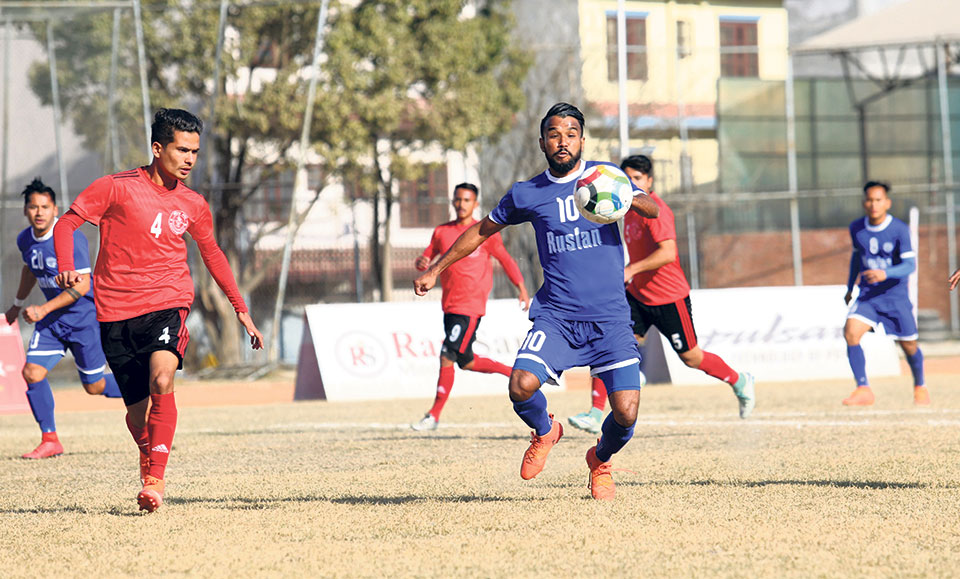 KATHMANDU, Dec 16: Three Star Club has reclaimed its second position after a slender 1-0 win over struggler Machhindra Club in the ongoing Martyr’s Memorial A-Division League in Halchowk on Saturday.

At the Halchowk Stadium of Armed Police Force (APF), the only goal from league’s highest scorer Ranjit Dhimal in the 11th minute was enough to get a win for Three Star. He scored from the penalty spot again taking his league goals tally to seven, which have all come from set pieces.

Three Star was awarded a penalty after a shot from Nirajan Khadka was handballed by Machhindra defender Saheed Obenga Anifowose. Dhimal converted the spot kick with ease and the goal went on to become the winning goal for Three Star.

Out of the seven goals he scored, five are from penalty kicks and two from free-kicks. Manang Marshyangdi Club’s Anjan Bista is behind him with five goals on second.

Despite dominating the game completely, it could not score any more goals. Some of Three Star’s good moves were brilliantly denied by Machhindra keeper Deep Karki.

Machhindra is the only team in the league so far to not have scored a single goal. It tried to score a goal in both the halves, but was unable to do so.

Tanka Prasad Gurung hit a shot from just outside the penalty box, but his strong shot went just wide of the bar in the 24th minute.

Three Star’s Ranjan Bista crossed the ball to Anil Gurung, whose header went straight into the hands of keeper Karki in the 28th minute, while Bista could not convert the corner with his head from a Sunil Bal corner in the 21st minute.

Three Star could not present an improved performance in the second half despite scoring early on in the game. It could not break the defense line of Machhindra, who has conceded nine goals in eight matches in the league.  Machhindra defenders kept on playing good defensive football in spite of continuous attack from Three Star. Macchindra then opted for defensive counter attack football, but could not still find the net.

With the win, Three Star has accumulated a total of 21 points after the end of the eighth round of fixtures, and is three points behind leader Manang. Machhindra is still winless with three draws and five defeats. It has three points without even scoring a single goal.

Likewise, in the other game played earlier on the same day, newcomer Chyasal Youth Club registered its fourth win of the season defeating Brigade Boys Club 2-0.  Chyasal scored both the goals in the second half after the first period ended goalless.

Shanta Bahadur Gurung gave Chyasal the lead in the 65th minute, while Sanjok Rai capped the win for the team as he converted a pass from Santosh Sahukhala to beat Brigade keeper.

Chyasal was limited to 10-men for the last five minutes. Sahukhala was shown the first yellow card after a bad foul in the 84th minute, and he was given the marching order immediately after he protested for the card by referee Nabindra Maharjan.

Brigade Boys tried to get the game back into the track, but could not find a goal as it missed a couple of chances failing to capitalize on the advantage.

With the win, Chyasal has climbed up to the sixth place with 13 points, while Brigade Boys has four points and is at the 12th place. 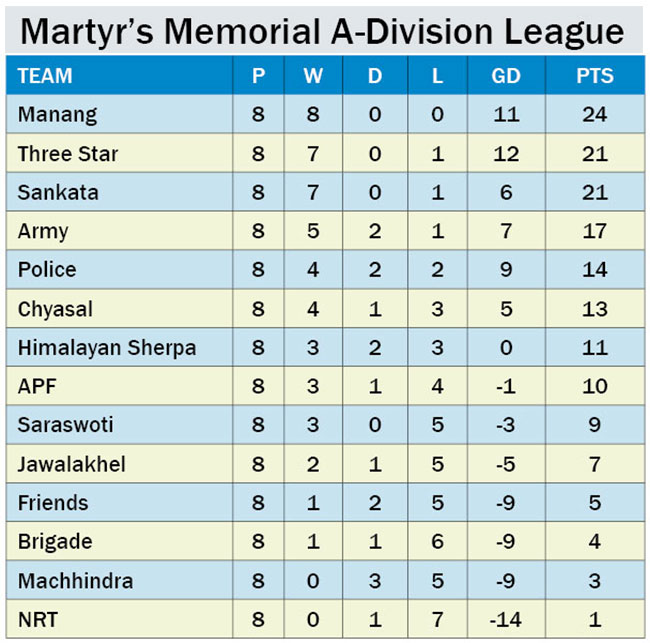 KATHMANDU, Nov 19: Title contender Ruslan Three Star Club has climbed to the top of the table with a 5-1... Read More...