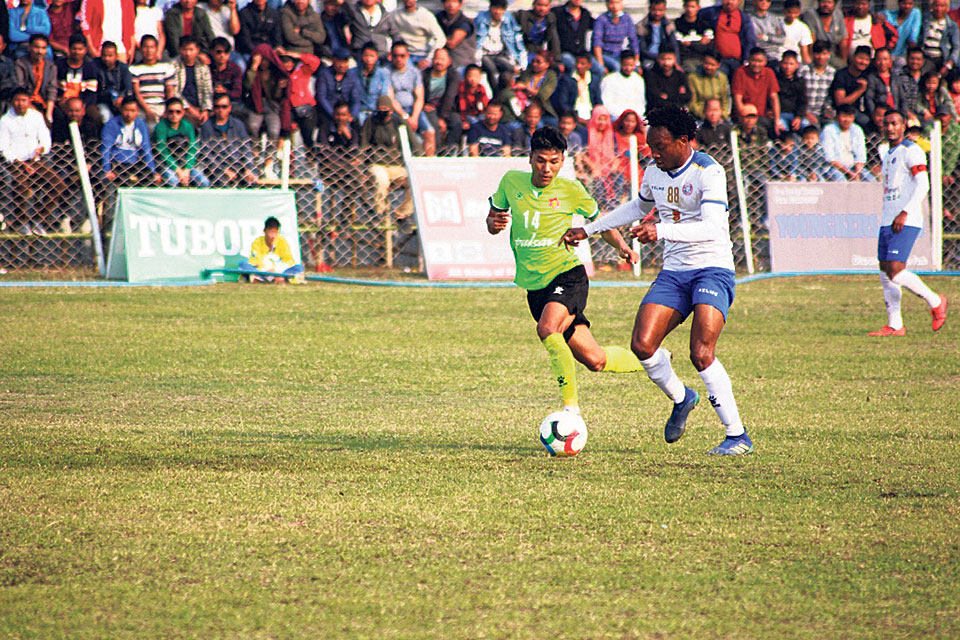 Players of Tribhuvan Army Club and Machhindra Club in action during the semifinal match of the Satashi Gold Cup football tournament in Damak, Jhapa on Friday. Photo: Yuvraj Bibas/Republica

DAMAK, Feb 22: Bikash Khawas scored an own goal yet again as A-Division League champion defeated the competition’s runner-up Tribhuvan Army Club 2-0 to advance into the final of the ongoing third Satashi Gold Cup in Damak on Friday.

After the win, it has set a summit clash with Three Star Club, which Machhindra had beaten 2-0 in the league this season.

In the second semifinal match, Machhindra dominated Army yet again and put two goals past this time around, bettering its 1-0 win in the league.

Bishal Rai ‘B’ doubled the lead in the 74th minute as his shot was not held well by the keeper and Khawas put the ball into his own net while he was trying to clear the ball.

Machhindra got other chances in the game to score, but could not convert them.

Bimal Gharti Magar hit a shot in the sixth minute from 25 yards out, but the shot was punched away to safety by Army keeper Bibas Chaudhary.

Army had a few chances too as George Prince Karki’s shot in the first minute went over the bar, while Santosh Tamang’s shot in the ninth minute was saved by goalkeeper Surya Adhikari.

Subba was named the man of the match and got rewarded with Rs 10,000.

Machhindra lifts Satakshi to win second title of the season

DAMAK, Feb 24: A-Division League champion Machhindra Club has won its second title of the season as it defeated another top... Read More...