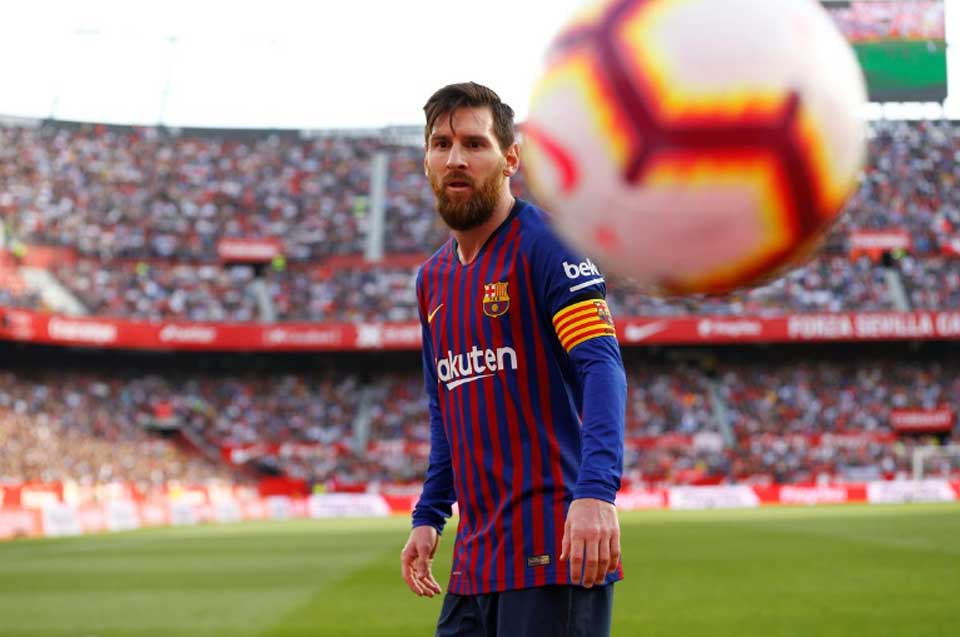 SEVILLE, Feb 24: Lionel Messi said Barcelona were back to their best following a mid-season slump after he scored a remarkable 50th career hat-trick in a rousing 4-2 win at Sevilla in La Liga on Saturday.

Barca had only won one of five games in February as they kicked off at the Sanchez Pizjuan stadium but after another landmark day, Messi pledged his side would now go all out for a ‘treble’ of La Liga, Copa del Rey and Champions League trophies.

Having been held to a goalless draw at Olympique Lyonnais in their Champions League last-16 first leg on Tuesday, Barca looked set for another disappointing result when Jesus Navas gave Sevilla the lead.

Yet Messi responded with a stunning volley and although Gabriel Mercado put Sevilla in front again before halftime, Barca’s captain again hauled his team back into the game quite brilliantly.

His thumping strike from just inside the area saw Barca equalise midway through the second half before he put them ahead with an ice-cool dinked finish in the 85th minute and then laid on the pass for Luis Suarez to seal all three points.

“Today, we were ourselves again and we produced a great performance,” Messi told reporters.

“We went through a spell where, to be honest, we did not play our best football so that made it much harder for us to score.

“You have different moments over a season, and we can’t always play at the highest level. But when we manage to get the play to flow, things always happen for us.”

Barca’s inconsistent results have not harmed their bid to successfully defend the La Liga title and the thrilling win extended their lead at the top of the table to 10 points over nearest challengers Atletico Madrid.

“There is still a long way to go in the season but it was very important to win here and keep the distance with our rivals,” added Messi, who leads the scoring charts in Spain and in Europe’s top five leagues with 25 goals.

“It’s always tough to win here, we know what it is like to come to this stadium and how good Sevilla’s players are, they made things very hard for us by taking the lead but we knew how to overcome all that.”

Barca now face back-to-back trips to arch rivals Real Madrid, with a Copa del Rey semi-final second leg on Wednesday followed by a league visit back at the Santiago Bernabeu next Saturday.

“Now we have some very difficult games coming up and everything will get harder as the season draws to a close,” Messi said.

“We won’t give up in any competition. We are one step from reaching the Cup final. That game is going to be very tough because it’s against Madrid, in their stadium.

“But we will go out to win and believe we can. Then we will focus on the league game. We’re going to try and win everything.”

Ruthless Barca thrash Sevilla but have two players sent off