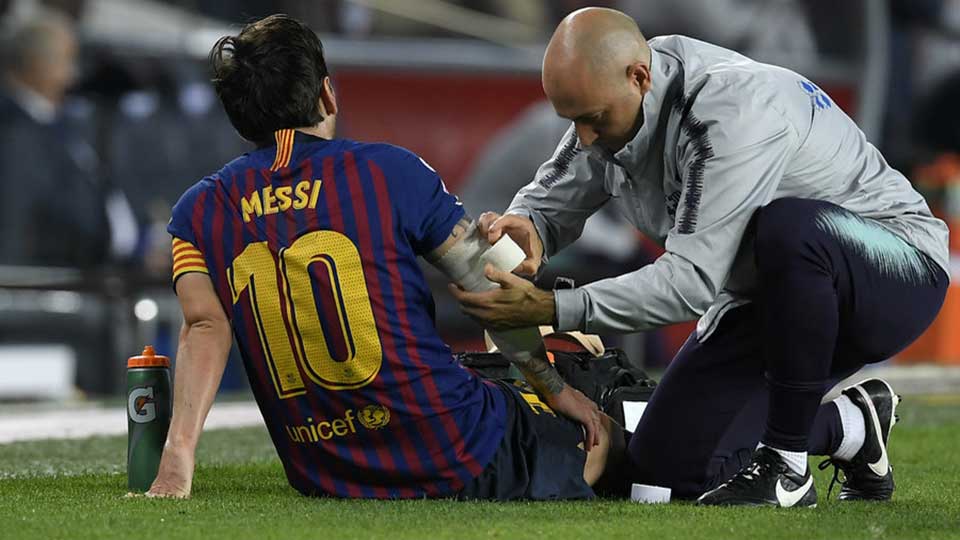 BARCELONA, Oct 22: Lionel Messi will miss Barcelona’s El Clasico showdown with Real Madrid next weekend after fracturing his arm in his team’s 4-2 La Liga win over Sevilla on Saturday.

The Barca captain has been ruled out for three weeks after suffering the injury to his right arm when landing heavily after colliding with Sevilla’s Franco Vazquez early in the first half of the two team’s La Liga clash at Camp Nou.

The Argentine – who had set up Philippe Coutinho’s opening goal after two minutes and himself added a sublime second after 12 minutes – struggled to play on before being substituted in the 26th minute.

Barcelona later confirmed that their captain had suffered a "fracture of the radial bone in his right arm," an injury which took the gloss off a 4-2 win over Sevilla which saw them leapfrog their opponents to the top of the La Liga table.

With Messi off the field, Luis Suárez added Barcelona’s third through a 63rd-minute penalty, before Pablo Sarabia pulled one back for the visitors.

While the result ended a run of four games without a league win for the Catalan club, the big talking point was Messi’s injury, which means the No. 10 will miss the Champions League clash with Inter Milan this week, before the showdown with great rivals Real at Camp Nou next Sunday.

With Cristiano Ronaldo having made the switch from Real Madrid to Juventus in the summer, next weekend's Clasico will be the first since 2007 not to feature either of the iconic duo.

Real, meanwhile, have problems of their own heading into the clash, having slipped to a fourth defeat in five games through a shock home loss to Levante on Saturday.

The result leaves Real fifth in the table on 14 points from nine games – four behind leaders Barca – and piles the pressure on coach Julen Lopetegui.

His team were 2-0 behind inside quarter of an hour on Saturday, with Jose Luis Morales opening the scoring for Levante before Roger Mart scored from the penalty spot.

Marcelo pulled one back in the second half as Real pressed desperately to end their slump, but couldn’t find a way past Oier Olazabal in the visitors’ goal.

Real will look to the Champions League to provide a much-needed confidence boost at home to Czech club Viktoria Plzen on Tuesday, before they head into the crunch clash with Barcelona.

For Lopetegui, who took over from French legend Zinedine Zidane in contentious circumstances in the summer, defeat in either of those games could precipitate an early-season departure from the Real hotseat.

NGO operators in Kathmandu deny embezzlement of UK donation meant for treatment of street dogs, claim that they are not local board of KAT UK
13 hours ago

16 DIGs including all provincial police chiefs transferred
2 hours ago