Thimi area limping back to normal after flood KATHMANDU, July 14: The Hanumante River flooded settlements in Thimi and Radhe-Radhe temple area of Bhaktapur district during a torrential downpour on Thursday, as several parts of the district got submerged in water. A team of Nepal Army as well as police personnel carried out immediate rescue operation.

However, the damage had already been done. Furniture, food products, and other essentials were completely damaged as water level reached up to four feet in some areas. According to district authorities, over 50 families were temporarily displaced as their houses were flooded.

Bhim Lal Shrestha, 40, of Thimi said on Friday that he incurred a loss of around Rs 4 million as the flood damaged the stocks in his shop. He sells lentils, beans, sesame and other food items. Most of the items stored at his shop were damaged by the rain. 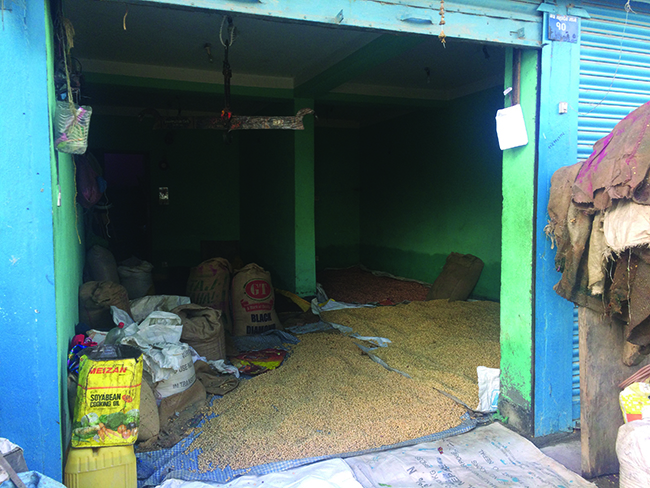 He said he plans to take loans to make up for the loss. Shrestha said that completely overcoming all the losses is impossible and hopes that the government will support people like him during this dire period. His family business which supports six is in complete ruins because of the downpour.

Sudeep Aryal, originally from Dhading, has been living in Radhe-Radhe since a year. His departmental store was completely inundated. “The water that gathered inside the departmental store, was up to a level that could drown humans,” Aryal said. He had been clearing the mess since Friday morning but was far from finished with everything scattered around by the flood water. He said he is worried if he would be able to settle his loss of a million rupees.

“We are having hope against hope,” said a dejected Aryal. According to him, officials from the municipality came in the morning seeking details of their losses but failed to provide any help.

Thirty-four-year-old Gyan Kumar Katwal, who owns an Aluminum shop in Radhe-Radhe, says that the incident was “not a flood” but an artificial making. He held the locals, who have encroached on the river banks for years, as responsible for the misfortune. By buying land at cheap prices, landowners have infringed on the river banks and river bed itself. The natural flow of Hanumante River has been obstructed by encroachers and its width has been narrowed down to only a few feet. Thursday night’s downpour was beyond the river’s capacity and so the water entered the settlements. Katwal has lost all official documents including VAT bills, insurance papers, and bank statements because of the flood.

Anita Moktan is yet another of the many victims. Originally from Ramechhap, she has been living in Bhaktapur for the past two years and said that such downpours have occurred thrice in these two years, with Thursday’s incident being the worst among all. Everything from her kitchen utensils to her sofa sets and bedrooms were submerged in water. “My couches were floating,” she said, adding, “My house has been turned topsy-turvy.” 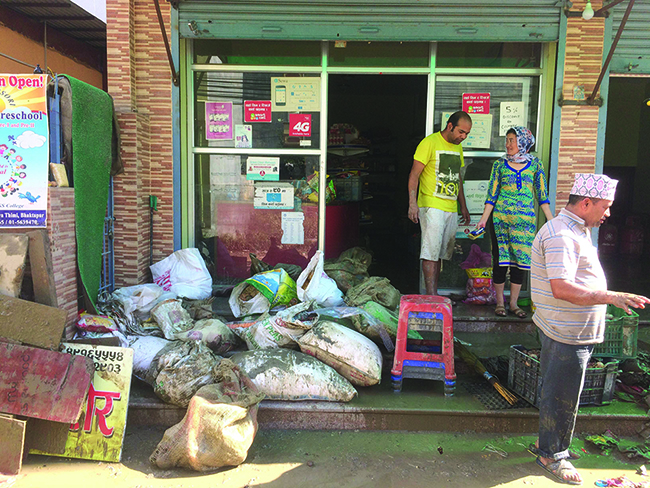 Chief District Officer of Bhaktapur, Narayan Prasad Bhatta, said that the families of the three people who lost their lives during Thursday’s incident were provided relief of Rs 300,000. However, relief hasn’t been provided to the rest of the locals who have been affected. Bhatta said that they haven’t yet received the details of losses and will act accordingly once they acquire the particulars.

KATHMANDU, May 10: Two weeks after the prime minister lashed out at concerned authorities for the delay in the reconstruction of... Read More...