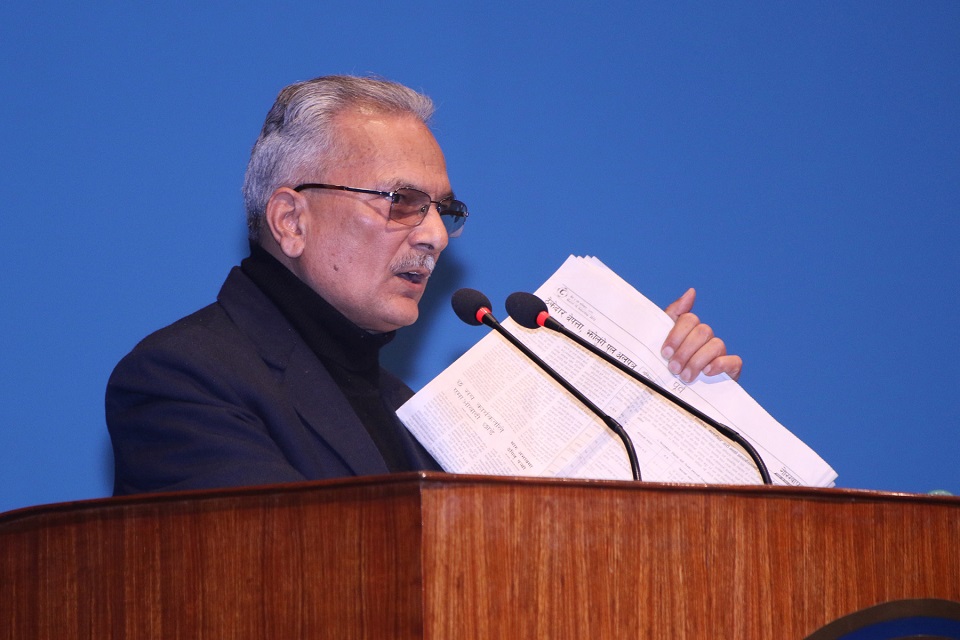 KATHMANDU, Feb 26: Socialist Party's federal council chairman and former Prime Minister, Dr. Baburam Bhattarai has made it clear that there was no ill motive in the decision made by the government under his leadership to register the land in Matatirtha, Mahadevsthan, Satungal, Ichangu among other areas.

He argued that rather the decision to register the land which was under the tenancy of the tenants for long is in favor of the landless and the real tillers and peasants. This land was in the name of the current Nepal Trust.

"Although the land distributed by then King Mahendra by making the poor peasants as the tillers as per the 'Farmais Birta' practice was later brought under Nepal Trust ownership, it did not belong to the former royal family. Hence, the then Council of Ministers made a policy decision to have that land registered in the name of the real tillers," the former Prime Minister told a session of the House of Representatives today.

It may be recalled here that Prime Minister KP Sharma Oli, while informing the House of Representatives on February 15 on the achievements made during the two years of his government, that the government has forwarded the process of reclaiming the land including in Matatirtha.

Referring to this topic, Dr. Bhattarai argued that the decision made by his government was not wrong as it was based on facts and evidence. He also made it clear that the land in reference was not like the Lalita Niwas land grab scam in which the unscrupulous land dealers have transferred the government land in the name of various individuals.

"Knowingly or unknowingly, we also decided at last. That is a separate matter. However, it (Lalita Niwas land scandal) was something committed by the land mafia and some other people, in collusion with the government and bureaucracy people, with ill-motive, a kind of looting. This is a different case. Since the latter has been brought under a process, it will be finalized," he said.

He stated that he came to know about the Lalita Niwas land encroachment issue only after some time. The former Prime Minister stressed that the Matatirtha land registration issue should not be linked with the Lalita Niwas scam, stating he was trying to make things clear as various doubts have been raised of late regarding the topic of Matatirtha land.

Stating the 'farmais birta' practice had been in existence during the time of then king Mahendra and that it was not abolished although the birta system was abolished by the state in 2016 BS, the former PM noted that the king opened the registration of such land again through a notice published in the Nepal Gazette in 2026 BS.

In this connection he quoted from the notice in the Nepal Gazette: "We have forsaken our right over the land. This land will be raikar land (the land which has been given to the tillers by the state and the tillers have to pay the land tax to the government) and let it be registered as raikar land."

He added that at that time the members of the poor families could not register the land in their name due to various reasons. Noting that things should not be judged on the basis of suspicion, he stressed the need of collective measures to banish corruption as it has been spreading like cancer in the country rather than engaging in blaming each other.

He drew the attention of the parliament that while we engage in the blame game, the real culprit might escape. The Socialist Party leader and former Prime Minister also said it was high time the property of all including his was investigated.

Referring to the topic of constitutional amendment that is being talked about at present, former PM Bhattarai said the constitution amendment was necessary for introducing the directly-elected executive presidential system and a proportional parliament.

KATHMANDU, Feb 4: Four different bills have been tabled in today's meeting of the House of Representatives. ... Read More...

Australia's tour of Bangladesh postponed due to coronavirus
17 hours ago