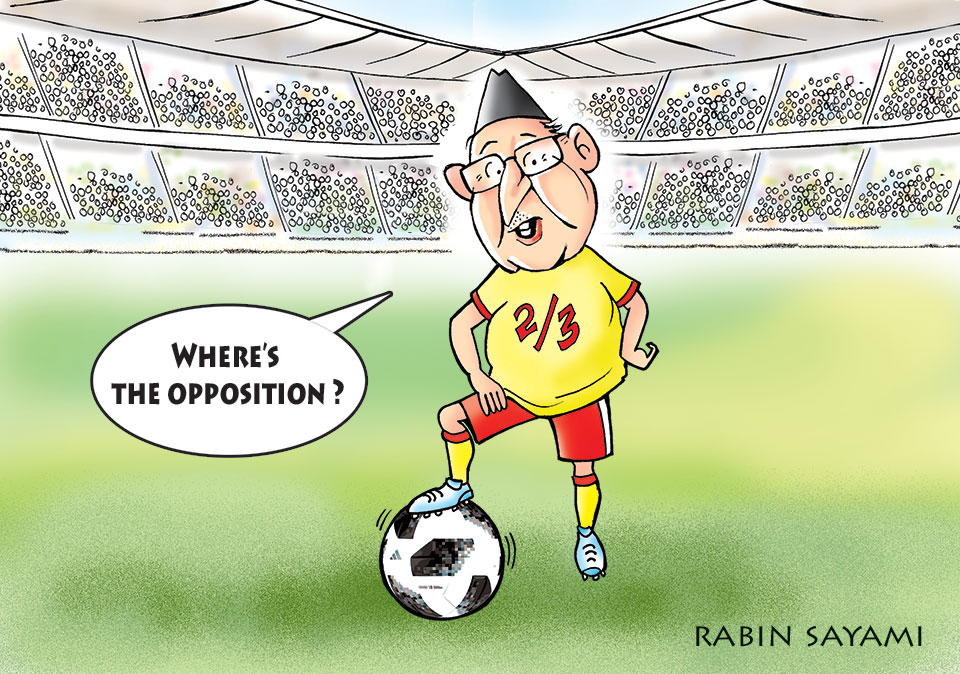 By selling unfathomable big dreams, the government may be able to fool starving people for a while, not always

The second term of Prime Minister KP Sharma Oli has unleashed the imaginations of our cartoonists. There is so much fun and entertainment in viewing cartoons published in the media. Due credit must be given to Oli for giving us an opportunity to laugh and forget our sufferings, albeit for a while.

Among several cartoons published in the media, two cartoons have drawn the attention of this scribe. The first one, published during the recently concluded world cup football match, depicts PM Oli and Comrade Prachanda inside a huge football pitch. Oli is poised to score a goal at his own goal post and Prachanda is giving advice not to do so saying: “You cannot score a goal in your own post,” to which Oli seems to be responding by saying “with two-thirds majority, the rules do not apply.”

In another cartoon, a huge inflated figure of Oli, raising two fingers in a V shape, is seeking to enter a narrow gate, ignoring imminent banging of his head, saying: “Why should a PM with a two-thirds majority bow down to enter this gate?” Both cartoons depict, in satirical terms, the impracticality of inflated egos of the PM flexing the power of two-thirds majority.

The cartoons also speak of the change in our political decision making system from, in the name of consensus decision making all party bhaagbanda system to the full display of two-thirds majority power. Oli exercised two-thirds majority power by indiscriminately firing public officials appointed by his predecessor Sher Bahadur Deuba. If he had done this at the start of his tenure, one could read it as policy change of the new government. That he has done it after five months in power only displays eccentricities in public decision-making.

The CEO of National Reconstruction Authority (NRA), Yubaraj Bhusal, who was at the PM’s residence, with his scheduled early morning meeting with the PM, was simply shown an exit door without informing him of the government’s decision to sack him. Oli demonstrated similar arrogance in case of Dr Govinda KC’s hunger strike as well.

A full display of flexing of two-thirds muscle power was seen in the Parliamentary Hearing Committee meeting on the appointment of Supreme Court Chief Justice. After nine days of dillydallying and behind-the scene negotiations, out of 15 members, 10 voted against Acting CJ Deepak Raj Joshee’s appointment, amid protests and walkover by Nepali Congress members.

Nepali people may have to wait for a while to grasp the full consequences of this display of power. If Joshee had declined to resign from his position (on moral grounds), probably, another bigger, and more powerful muscle would have been flexed inside the parliament to boot him out through impeachment.

What we have failed to understand is why the two-thirds power was not exercised within the Constitutional Council, chaired by PM himself, while recommending Joshee? Could it be that the PM is looking for an opportune moment and a venue to display two-thirds power? Our most popularly humorous and satirical festival, gai jatra, is around the corner. Be prepared for a big sitcom.

With less than one-third power, Nepali Congress is protesting against the regime for unconstitutionally occupying both seats of the Speaker and the Deputy in the Parliament. It seems to have forgotten the fact that you need ‘two’ to make two-thirds. Had it not been the case why would Nepal Communist Party be led by two presidents? They have also captured the seats of the President and the Vice President. In the days to come, to justify a two-thirds majority, don’t get surprised if they recommend two PMs to accommodate both Oli and Prachanda.

A small exercise on the display of a two-thirds power is already going on inside the parliament. We may have to wait for the full display when it comes to the amendment of the constitution and many other contentious issues. As a counter measure, Nepali Congress is already waging protests both in and outside the parliament.

By selling unfathomable big dreams like rail ways and water ways, hydropower and mineral water, or with promise of  paperless cabinet, one can fool starving people for a while, but at the end of the day, they will realize the mischief of the leaders like a boy does in Hans Christian’s The Emperor’s New Clothes.

In Support of a Non-Aligned Climate Ecology

Will the non-aligned countries take the necessary measures to avert the climate catastrophe that has been predicted since 1992? ... Read More...

Available statistics reveal that the province's capital outgoings have been minimal over the past four fiscal years. It's attributable to... Read More...