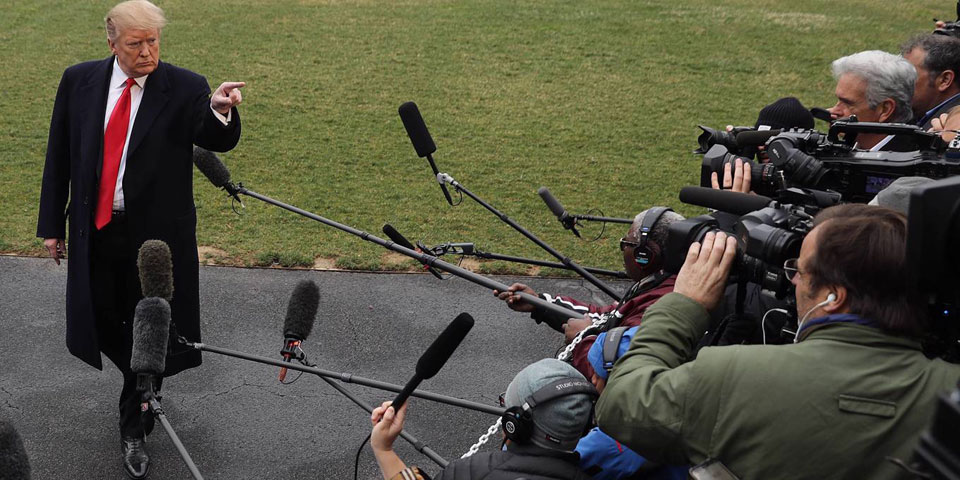 Reporters should not have to worry about being attacked by their own governments for doing their jobs. The norms that are now being destroyed won’t be easily rebuilt, regardless of who occupies the White House. But the future of global press freedom demands that we try.

LONDON – I had been captive in Afghanistan for about two weeks when the government of my home country, Canada, contacted those attempting to negotiate my release. They told negotiators to get me on the phone the next day, when the United States military would be flying a drone over where they thought I was being held, in order to determine my whereabouts.

The negotiators were unable to secure that concession. (I was released a couple of weeks later in a prisoner exchange.) But the US government’s willingness to help find me, a Canadian journalist who had been kidnapped while on assignment in Afghanistan, represented some semblance of a safety net for people doing a dangerous job. Eleven years later, that safety net is gone – and journalists are in more danger than ever.

Since my release in November 2008, 626 journalists worldwide have been killed while doing their jobs. Today, according to a tally by the Committee to Protect Journalists (CPJ), 64 journalists remain missing and 250 are in prison. And a new report by the United Kingdom-based charity Article 19 – named for the article in the Universal Declaration of Human Rights that enunciates the right to seek and receive news and express opinions – concludes that freedom of expression is at its lowest point in a decade, and declining.

In fact, three of every four people worldwide “are experiencing a deteriorating environment for freedom of expression,” the Article 19 report notes. Thomas Hughes, the organization’s former director, partly blames governments’ use of “digital technology to surveil their citizens, restrict content, and shut down communications.”

The current COVID-19 pandemic has made the situation even worse. As the virus made its way around the world, it gave authoritarian governments an excuse to seize even greater control over information. The Chinese government suppressed any reporting when the virus was first ravaging Wuhan, denouncing doctors who issued early warnings, and detaining others who tried to give voice to those warnings. It is now using state-owned media outlets to try to rewrite history. In Hungary, Viktor Orbán’s government has proposed new legislation that would allow authorities to punish anyone spreading “false information” about the virus.

Accordijng to a recent CPJ report, both authoritarian and elected governments are increasingly introducing legislation ostensibly intended to curb “fake news” and cybercrime, but which, in many cases, effectively criminalizes journalism. From Egypt to Turkey to Cameroon, journalists have been harassed, intimidated, fined, and detained over dubious claims that they were spreading fake news.

And when it comes to discrediting journalists’ efforts to hold the powerful to account, the United States – historically the world’s foremost defender of the free press – has been showing these countries how it is done. US President Donald Trump’s near-daily coronavirus briefings have devolved into attacks on reporters who challenge his lies and misinformation about how his administration has handled the crisis.

As New York Times publisher A.G. Sulzberger pointed out last year, by consistently mocking and threatening reporters and news organizations, Trump has “effectively given foreign leaders permission to do the same with their countries’ journalists, and even given them the vocabulary with which to do it.” And the Trump administration’s unwillingness to defend journalists has produced a culture of impunity.

Never was this more apparent than after the brutal 2018 murder of Saudi dissident journalist Jamal Khashoggi at the Saudi consulate in Istanbul. As the CPJ’s Courtney Radsch observed, Trump “very publicly decided that [America’s] economic and security relationship with Saudi Arabia outweighed concern over the fact that [the regime] murdered a journalist.” The Trump administration’s refusal to make any effort to hold the Saudis accountable was, in her view, “very influential to the decline in press freedom worldwide.”

A less-publicized incident from the previous year underscores the extent of the Trump administration’s indifference to the plight of journalists. According to Sulzberger, in 2017, a US government official contacted the paper to warn that Egyptian authorities were poised to arrest a Cairo-based Times reporter, Declan Walsh, over a report he had written linking an Italian student’s death to Egyptian security forces.

What stood out about the call, Sulzberger recalls, was that the official had made it without the blessing – and, potentially, against the wishes – of the Trump administration, because the State Department had apparently decided, uncharacteristically, not to intervene. Fortunately, the newspaper was able to get help from Walsh’s native Ireland, whose diplomats moved quickly to get him safely out of Egypt.

Reflecting on the incident later, Walsh wrote that “what has become increasingly clear … is that journalists can’t rely on the United States government to have our back as it once did.”

I can’t be sure what would happen if I were kidnapped in Afghanistan today. But, judging by the Trump administration’s record, it is safe to assume that the US government would simply shrug and question why I was there in the first place.

Yet it is precisely those countries that are beset by conflict or under the leadership of authoritarian regimes where independent journalists are needed the most. Fortunately for these countries’ people, brave local reporters continue to fight every day to expose corruption, ensure transparency, and hold the powerful to account, even if it means putting themselves in harm’s way.

This commitment can certainly be seen in Afghanistan. Two years ago this April, when I was back in Kabul on assignment, a suicide bomber on a motorcycle blew himself up not far from my accommodation, on a road behind the American embassy. As journalists rushed to cover the aftermath, a second bomber struck, killing himself and nine journalists, including Shah Marai, the AFP news agency’s chief photographer in the country.

It was the deadliest day ever for journalists in Afghanistan. But it did not stop brave Afghan journalists from working to share their stories with the world. On the contrary, it inspired a new generation of young reporters – many of them women – to continue the fight for truth and accountability.

Today, reporters globally are fearlessly tracking the spread of COVID-19, in a world where personal protective equipment means masks and gloves instead of Kevlar vests and helmets. They are telling the stories of the stricken, honoring the dead, and providing vital information to the public. Most important, they are debunking misinformation and conspiracy theories.

Reporters should not have to worry about being attacked by their own governments for doing their jobs. The norms that are now being destroyed won’t be easily rebuilt, regardless of who occupies the White House. But the future of global press freedom demands that we try.

Mellissa Fung is the author of Under An Afghan Sky: A Memoir of Captivity.
Copyright: Project Syndicate, 2020.
www.project-syndicate.org

NEPALGUNJ, Jan 30: Senior journalist and press freedom campaigner Panna Lal Gupta has passed away at the age 92. He... Read More...

AMSTERDAM – It has been more than eight months since Jamal Khashoggi, a prominent Saudi journalist and critic of his... Read More...