The soul of a wanderer


Rishav Adhikari, better known as ‘Shutter Psycho’ lives to travel. Last year alone he spent 185 days on the road and this year too the numbers are nearing the same. A travel content creator based in Pokhara, Rishav travels all around Nepal for various photo video projects. He is also associated with the travel group ‘Ghumante’, a community of likeminded people who focus on traveling to less frequented places around Nepal to make videos and take photos to bring spotlight to these often ignored locations. To sum it up, he is living the proverbial dream. 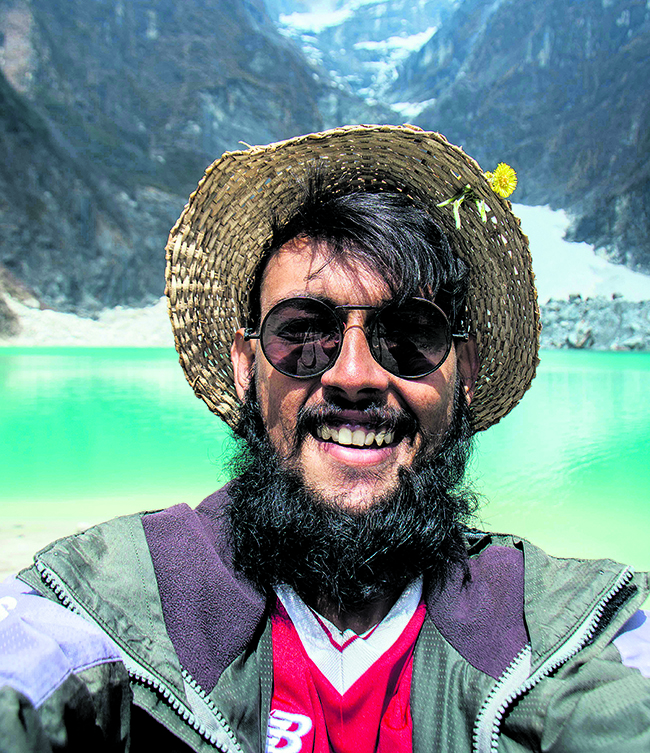 Rishav woke up to the reflection of the Annapurna Range on the Begnas lake every morning when he was growing up. “This is my answer when someone asks me why I love traveling so much. When you grow up seeing such scenes there is no escaping wanderlust and loving the wild,” he states. And this wanderlust has taken him from Mardi to Mohare, Ramechap to Rara Lake, and Bajura to Bardiya. And twice to Poonhill, Mohare, Lo Manthang in Upper Mustang, Everest Base Camp, and the Langtang region. He also has Gokyo lake, Renjo La pass, Gosaikunda, Paanchpokhari of Ramechap and Sindupalchowk, Khopra, Gufapokhari, Larke pass (Manaslu circuit), Rara lake, Phoksundo, Sikles and Kapuche lake covered. There are more, he says, but after all these years of traveling it’s rather hard for Rishav to keep track of every place he has visited.

Because he is a freelancer, his trips are spontaneous and he hardly knows where his next project will take him. “Being a traveler, you are never short of places to trek and the more you travel the more you know of places to go to,” he says adding that this makes traveling all the more thrilling for him.

There are moments when Rishav treks and certain things happen that he can’t describe as anything other than miracles. “I have cried gazing at the stars and mountains, smiled all day long watching the Phoksundo lake. I have seen the sun rise and set from so many places, in such spectacular settings that most people can only dream of,” he says. He adds that traveling gives him the freedom to be himself in the wilderness and he relishes that. “I’m just another happy traveler enjoying what life has to offer in the mountains,” he says.

In the past four years, Rishav hasn’t stayed home during the monsoon season or even on his birthdays. As soon as the janai purnima festival approaches, he packs his bags and sets off. “Monsoon is my favorite time to be in the wild. This is when you see nature at its best,” he explains. This year has been the same. He went to Sindhupalchowk with the team of Ghumante. Rishav considers it a blessing that there was scarcely any rain while the team was walking during the day that allowed for great views in the morning. Traversing through the lush green forest, finding wildflowers and playing in the waterfalls, the skies took an azure shade to dark grey. “It was a beautiful trip. Every trip almost always is,” he concludes.

His first trek
It has been about four years since I started traveling quite frequently. Gosaikunda was my first ever high altitude trek and what a trek it was. I have been to so many places but I remember this trek in detail. I trekked with my friends and it took us four days to complete the route. I was just learning photography then and that too I was just using my phone. I also had an Olympus camera but it had limited functions. So I borrowed a Nikon D5200 from a classmate. This was the beginning of my journey of becoming a photographer and traveler.

There is one incident that particularly stuck with me and inspired me to travel more. We had just reached Gosaikunda lake and the sun was setting. The sky was the most breathtaking shade of gold and the lake was frozen. It was a sight to behold. And I was so arrested I couldn’t feel a thing. Today, every time I see sunsets, I go back to what I saw at the top of the lake. You could say I travel for beautiful sceneries and this one really sealed the deal for me.

The most memorable trip
My most memorable trip would have to be the 27 days long camping trip that I went to last year in Upper Dolpo. That experience is everything that a traveler, photographer, and storyteller would want in a trip. We started from the plains in Tarai, climbed the hills and crossed mountain passes. In a country like ours where there’s something different to see at every turn, we witnessed more diversity in culture, tradition, food, flora and fauna than we ever imagined.

People think differently, what they eat is so peculiar yet familiar, their attires are unique to only them and to document all this while we trekked for 27 days in Upper Dolpo was an honor really. We crossed three 5,000 meter passes, camped by the Phoksundo lake for days, slept inside a thousand year old monastery, ate dal bhat without a morsel of vegetables and still asked for more.

We were out of any communication for 16 days and met so many extraordinary people with whom we shared our stories. I learnt then just how travel changes you as a person. Anyone who wishes to go to Upper Dolpo should go there right now before the roads are built. Only in its rawness will you be able to appreciate the true beauty of the place.

That starry night
Annapurna base camp was my first-ever solo trip. The day I reached Annapurna Base Camp, it was snowing very hard from morning to late at night. Visibility was so poor that I couldn’t even set my alarm. When you are in high altitude, it’s difficult to have good sleep. That day I woke up at one in the morning. I looked outside the window of my lodge and saw a very bright beam of light. Without my glasses, I couldn’t identify what it was. So I put on my glasses and looked out again. It was the stars. I laced my boots, grabbed my gears and got out, it was -10°C outside.  The mountains looked majestic with the stars shining brightly above them. I looked around and all I could see was an endless stretch of the mountains and stars and, in that odd hour of night, a star trail shot right above Machhapuchhre and then followed the shooting stars. I was so overwhelmed I cried while taking pictures. I have never in my life seen anything like it.

How skin deep is beauty?