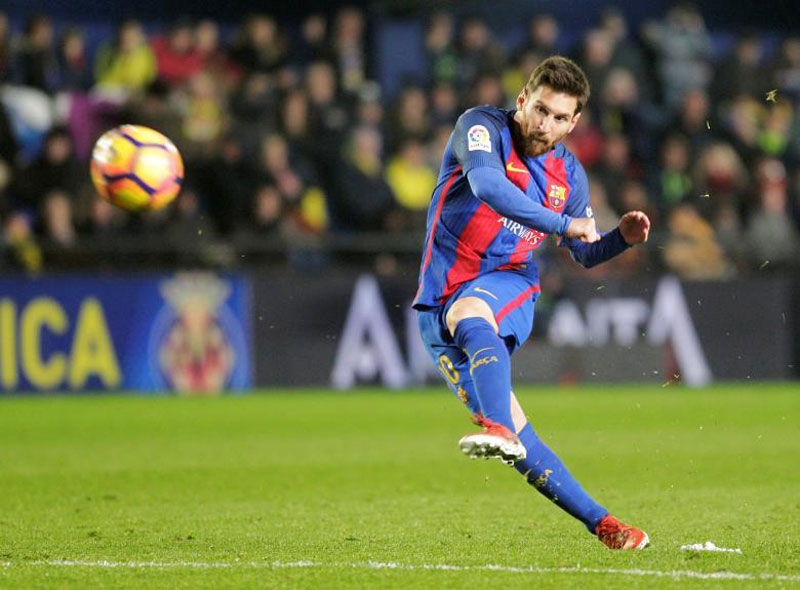 Cristiano Ronaldo versus Lionel Messi is the one debate which everyone in football, from fans to players to pundits, seems to have an opinion on.

The two phenomenons have taken the game to a new level over the past decade with their record-breaking feats and incredible consistency over such a long period.

Both Barcelona and Real Madrid will contest the Champions League quarter-finals shortly after the international break, but they've endured contrasting domestic campaigns.

Barcelona, who are still unbeaten in La Liga this term, have reached the Copa del Rey final and are set to regain the Spanish title, boasting a 15-point lead over third-placed Real.

Messi and Ronaldo have been instrumental for their clubs in the 2017-18 campaign, but there is unquestionable proof that Barca's magician has been the more complete player.

After a slow start, Ronaldo has sparked into life and been absolutely sensational in 2018, while Messi has been in sublime form for the majority of the season thus far.

The 30-year-old has scored 35 times in 43 matches in 2017-18, in comparison to Ronaldo, who has recorded a ridiculous tally of 37 goals from just 35 games in all competitions.

So, as you'd expect, they are topping the scoring charts for their respective teams, but it's only after examining other areas that you begin to see the difference between the pair this campaign.

THE DIFFERENCE BETWEEN MESSI AND RONALDO

Messi has more assists (16) than any other Barca player, but it's actually Karim Benzema who has set up the most goals (nine) for Zinedine Zidane's team this season (Ronaldo has seven).

Toni Kroos has created the most chances and Marco Asensio has made the most clear scoring opportunities for Madrid, but in both of those categories for Barca, it's Messi who leads the way.

Looking at passing, and it's midfield maestro Kroos and Messi again who have produced the most key passes per match for Real and Barcelona respectively.

WHAT DO THESE NUMBERS SUGGEST?

So, while Messi and Ronaldo have obviously scored the most for Barca and Madrid, the Argentine is also his team's best in many other areas - and the same can't be said for Cristiano.

This isn't a criticism of the 33-year-old, who has played eight less games - the man is an absolute goal machine - it's just yet another indicator that Messi is much more than a goalscorer.

The Barca man is a creator, a playmaker, heavily involved in build-up play and is number one for his club in almost every key statistic in 2017-18 - not just goals.

Messi, who currently has more goals (25) and assists (12) than anyone in La Liga this season, will travel with Barca to Sevilla on Saturday, while Cristiano and Real go to Las Palmas.

Michael Jackson has earned more in the past year than any celebrity - dead or alive - has ever earned in... Read More...