The plights of northern Gorkha 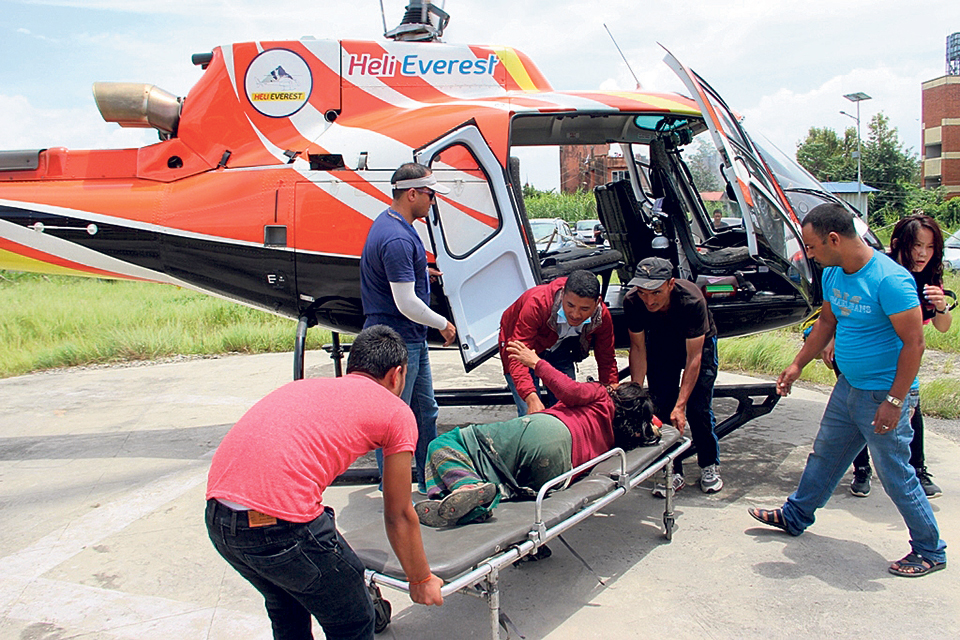 A woman in labor pain being shifted to a helicopter in Gorkha | Photo: Republica / file photo.

Locals have no option other than taking dangerous helicopter flights

GORKHA, Sept 10: On Saturday morning, a horrible helicopter crash in the dense forest of Mailungpakha of Meghan Rural Municipality-1 in Nuwakot district claimed the life of six and left one critically injured. Chowang Nurbu of Chumanubri Rural Municipality of bordering Gorkha died in the accident while Aaani Dolma Dikki of the same rural municipality survived with critical injuries.

The helicopter crash was not the first of its type. Helicopters taking off from northern Gorkha have been prone to accidents every year for the last three years. There have been repeated incidents of helicopters crashing into hills.

However, the locals don't have any other option than taking the risky helicopter rides. Dhan Bahadur Gurung, chairperson of Chumanubri Rural Municipality of northern Gorkha which lies near the Chinese border, said that the villagers are compelled to use helicopters due to the remoteness of the area.

“Be it for the treatment of the sick or for people injured, be it for the women who face complications during pregnancy and labor pain or for cremating the dead, we have to depend on helicopters for traveling out of our village,” said Gurung.

Gurung added that the locals even have to use helicopters for the transportation of materials of their daily use. It takes three days to travel on foot from the northern villages of Samagaun, Chekampar and others places to reach the rural municipality office. Gurung said, “Since it takes such a long time to travel, we have to rely on helicopters to travel out from our villages.”

The ones killed in the accidents include a tourist trekking around the Manasalu circuit to women in labor.

Last year, a woman who was facing complication during labor pain died in a helicopter crash while being taken to Kathmandu. Along with her, the health workers attending to her also lost their lives during the incident. However, a definite reason for these accidents is yet to be found.

“We have observed the competition between helicopter companies on who can operate more flights,” Chief District Officer of Gorkha Narayan Bhattarai said, adding, “One of the reasons for the frequent accidents is the priority given to quantity rather than the quality of flights.”

Most of the helicopters operating flights to northern Gorkha operate on a single engine. Many of the villages in the northern Gorkha do not even have off-road. Some do have roads but those roads are too risky to travel on foot. The health services in the area are very primitive. In these conditions, the locals have no other option than traveling on helicopters.

NUWAKOT, June 25: more than 8,000 people have filed complaints at the District Development Committee, Nuwakot, citing their names are... Read More...

19 injured on first day of Bisket Jatra
22 hours ago

NC should stand together: General Secretary Koirala
14 hours ago

Six houses gutted in fire in Kalikot
16 hours ago