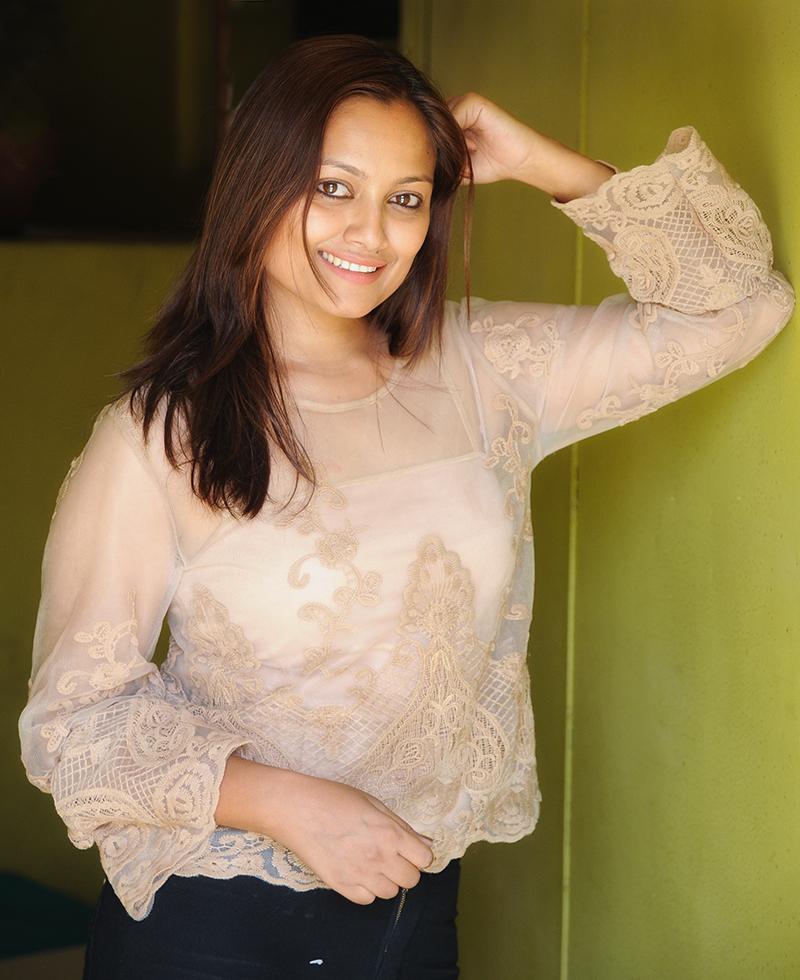 The third edition of Ekadeshma Film Festival showcased 99 movies from 43 countries at Kumari Cinema Hall, Kathmandu. The Bollywood veteran actress Manisha Koirala was to appear as a guest in a panel discussion ‘Women in films’. However, due to her unavailability, Nepali actress Reecha Sharma replaced Koirala in the panel that was shared by Ramyata Limbu, Sampada Malla, and Menuka Rai.

During the discussion, actor Reecha was vocal to express her dissatisfaction in a particular scene from the movie Chhakka Panja when the audience cheered for Raja (Deepak Raj Giri) opined that he’d slap Champa (Priyanka Karki) every night if he was to marry her.

The ‘Talakjung vs Tulke’ actor went further to state that the Nepali audiences were hypocrites who rushed to movie theatres to watch a movie 'Chhakka Panja ' which belittled the women but didn’t show up to watch 'Aadha Love’, a film which raised women-centric social issues. But the word sparked the fire. ‘Hypocrisy’ as Reecha implied was for the audience, including herself, claiming to ‘support’ women in everyday lives but laughed at derogatory remarks and jokes encircling women in the movies.

When the panel discussion video was released, the Chhakka Panja team fired back at Sharma’s words and reposted a series of Facebook posts, including those of Priyanka Karki and Swastima Khadka, actors of the blockbuster’s franchise demeaning the actor by ‘Get Well Soon’ remarks. It then started a debate among filmmakers and well-wishers as a disagreement between Reecha and Deepa.

But, it was never about Reecha Sharma versus Deepa Shree Niraula.

Sharma’s opinion in the panel discussion was dragged beyond its intended meaning to make it look as a conflict between leading cinema workers. Instead, it is more about filmmakers, their ideologies and how they reflect the society, particularly in the context of women’s portrayal and as a whole audience’s preferences or understanding of the cinema.

In the book ‘Media Issues’ by KM Shrivastava, women have been stereotyped in cinemas all over the world. The negative stereotypes like, 1) woman’s place is in home, 2) woman’s only asset is physical beauty, 3) they are masochistic to humiliations, indignities and physical violence inflicted on them, 4) the good women is a traditional housewife, 5) the working woman is undesirable exception and must be made to conform to social norms, etc. These things are not limited to the directors or filmmakers from Nepal or India but are same most advanced societies from Europe or Americas.

The movie 2000 movie ‘Malena’ is the perfect example here. Amidst the war climate, a teenage boy discovering himself becomes love-stricken by ‘Malèna’, the lead played by Monica Bellucci, a sensual woman living in a small, narrow-minded Italian town. The movie established Belluci as leading actor; the story was heart-breaking including all the stereotypes mentioned above. But it made to masses because it was a well-executed movie and required the actor to do everything that her character demanded. Movies are not a debate. A proper and complete execution convinces the audience.

A filmmaker cannot lament audience to be a hypocrite. If Chhakka Panja wasn't good, Aadha Love was unbearable too, not for story or content but the most important part, delivering the message. It is not about Chhakka Panja humiliating women and Aadha Love raising women-centric issues. It is more about how filmmakers are able to tell the respective story and convince the audiences. Not saying that Deepa and Deepak made an absolute gem of a movie. It had its plot holes but the end product was convincing, entertaining and the impression lasted on viewers. It was successful ‘movie-making’. It delivered.

But then Reecha Sharma didn't have to comment like she has been cheated or double-crossed by the viewers. Her movie ‘Aadha Love’ didn’t work because if failed in entertainment quotient or impressing the critics. A movie made on ill-practiced ancient social values ‘Jhola’ was liked and loved by masses. Similarly, ‘Sungaava’ represented women in Nepal like never before. It was critically acclaimed too. Most audiences loved it too. There have to be certain elements in the movie that is appreciated by a certain group of audiences.

Hostel Returns Director Suraj Bhusal quoted “Just make a movie what audience like” in a recent interview. But that can be termed as business, not filmmaking. Filmmaking is not a general store where one keeps only the goods that customers demand. Something the host of new filmmakers is falling traps too.

In the same panel discussion, the ‘Highway’ actor Reecha even termed Christopher Nolan (The Dark Knight, Prestige, Inception, Dunkirk) & Quentin Tarantino (Kill Bill, Pulp Fiction, Reservoir Dogs, Django Unchained) as art-directors. Reecha herself admitted that they have put some comic scenes in her new venture ‘Sunkesari’ which is a full feature horror movie in an attempt to lure the audiences on back of popular genre comedy.

Expressing your thoughts, making opinions, or being a critic, etc is one thing but making over the top comment by terming audience as hypocrites never reflects positivity. The panel discussion and the following disagreement were never between Reecha and Deepa. It was, in fact, an urge for filmmakers to reflect upon their works and find new avenues where not only women but the storytelling is strong too.