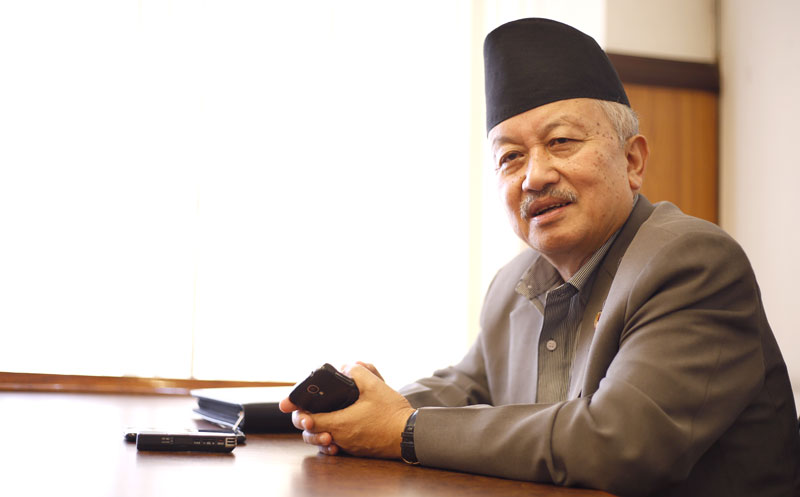 CPN-UML vice-chairman and deputy parliamentary party leader Subash Chandra Nembang had a bird’s eye view of the constitution-making process in Nepal, having served as the chairman of both the first and the second Constituent Assembly. The second CA led by Nembang promulgated the new constitution on September 20th, 2015, or more than a year ago. But its implementation has proven tricky. What are the shortcomings of this constitution? What are the major hurdles to its implementation? And what will happen if the three sets of elections are not held by the constitutionally-mandated deadline of January, 2018? Republica’s Biswas Baral and Mahabir Paudyal met Nembang, who is also a lawyer and a constitutional expert, to discuss these issues

The ruling parties have reportedly reached an understating with Madheshi forces on amending the constitution. Why is UML opposed to such amendments?
UML is not opposed to constitution amendment. Our only concern is vital issue like this should be discussed with us as well, as well as with other political parties. Let me take you back to the days when UML was leading the government last year. Nepali Congress had obstructed the House over the issue of constitution implementation. A high-level delegation led by Sher Bahadur Deuba had come to Baluwatar saying that the issue of constitution implementation was of paramount importance and therefore the bill regarding this should be discussed with his party before it was tabled in the parliament. They demanded that the ammendment bill be discussed with them before it was taken to the cabinet. This was a rational demand and we agreed to it.

But the opposite is happening today. We have Nepali Congress as main coalition partner in Prachanda government. But we come to know that amendments of far-reaching importance are being discussed only through the press. Shouldn’t such an important issue be discussed with us first? The funny thing is that they talk of making the constitution acceptable to all (sarbaswikarya) but they seem intent on bypassing the main opposition in the process. There are forces which have been claiming that the constitution that was endorsed by 90 percent of CA members is not sarbaswikarya. In the bid to accommodate the remaining 10 percent, a huge force that was behind the constitution is being bypassed. They (the government) have not told us a word about amendment. More surprising is the fact that they have not discussed it even within their own parties.

Are you suggesting that there is no need to amend the new constitution?
This is a wrong question to ask a UML leader. We are the ones who played a big part in getting the constitution endorsed by 90 percent of Constituent Assembly members. It was Congress, which, right after the promulgation, started saying that there should be immediate amendments in order to accommodate Madheshi parties. They thus proposed first amendment, which we supported. But did it resolve anything? Now the ruling parties are saying that one more amendment is necessary. They should first tell the people what good such amendments will do and how it will help with constitution implementation. If they come up with a good answer, we are open. But the government and its coalition partner, the Madheshi forces—I say coalition partner as they too voted in favor of formation of this government—have not brought any such proposal.

We get to hear amendments are planned on citizenship, provincial boundaries and languages.

None of these issues has been discussed with us. So it would be premature to comment on this.

It increasingly looks like the three sets of elections won’t be possible by the January, 2018 deadline set by the new constitution. In that case, won’t there be a constitutional crisis?
It will lead to now unimaginable crisis. But such a crisis can easily be averted as there is enough time. January 2018 is a deadline the three parties had agreed to because they knew that it would be possible to hold three elections by that date. But the new government does not seem to be serious about elections. The previous government had a clear timeline for such elections. The new government does not have any such timetable.

Political unity is a must for implementing the constitution. The ruling parties need to take the initiative for this. But I don’t see any progress in this. There is a constitutional obligation to enact election laws within certain timeframes. There are other constitutionally mandated things to be accomplished. Holding three elections by January, 2018 is one such mandate from which there is no escaping. For this, the relevant laws should have been enacted. But none of these things have happened under the new government.

Let us assume the elections cannot be held on time. What next?
You cannot imagine the consequences. There will be no legislature to which the government will be accountable. Many serious questions will be raised. It will lead to a serious political and constitutional vacuum. Until 1990, the constitution used to be given by the king. Because we said such a constitution was not acceptable to Nepali people we elected a sovereign Constituent Assembly for the purpose of drafting the constitution. If this constitution also fails, there will be no other way to bring another constitution. This is why I have been emphasizing that all parties need to be serious about implementing this constitution. I have been telling the parties that we need to have a definite timeline and start working to complete the constitutional tasks within that timeframe. Otherwise, we will be pushed into an unimagined crisis.

Some also say that if you, as the CA chairman, had delayed the constitution even by a few weeks, many of the problems that we now see with its implementation could have been averted.

I don’t think so. Looking back, if I had delayed the process even by a week, we might not have a constitution at all. Look what is happening now. The major parties are still debating contentious issues, the same ones they were debating a year ago. If the constitution had been delayed, we would still be stuck. There would be no constitution. And then you would have said that the constitution would have come was it not for the obstructionist CA chairman.

How do you evaluate the dissatisfactions that have been expressed over the new constitution?
When people talk of dissatisfaction with the constitution, we need to remind ourselves of a few things: How is the constitution promulgated elsewhere? What percentage of lawmakers must participate to guarantee its acceptance? Ours is the statute that was signed and ratified by more than 90 percent lawmakers. By contrast, India’s was ratified by only 65 percent and America’s only 52 percent. The constitutions of the US and India have become sarbaswikarya, acceptable to all. But why is our constitution, which had the backing of over 90 percent lawmakers, considered incomplete? I don’t understand this logic.

About 10 percent of then CA was dissatisfied with the constitution. This was not because we had not tried to accommodate those forces, but because the process to bring these dissenting groups was taking too long and ultimately failed. Are you saying that the constitution should have been according to the wishes of the 10 percent lawmakers while discarding the wishes of the 90 percent lawmakers?

Why is UML the only big party that is pushing for timely elections?
Looking at the way other parties that are trying to defer the local polls indefinitely, it makes one wonder what they are up to. Where do they want to take the country? UML has a clear stand on elections of local bodies. We are in favor of a small number of local units. We have local bodies restructuring commission formed under this constitution. This commission had the support of all the major forces. And yet its recommendations are now being questioned.

In a recent meeting, the ruling parties proposed making ilakas the main basis for determining the number of local units. UML was ready to be flexible on this proposal, if it ensured timely local polls. But then some parties started demanding that the commission be dissolved and that they would disrupt local polls if things are not sorted out in their favor. It is strange that the forces that were instrumental in the formation of this government should come up with such obstructionist stand.

Say other parties manage to garner two-thirds support of the parliament for the proposed amendments, even without UML on board. What will UML do in that case?
We are a party which believes in democratic process and rule of law. We had accepted even the constitution of 1990, but with some reservations. So this is question you should rather be asking those in favor of amending the constitution in any which way.

How do you evaluate the role of foreign actors in our constitutional process?
I have been telling my friends from all the parties that we must not create any space for foreign actors, which allows them to interfere in our internal affairs. Strong internal unity is a must for this. There is a saying in Nepali that if you do not stop quarreling among yourselves in the family, your neighbor will soon start lecturing you on peace and harmony. If the three big parties remain united when it comes to implementing the constitution, foreign actors will not get any space to interfere. Even on the eve of promulgation of the new constitution, there were forces that wanted to stall the process.

But they didn’t succeed as the political parties were united. Such unity is also the only weapon to thwart the design to derail the constitution.

JHAPA, Oct 17: After India implemented Goods and Service Tax (GST) from the first of July this year, illegal trade across... Read More...