The man who never gives up 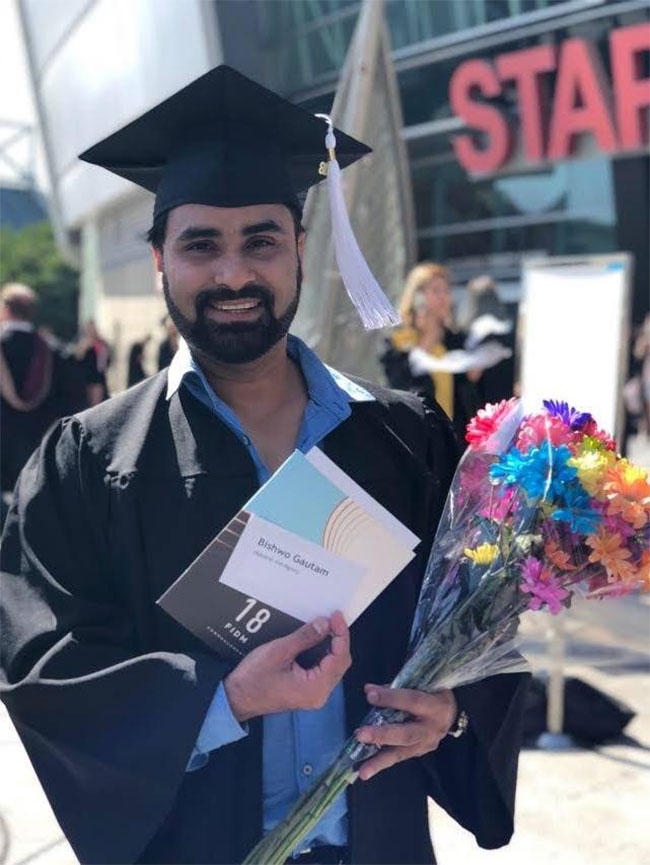 Bishwo Gautam, a well-known name among fashion enthusiasts, lives by a motto ‘Never give up!’

Recalling his love for fabrics and keen interest in designing, Gautam shares, “I was fascinated by the fabric and I used to feel mom’s saree and design shirts for myself using different fabrics.” This passion led him to pursuing his graduation in fashion designing in 2007 from Namuna College of Fashion and Technology, Bansbari.

After completing his fashion studies, he began to pursue his fashion designing career and, within a short span of time, established himself as one of the prominent fashion designers . “My experience of working at an export house as a supervisor for three years helped me excel myself as a professional fashion designer,” he says. It was in the year 2008, he started his own company with five sewing machines and seven employees.

According to him, with his hard work and dedication it took him no time to see his company grow in size with 500 sewing machines by 2010.

He says, “This was possible because I have thrown myself heart and soul into it and worked for 18 to 20 hours a day.” He was always cherishing a dream to organize a fashion show. Therefore, he organized a solo fashion show with a theme “Lead the Fashion” and that formed history in the field of fashion industry in Nepal in 2011.

In 2013, he felt an urge to learn more in this field and to quench his endless thirst for more in-depth knowledge about the world of fashion and its new technology, he joined Parsons School of Design in New York. “Due to some health issues, I could not stay in New York for more than six months as the winter was terrible for me and I had to travel thorough subway which was quite suffocating,” shares Gautam.

He further says, “I found another best school named Fashion Institute of Design and Merchandising (FIDM) based in California and received a degree with 3.95 GPA. Bishwo Shares that not only he learned basic education about fashion design and management during his school days at FIDM but also found the level of confidence to somewhat have increased adding that before he used to hesitate to speak with other people but now he is enthusiastic to do so.

Gautam believes fashion is not only about clothes but it is all about the way you live and the way you present yourself. “And with the ever-growing internet and easy access to designer, today’s Nepali youths are following fashion trends and are highly fashionable at best,” he says.

The achievements he has made so far include the best designer award in 2012, professional successful awards and various appreciation awards both from national and international shows. Likewise, Gautam was also featured in Huffington Post in 2016. “At present, I have been working for the rearrangement of the company and collections for a solo show which is going to be held within three months in Kathmandu” shares Gautam.

He advises aspiring fashion designers to focus on learning first before involving themselves in some internship with noted designers and learn the basics of the profession before jumping into it.

Govt extends lockdown by a week, borders to remain sealed

KATHMANDU, March 30: The government has decided to extend the nationwide lockdown for the second week until next Tuesday as... Read More...

Nepalis in Japan fearful due to coronavirus

TOKYO, March 29: Ganesh Khaniya Nepalis living in Japan are living amid threats of coronavirus outbreak as it is fast... Read More...

Rasuwagadhi and Tatopani borders yet to come online
21 hours ago

32 tourists rescued from Manaslu
23 hours ago

Amid rising coronavirus cases, govt extends nationwide lockdown by a week
11 hours ago