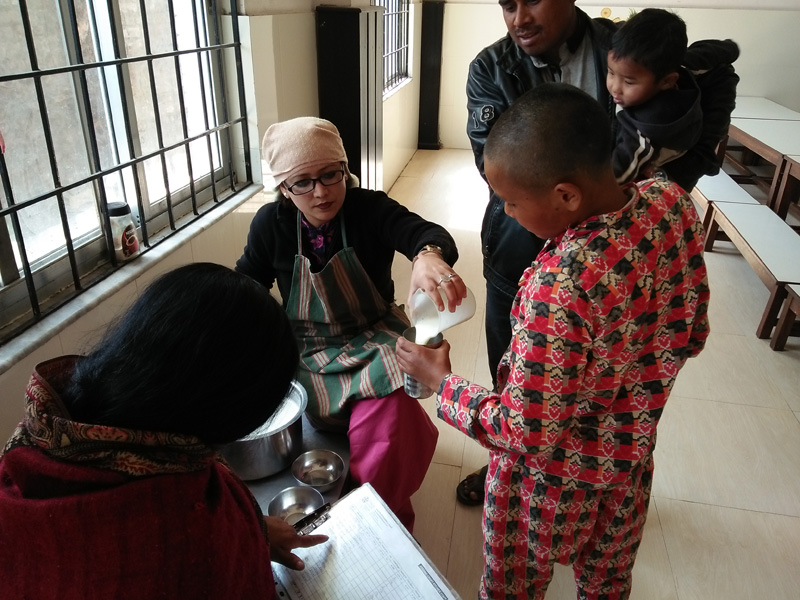 So how many times did you forget to feed your son? Shanti Maya* recalls one of the curious mothers at the malnutrition rehabilitation center asking her just a couple of hours after her arrival. She clearly found the question to be upsetting. Even now, Shanti insists that she genuinely believed that her boy was born to be that way, skinny and short. She never considered it to be a medical issue.

It’s a view that she has been forced to change, ever since a field worker of the center visiting villages in Dang examined her five-year-old and declared him malnourished. Starting from that point on, Shanti says she has been asking herself this question:  “Did I not feed my son properly?” And annoyingly enough, she confesses she hasn’t been able to come up with a solid defense for herself.

At the moment, she and her son have been brought to Sunakothi, Lalitpur by the center to rehabilitate her son as well as give her classes on nutrition. Shanti reveals that she is suddenly aware of the many places where she slacked off and made mistakes. She talks of feeling these new pangs of guilt every now and then. In fact, she even requests for anonymity. She doesn’t want to be known as ‘that’ mother.

But Saroj Sharmakar, field worker from the malnutrition rehabilitation center who had spotted Shanti and her five-year-old in the first place, reassures her that she isn’t the only Nepali mother or parent who is unwittingly causing her child to be undernourished. In fact, there are too many.

The Government of Nepal, in collaboration with the Food and Agriculture Organization (FAO) might have officially launched a National Action Plan to eradicate hunger from the country by 2025, but to accomplish such an ambitious feat Sharmakar, from his experience on the field, can see that they will have to start at root level itself by factoring in these cases.

The malnutrition rehabilitation center brings groups of children and their guardians on a regular basis. So far, they have treated 4,042 children and though they were from different parts of the country, the cases reportedly share many similarities.

“The level of ignorance on nutrition and healthy food among Nepalis is actually unbelievable. This lack of awareness is still one of the main reasons behind the country’s malnutrition problem. We see it all the time in the fields,” says Sharmakar, “The kids are fine while they are breastfeeding. It’s always when they start going to schools that they show signs of malnutrition.”

In most cases around the rural areas, kids not only have to walk an hour or more to reach their schools, Sharmakar shares that he found out they don’t get to eat anything all day after their morning meal. At most, it’s a handful of beaten rice and bhujiya. Even when they return home, in most cases, their parents tend to be so busy that they don’t have time to cook meals in the afternoon. They have to wait till dinner. It’s a pattern that Sharmakar has witnessed in many villages across Nepal that is affecting the health of Nepali children.

Then there is the question of the kind of food that many Nepalis tend to consume. Apparently, we don’t even have to go far off to rural areas. Just 20 to 25 minutes drive from the Bhakatapur highway in a Tamang community, Malnutrition Prevention and Treatment Program’s program coordinator, Sunita Rimal says they recently spotted surprisingly many cases of malnutrition.

“People from this community were short but didn’t exactly look sick. Upon inspection though, we discovered that most kids and some adults alike were under nourished. It came down to their diet. They gave way more importance to the quantity of rice on their plate and almost none to the vegetables,” shares Rimal.

Sharmakar further adds that there are also communities that don’t even eat their meal in the standard Nepali way by mixing their dal, curry and rice. This normally ends up with them consuming either large amount of rice or dhedo (more popular in rural areas) or potatoes. As long as it fills their stomach, they tend not to care of the nutrients that they are missing out on.

Thus, projects like that of Rimal and Sharmakar find itself teaching communities from scratch. They need to start from the basics, introducing various food items that offer different nutrients and on ways how they should be consumed.

Along with lack of awareness and general ignorance, Rimal and Sharmakar also believe that poverty and the immense work load of folks in the rural areas also contributes to most Nepalis’ under nourished health. This stance has apparently been proven time and again, while working on the field.

Sharmakar elaborates, “I have come across farmers who would much rather sell their vegetables than consume them. Their village may supply multiple trucks of vegetables to municipalities twice a week but I didn’t see any vegetables or eggs in their kitchens.”

Rimal says she has also spotted many villagers selling their vegetables and buying junk food like instant noodles with the money to feed their children. The mothers that she has talked to are almost always burdened by their work load and, in cases like this, the easy availability of the quick meal is becoming a tempting option. Further, this wasn’t the only effect their hectic rural life was having on their food habits.

“When we visited the kitchens, we almost always spotted leftovers that they were planning to eat later. Since they don’t have the time to cook three times a day, most household have the custom of cooking their food all at once. Further, the kids are left with the responsibility of taking care of themselves and their siblings. In many cases, the eldest child cooks the food. The parents are too busy trying to make a living,” says Rimal.

So when the malnourished kids are taken to the rehabilitation center, they and their guardians, often the mother, are not only provided with free nutritious food but also lessons on how to manage their daily diet. From ways to wash and cook spinach so as to not rid it of its nutrients to ways to make a healthy lito, the center encourages the patients to reap the benefits of their own local produce.

After the usual two weeks or in required cases a month’s stay at the rehab center, when a child returns home, Sharmakar, who often goes for follow ups, says that the other locals tend to ask him about the “city food” that they have given the patient to restore his health. Sharmakar also sees it as an opportunity to spread the word about malnutrition.

He says even today he begins first of all by establishing the fact that being malnourished is a health issue. Like Shanti, this concept is still news to many people in rural areas. Even the fact that their own produce can be the solution, Sharmakar says, still tends to surprise a few.

Even such basic awareness and education though has proven to be crucial in their fight against malnutrition. The M=malnutrition rehabilitation center’s record shows that from the 4,042 children they have taken care of so far, they have an average of 88 to 90 percent success rate. The analysis of the failure cases shows that the main reason behind the relapses is poverty.

So at the very least, 88 percent of those children and guardians who do go through the treatment implement all they learn about nutrition. It proves that they are capable of changing their daily diet pattern as their awareness level increases. And as somebody who has worked in the field for more than a decade, Rimal, considers this a significant finding. If we, as a nation, are to reach our goal of eliminating hunger in the country, this might just prove to be a crucial step in the process. 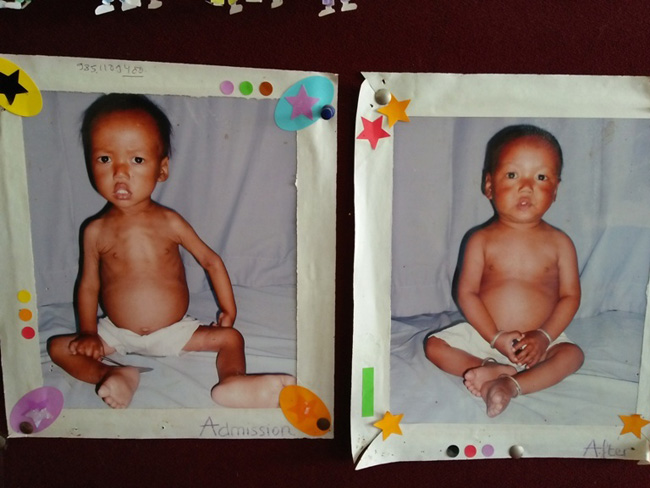 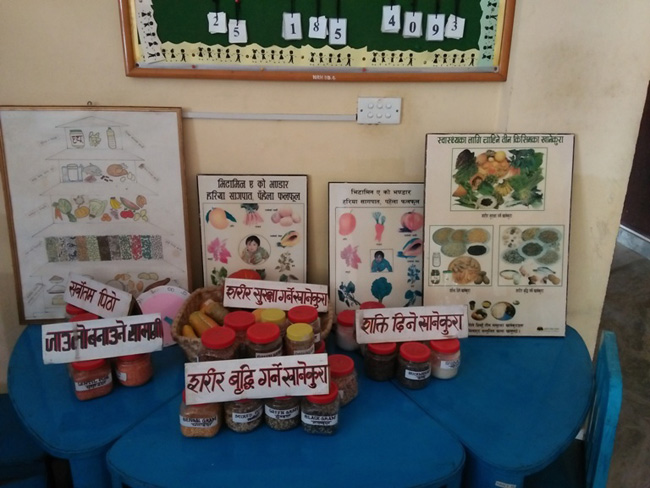 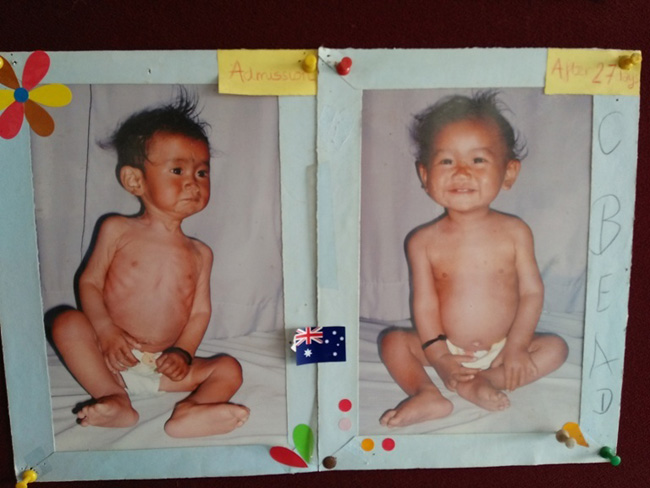 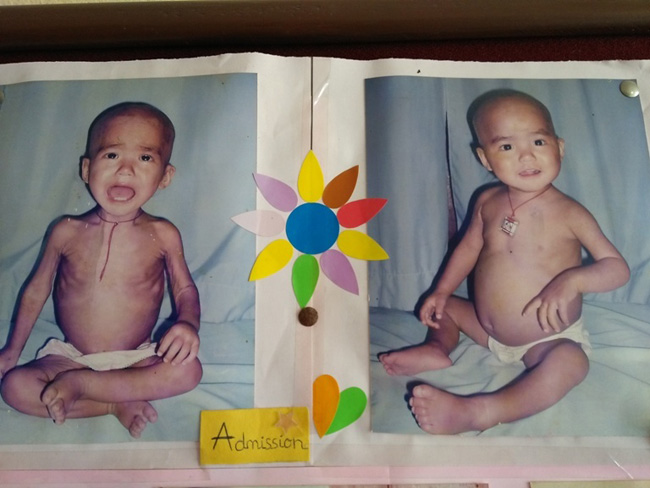